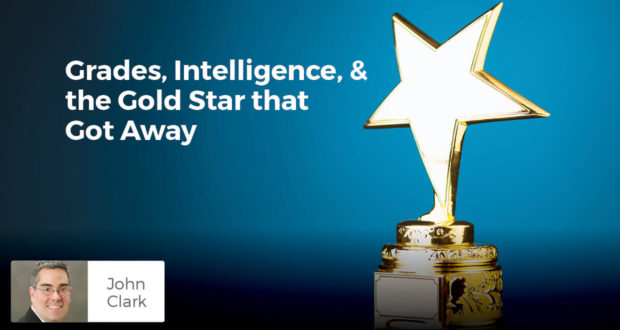 Grades, Intelligence, & the Gold Star that Got Away

John Clark offers a poignant reminder that we need to recognize and encourage a child’s intelligence with all their activities, not just the academic ones.

When I was in the Fifth Grade (the last year that I went to a day school—I would homeschool henceforth), my best subject was Spelling.

Luckily for my ego, everyone knew I was a great speller because my teacher had a chart on the front wall that had each student’s name on it along with their weekly spelling grades beside. If you were one of the fortunate few who received a perfect score, you were awarded the proverbial “gold star” by your name. After twenty weeks or so, I had about twenty gold stars—the hottest streak of my academic career, before or since. A veritable hat trick of orthography.

Alas, like most of my (five or six) academic highlights, it was fleeting. Around Week 21, I used the wrong preposition in my spelling workbook and received a 98%.

Years later, I came across these words of William Shakespeare: “All that glitters isn’t gold.” Later in life, some of the students in my English Literature class—mere neophytes to the art and science of literary criticism—may not have fully understood what Shakespeare meant with those immortal words. But I knew darn well what he meant: clearly, Shakespeare was illustrating, in no uncertain terms, that a 98% does not get a gold star in Fifth Grade spelling class.

My chart at the front of the room contained twenty little boxes with shiny gold stars in them, and one box with a surprisingly-clearly handwritten “98%” in it. Guess which one I stared at every day?

Maybe the fact that I obsessed over this grade made me unique; on the other hand, maybe it made me just like everyone else.

You can claim that this type of thinking is ridiculous. You can claim that a person should not define himself by any grade, let alone his worst grade. And you’d be right. The problem is that this concept can be a hard thing to accept, or even understand, when you are eleven years old. After all, for all life’s facets, for all life’s endeavors, most of us are graded on academics and academics alone. And that can be a bit ridiculous, too.

Even later in life, many adults tend to define themselves by the grades they received decades prior. They may have been deemed “poor students,” and they believed it. But in some of these cases, it was not that the students were unintelligent; it was that the teachers failed to recognize intelligence.

But while there are many manifestations of intelligence and of genius, much of academia tends to reward exactly one: book smarts. And even “book smarts” tends to be narrowly defined due to its emphasis on mathematics. Sadly, the vast majority of genius remains academically untested and thus, ungraded, unnoticed, and unrewarded.

I understand the need for grades, but I also believe that each of our children’s unique manifestations of intelligence should be acknowledged and encouraged.

Gardner argues that intelligence is “a property of all human beings.” That’s not a bad message to your children who are struggling with mere academic learning. It’s also a reminder that God loves them uniquely.

The lesson for parents here is simple. We need to disallow our children to define themselves by grades and tests. We need to recognize and encourage the intelligence and genius of all their activities, and not just the academic ones. Above all else, remember that loving God is the greatest genius of them all.

Oh, and one last thing. Please remember to help them with their Spelling homework.