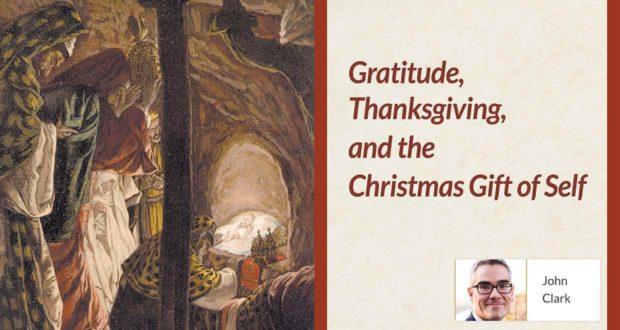 Gratitude, Thanksgiving, and the Christmas Gift of Self

John Clark says that in a year that God has watched over us so carefully we are called to offer the gift of gratitude to the Infant King and to each other.

For many of us, 2020 has shaped up to be a year we would happily forget.

Illness and paralyzing fear jockeyed for position as to which was the more damaging pandemic. Churches were locked and the sacraments were made unavailable for weeks. Elderly people were left terribly alone. Many people lost their jobs or businesses, and many others worried about losing theirs, too.

As we look back on the year after all this, our first reaction may not be gratitude. But as we travel down the path of Thanksgiving, Advent, and Christmas, gratitude must lead the way.

Romano Guardini, one of the favorite theologians of Pope Benedict XVI, writes that “Giving and thanking, which lift man above the functioning of a machine or the instinct of animals, are really the echo of something divine.” Guardini makes a powerful statement, but one that is backed by Scripture.

Consider the institution of the Eucharist. As Luke 22:19 reads, “And he took bread, and when he had given thanks he broke it and gave it to them, saying, ‘This is my body which is given for you. Do this in remembrance of me.’” Jesus gives thanks and then gives Himself.

Both in giving and in thanksgiving, we must imitate Christ.

And that brings us back to the current mixed-up world in which we find ourselves. Some might say that it’s easy to give thanks when times are good, but it is tough to give thanks now when things seem so bad. But let’s be honest: even prior to the events of 2020, we had largely forgotten how to offer thanks. Guardini points out that gratitude has been largely replaced with acknowledgment, a fact evident even at Christmastime:

“We need only think of the mad rush of giving and receiving at Christmastime….(W)hat determines the general sentiment is not asking and giving but the announcement of rights and their satisfaction by means of organized associations. And the response is not gratitude but a receipt; then, the matter is properly settled.”

We need to do better than this.

Many years ago, Socrates pointed out that teaching and learning—if properly performed—were essentially indistinguishable activities. And this makes me think that giving and receiving—if done properly—are also indistinguishable. To give the gift of oneself is to offer thanks; to offer thanks is to give the gift of oneself. Isn’t that what the Magi were doing as they encountered Baby Jesus?

Their gifts and thanks were present in the very same act.

This was a point not missed by a writer named William Sydney Porter, more commonly known as O. Henry. His short story, The Gift of the Magi, tells the story of a young husband and wife, Jim and Della, who love each other very much but lack the financial resources to buy each other a material gift.

On Christmas Eve, the idea comes to Della that she can sell her long, beautiful hair, and buy her husband a last-minute gift. With the $20 she earns from the sale, she buys Jim a chain for his pocket-watch. What she doesn’t know, but soon discovers, is that Jim has sold his watch to buy his beloved Della combs for her long hair.

At the end of this difficult year—a year in which God has watched over us more carefully than we could ever know—we need to present the gift of gratitude toward the Infant King and toward each other. If we can do that, then we are the Magi.

Dear Seton friends and families, thank you for reading my columns again this year! Your kind comments have been a wonderful gift. Please keep me and my family in your prayers, and be confident that you remain in ours. And here’s to a healthy and happy 2021.