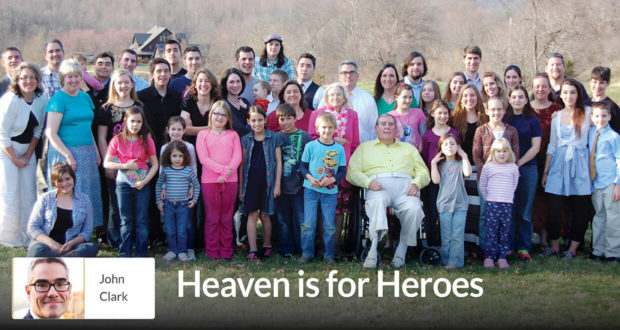 Heaven is for Heroes

John Clark is confident that he will walk in his father’s footsteps all the way to the house built for him in heaven. And he knows just how to find it.

January 10, 2022, Bruce Clark passed to eternal life. For the eighty-six years of his life, he was many things: son, husband, father, grandfather, great-grandfather, athlete, soldier, pilot, carpenter, entrepreneur, and musician.

Since I began writing this column fourteen years ago, I have devoted many pages to describing these pursuits. But if you readers will indulge me one last entry about my father, I would like to tell you about the final years of his life. Because as it turns out, of all the lessons my father taught me, he saved the best for last.

Many of my Dad’s accomplishments in life were physical, if not super-athletic. Even at the age of sixty, he dreamed of playing softball in the Front Royal church league with us. He also dreamed of going on the senior golf tour. 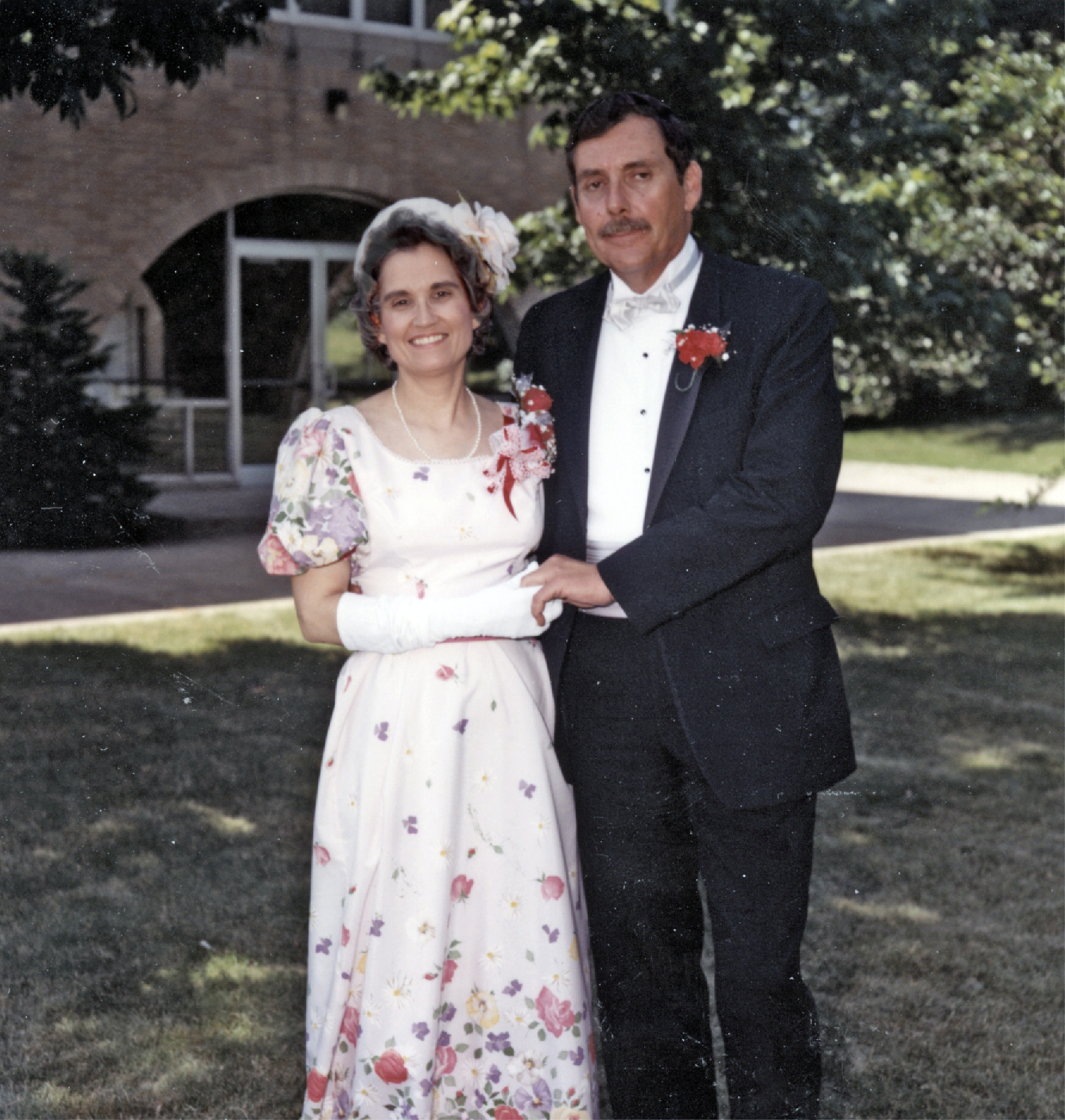 But these things were not meant to be. Because at the same time, the doctors told him that his leg was experiencing massive circulatory problems and that he would need an amputation. His leg was amputated at mid-thigh.

By that point, my Dad had already done his share of suffering.

During a combat mission in Vietnam, my father parachuted into a tree in enemy territory; consequently, he endured shoulder and back pain for the rest of his life. So his amputation added to what was already a frequently agonizing daily struggle. When he lost his leg—especially considering all the recovery that he and his body still had to accomplish—some people might have thought this would be the end for him.

Casual onlookers might have thought he was supported by his crutches. He was not; he was supported by Christ. For nearly three decades, my father leaned on his Savior for strength. And with three legs, they walked to Calvary together—as two friends on one final mission, as friends focused on a common destination.

But it was a tortuous journey.

As a Special Forces soldier in Vietnam, my Dad was taught to perform rescue missions. If that meant parachuting into enemy territory, so be it. Once he removed his green beret for the last time, he must have thought his days of rescue missions were over. But his greatest rescue mission lay ahead. Let me explain.

From the day of the amputation, it was no longer athletic prowess but pain that became my father’s constant. In addition to all the other physical difficulties, searing phantom pains ravaged him for minutes, hours—even days—at a time. Sometimes his pain was so intense that it would literally take his breath away. Some nights, as I would hear him gasp in agony, I would silently beg Our Lord, “Dear God, please let his pain stop.”

But as I was making this plea to God, my Dad offered a different prayer. His prayer was that his sufferings would “get just one more soul out of Purgatory.” I’m not sure where or when my father developed that devotion to the souls in Purgatory, but there is no doubt that he had that devotion. My Dad believed that there was a soul who had almost suffered enough in Purgatory to get to Heaven and that his sufferings on a given night could help him get the rest of the way. 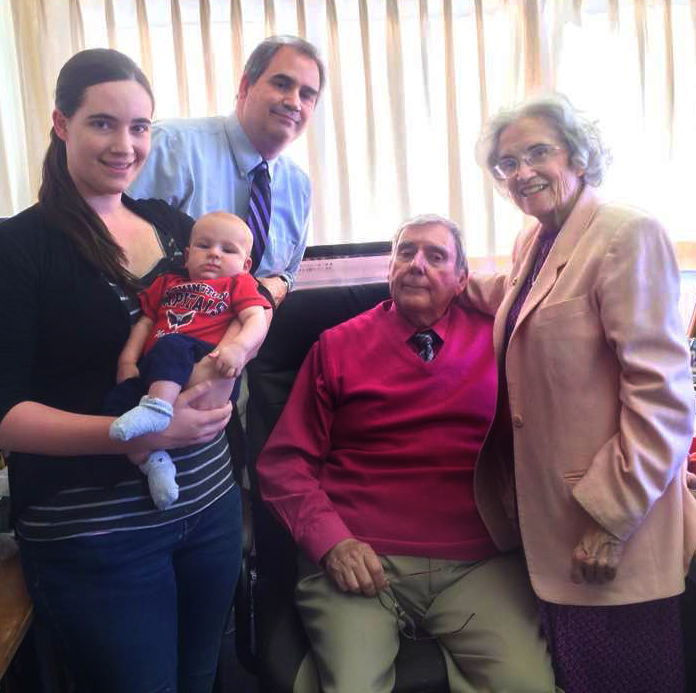 For nearly three decades, my father conducted a rescue mission to Purgatory. For a quarter-century, it’s as though my Dad traveled to Purgatory, saw the suffering souls, and assured them, “Follow me. It’s time to go home.”

It is said that if your prayers and sufferings help release a soul from Purgatory, that soul will pray for you for the rest of your life—hopefully, all the way to Heaven. I can now envision the greeting line of Heaven as my father entered Paradise—so many souls lined up to throw their arms around the man whose pain helped end theirs.

When my Dad first lost his leg, I think he felt frustrated and sad, pondering all the things he could no longer do. That period of my Dad’s life lasted approximately forty-eight hours.

And then he got busy.

You see, with all the lessons he had learned over the years, no one had ever taught him to give up.

He redirected his efforts and focused on what he could accomplish. He began writing—a lot. Starting with The Custer Legacy, he wrote several full-length novels, including The Castro Conspiracy, The Blood-Red Flag, and Redcoats and Rebels.

I attended numerous books signings with my Dad over the years, and it was fun to witness so many people come back to buy his latest novel. He always had a story for them, along with a note of encouragement and a signature. My Dad was properly proud of those novels.

But there was something that he was much prouder of and loved much more than his novels. And that was you, students. He began teaching American history to thousands—tens of thousands—of you Seton students.

He wrote history books and blogs and made dozens of videos explaining historical events. Over the years, he took phone calls from thousands of parents and students. He graded mountains of tests and essays. He wrote recommendation letters to help Seton students get accepted to college.

And you know what? He loved every second of it. He loved you.

Officially, my Dad had seven kids on this earth. Unofficially, he had seventy thousand. Over the years, when my Dad spoke about you students, he would always refer to you as “my kids.” When I visited him some evenings, he would smile and say things like, “One of my kids wrote a great history essay today.”

I believe it is important you know, in so many ways, that you students kept him going. You made sure he did not have time to get discouraged because he was so busy teaching you.

So, even if you never realized it, you played a huge and positive role in my father’s life.

The Christmas Lights Of Heaven

One of my father’s favorite sayings was, “A soldier who dies in battle while saying a prayer will finish that prayer in Heaven.” So while I will pray for my father until I join him in Heaven, I am deeply consoled by this: my father’s entire life was a prayer.

Since I learned on January 10 that my father had passed away, I’ve been thinking a lot about what my Dad is doing in Heaven right now. With his glorified body, he’s certainly been playing baseball with those men who used to play for the Cleveland Indians but were called up to a better league.

I’m sure he’s been reacquainting with his Green Beret squad—those men who have waited patiently for him to rejoin their unit. I imagine he’s been enjoying his mother’s Scottish shortbread cookies, baked with love in Heaven.

But I’ve also been thinking about something else. At His Ascension, Jesus assured us that he was going to Heaven to prepare a home for those who love Him. My father, a master carpenter in addition to all his other skills and talents, was constantly doing home improvement projects, whether it was building a ramp for his wheelchair, building bookcases for his wife, or building a cabinet for his classic-film DVDs.

And I wonder if my Dad is helping Jesus prepare a home for his family in Heaven. After all, my Dad’s family will need a rather large house. Psalm 128 assures us that it is a great blessing to see our children’s children. Bruce Clark did that one better. He lived to see his children’s grandchildren. And he will certainly want us all to visit him in our heavenly home.

I’ve written previously about my Dad’s love for Christmas and that my father made sure to put Christmas lights on our family’s house every year. So maybe that is my father’s job: to prepare the Clark house in Heaven with sparkling lights, colorfully announcing the perpetual love of Jesus.

With the sanctifying grace of God, I have good hope to walk in my father’s footsteps all the way to that house. And I’ll know just how to find it: the house in Heaven with all the Christmas lights.