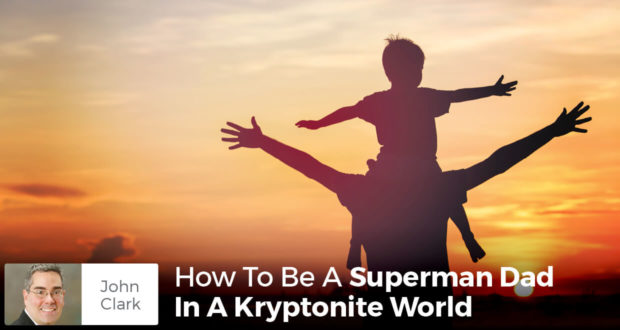 How To Be A Superman Dad In A Kryptonite World

A father is often seen as Superman to his child. As John Clark found, to live up to that, we must first discover what our Kryptonite is. And overcome it.

I began my first book, Who’s Got You, with a story about Superman and how God helps us to be Superman in the eyes of our children.

There is the Kryptonite that pulls you away from God.

Maybe it’s neglecting your prayer life; maybe it’s hanging out with your drinking buddies who encourage you to drink too much; maybe it’s a television show you know you shouldn’t watch because of its content. This last one is worth discussing a little more.

Movies and shows can influence the way we feel about ourselves and others; they can have a profound effect upon our souls.

That being the case, what does today’s cinematic palette have in store for us? In short, impurity is the norm, blasphemy comes in barrages, and a gleeful form of sadism is the standard. Many modern movies dumb-down the viewer’s sense of innocence and decency. Putting it kindly, movies such as The Wolf of Wall Street and Fifty Shades of Grey aren’t the kind of thing you watch if innocence is your goal.

Of course, this isn’t to suggest that the problem is confined to movies; cable television is often worse. Binge-watching is the disordered order of the day, offering viewers a continual buffet of distasteful content.

It used to be that a particular show may have portrayed rampant impurity and violence for an hour a week; but now, people can watch these horrors hour after hour until they emerge having seen more violence and impurity than Caligula’s butler.

In his treatise, On Dreams, Aristotle relates that “persons become very deaf after hearing loud noises, and after smelling very strong odours their power of smelling is impaired…” No one seriously doubts the philosopher in that observation, yet when it comes to watching objectionable content, we act as though this principle no longer applies; as if loud noises affect our hearing and strong odors affect our sense of smell, yet somehow immoral content makes no impression on our souls. Aristotle also observes that if we see an image enough, we continue to see it even if we close our eyes. We need to recognize that many cinematic offerings are Kryptonite for the soul.

Superman was smart enough to avoid Kryptonite whenever he could. Why aren’t we?

There is the Kryptonite that pulls you away from your wife.

If you’ve read my writing over the past decade or so, you’re aware that I have an inordinately happy marriage, which I attribute to God in divine terms, and to my wife in human terms.

Every so often, I have a recurring dream that goes something like this. In the dream, I’ll be in a situation in which I haven’t seen Lisa in many years, and then I meet her again.

My dream always ends the same. With Lisa and I together. Happy.

Do you married men ever thank God for your wife, and for your marriage? This might sound a little odd, but I thank Lisa all the time for marrying me. Sure, I naturally wonder why she married me, but that’s a different matter altogether.

I’ve never felt worthy of her, and with the grace of God, I never will.

There’s a good goal for a married man: ask God to give you the grace to feel unworthy of your wife. What would marriages be like if all men considered themselves unworthy of their wives? Divorce lawyers would be in unemployment lines.

Sadly, I have a feeling that men often have the opposite—they believe that they are worthy; beyond that, they believe they can do better. That’s Kryptonite.

You can’t strengthen all marriages; you can only strengthen your own. Do that.

There is the Kryptonite that pulls you away from your children.

Yet, with all the possible things Superman could be doing, he somehow finds time to spend with Lois. There’s a lesson in that for us fathers.

Our children are somehow aware that there are important things that we fathers could be doing outside the home (although the children might think they are more important than they really are), so they often appreciate the time that we spend with them. They also appreciate the fact that we enjoy spending time with them—not out of paternal duty, but out of love.

We’ve been conditioned that what really matters is providing materially well for our children. We’ve been programmed to believe that we need to provide a better house, a better minivan, and better clothes for our children, not only for their sakes but for the sake of our own good standing and respect.

Yes, of course we need to provide the necessities of life—we are duty-bound to provide all the needs and some of the wants of our children. But fathers are not mere economic agents. We need to provide for them spiritually, emotionally, physically, and psychologically as well.

It’s about time. It’s about presence. It’s about the happiness that we exhibit when we are with our children. That time and presence and happiness vary with each child. But very rarely do these have anything to do with money.

We are Superman in the eyes of our children, even if we can’t afford a decent cape. That’s OK.

It’s not about the cape.