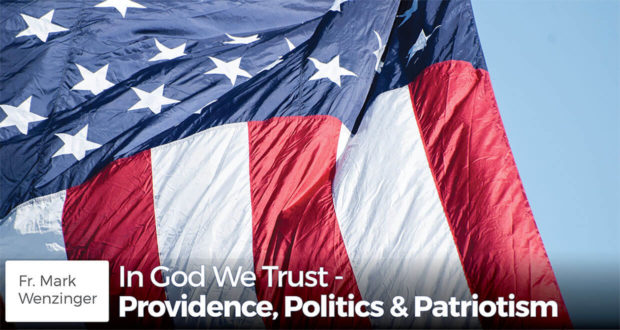 Take heart, Father Mark Wenzinger has this advice for Catholics participating in American politics when the outcome is less than desirable or distressing.

November is a difficult month for Catholics who take seriously their duty to vote and participate in the American political process.

From the standpoint of Catholic dogmatic and moral teaching, both major political parties take public stances relative to critical moral issues that are either ambiguous or else fundamentally at odds with truths of the natural law.

For us Americans who are Catholics, the question thus arises with renewed urgency as to how to participate in the American political and electoral process, especially at the national level, and even more so if the outcome of the elections is less than desirable or distressing.

I would first say in response to those who are tempted to cease playing any part in American politics, please do not give in to this temptation! Behind this is another and more fundamental temptation: to assume that things are worse now in every respect than they have ever been before.

This assumption has its origins with the Evil One, who proposes to us what is at best a half-truth in order to lure us into throwing up our hands in discouragement and defeat, a defective stance on our part, to be sure, and one that precisely serves his own malign purposes.

Of course it is the case that the current electoral processes and legislative bodies are mired in corruption, both personal and systemic.

However, such a state of affairs has almost always been the case, far more often the rule than the exception, throughout the course of human history.

Humanly speaking, everything is actually always on the verge of collapse. And frequently enough whole political communities and political orders do collapse under the weight of the corruption that permeates them.

We do well to remember that all sinful actions and attitudes carry within themselves temporal punishment, ordered mercifully by God to the restoration of the order of justice between man and God and thus ordered mercifully also to the renewal of human life both individually and communally.

It is thus always the case that we need now to be asking both personally and communally as Christ’s Body and Bride for the grace to bear our share of the hardship that the Gospel entails for the sake of the ultimate triumph of God’s Kingdom in Christ.

Doing the Best We Can

For many decades, faithful Catholics have already been making the best decisions that we can, both as Catholics and as citizens, in the context of a political order that is as inherently sinful, rebellious, and disordered as is sinful human nature itself apart from God’s grace. We are not to be surprised that such is the case, and we are not to be discouraged that such is the case.

In thus working with a profoundly flawed political system, we are not doing anything that God Himself has not deigned to do in the working out of His Providence over the whole course of salvation history. God chose Abraham to be the father of the Chosen People, through whom God would reconcile all of fallen humanity to Himself.

But Abraham and his descendants were often profoundly sinful in their dealings with one another and with God. Sacred Scripture attests, however, that God worked precisely in and through their sinfulness to accomplish the unfolding of His Providence.

The history of the Chosen People of God is, on the one hand, a vividly narrated tale of human sinfulness, cowardice, treachery, and idolatry. However, it is also the triumphant story of God’s Providence and of how God continually brings good out of the evil that originates in ourselves.

As members of Christ’s Mystical Body, we likewise can positively influence the political order in which we find ourselves, no matter how corrupt it is, even if we must suffer unjust civil punishment up to and including death in the process in order to do so.

Though there are many reasons to be pessimistic about human prospects when we consider our finitude and sinfulness, there is always much greater reason for resolute hope and courageous action when we consider the victory that God has won for us through the Cross of Christ.

Thus, in participating in the political and electoral process, we do so not as people placing our trust primarily in flawed and imperfect persons and political structures that belong to the old order of things that is passing away.

Rather we do so as people who trust in God’s goodness and omnipotence and who know that He can work precisely with and through the most unlikely of human agents and human situations in order to show all people that it is He, and not we ourselves, who is the primary cause at work in human flourishing and in the furthering of the human common good.

If we really have faith in God’s Providence and in His definitive victory over sin by means of Christ’s Death and Resurrection, neither may we fret unduly over the sinfulness of even the most corrupt of human agents, nor may we place inordinate hope and trust even in the best of them.

The final words of the Bible, uttered in light of Christ’s Paschal Victory, are these: “The Spirit and the Bride say, ‘Come’. And let him who hears say, ‘Come’. . . And He who testifies to these things says in reply, ‘Surely I am coming soon’. . . To which His Church can and must reply ‘Amen. Come, Lord Jesus’!”

This is the eucharistic and ecclesial dialog in which we are primarily to be engaged and which is to structure and enliven our actions and endeavors in the political order.

If we order our political endeavors to the hope-filled eucharistic and ecclesial vocation that is proper to us in these “latter days,” we will secure for ourselves the greatest equilibrium and peace of mind and heart, and we will be the most effective at securing the common good of mankind in both the natural and the supernatural orders.