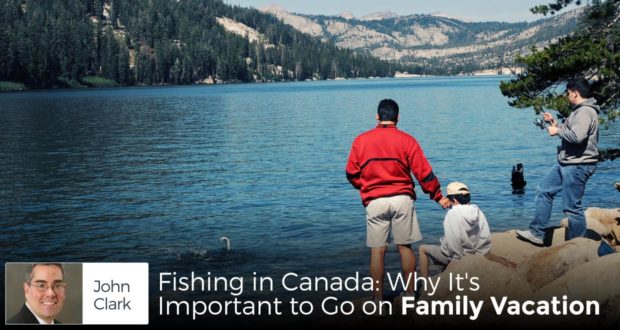 Fishing in Canada: Why It’s Important to Go on Family Vacation

When my brothers and I were growing up, our family vacations were fishing trips to Canada. In fact, we never really thought about going anywhere else. Some years we went; some years we didn’t. But if we went, Canada was where we were going.

Even before the trips, we studied about Canada, or more specifically, about its currency. Though I was later involved in the foreign currency markets as a financial professional, the first foreign currency I ever followed was the Canadian dollar. The rate of currency exchange often dictated whether my Dad could afford the vacation. If the American dollar were strong that year, that was good news for all of us.

In the years we could afford to go, my Dad drove the family station wagon. My mom always stayed home. My mother—mysteriously unattracted to the idea of driving sixteen hours to lodge in a creaky, mosquito-infested cabin perfumed by fish—stayed home for these vacations.

We measured the driving trip less in miles than in how many old time radio programs we could listen to along the way. As the Clark family raced toward the northern border of America, we were listening to cassette tapes of Burns & Allen, Fibber McGee and Molly, Suspense, and our new favorite: The CBS Radio Mystery Theater. We listened to these so many times that we could quote them verbatim, along with parodying them to each other.

We couldn’t afford hotels along the way, so we slept in the car, with at least one of us trying to stay awake with our Dad in the front passenger seat. With a loquacious Green Beret behind the wheel for sixteen hours each way, we learned about war, peace, fishing, faith, card games, music, where to stop for food, and (much more importantly) where not to stop for food. More than all this, though we only realized it years later, our father was teaching us how to be a dad.

When we finally arrived at our appointed cabin, we would unpack our bags and fishing rods and reels, and begin the task of killing the mosquitoes in our cabin. You don’t have to be near Canadian water long before you learn that Canadian mosquitoes are rough customers.

I have no idea why, but they’re mad and they’re looking for someone to take it out on. One of my brothers famously killed over 200 mosquitoes one night in our cabin.

While some of my brothers hunted mosquitoes, I never missed a chance to go with my Dad to the supermarket. I think it was then that I first discovered that if you really want to learn about the culture of a place, go to the supermarket.

In this regard, I was fascinated by how different Canada was from America. For instance, in Canada, milk was sold in bags. Non-resealing bags. In the thirty years since, I have tossed and turned at night as my mind searches for a reason why. But it searches in vain. I keep wondering: If you’re going to sell milk in bags, why stop there?

As in: “Anything I can pick up at the store, Honey?”

By shopping in Canada, I also learned a little French. Very little. At the end of my first week in Canada, I was pretty proud—nay, haughty—that I knew how to say “Cap’n Crunch” in French. For the non-Francophile reader, let me save you the trouble of frantically Googling the answer: “Capitaine Crounche.”

Since then, it has been brought to my attention that “cereal box French” is a slang term, meaning a sketchy and unreliable grasp of the French language, derived primarily from reading the French side of Canadian cereal boxes. (Years later, I found that cereal box French did little for my college grade, as my professor insistently proffered questions outside my purview of ante meridian kibble.)

Once assembled, we did what we came to do: go fishing. The main lake at which we fished was right outside our cabin. But we also sometimes packed up our gear and flew to another nearby lake. To do so, we all flew in a pontoon plane (a plane designed to land on water). This was no easy exercise, as we had to transfer our fishing gear from the plane to the boat, and back again.

The hardest part was transferring the boat motor, which weighed about sixty pounds, from the plane to boat. For that to be possible, someone else had to hold the boat firmly to the pontoon portion of the plane. Yet, apparently, this duty was not always communicated well.

On one occasion, somehow the pilot thought that my brother was doing the yeoman’s task of holding the boat firmly to the plane, which he was not. So as the pilot grabbed the engine, the boat separated from the plane, and the pilot nearly fell into the watery abyss while hanging on to the huge engine. Realizing what almost happened, the pilot responded by saying something that my whole family has quoted to each other ever since.

Now, there’s no way to do justice to his words in print, because to understand how funny they were, you would have to have seen the look on his face, along with the Canadian accent that made this understated line infinitely more memorable. He said: “Could you maybe hold the boat?”

It is said that golfing is a good walk spoiled. For me, fishing was often a good boat ride spoiled. Not that I didn’t somewhat enjoy fishing; at times, it was fun, although I was never very good at it. My Dad and my brothers had mastered the art, however.

When we fished for Pike, we used red and white metal lures called “spoons” that somehow attracted the fish. What attracted me to the lures was that I didn’t have to put a worm on the hook. One afternoon, we ran out of lures and my brother made his own lure out of a red and white Coke can, which—to the surprise of everyone except my brother, I guess—actually worked!

I had much less luck as a fisherman, but I don’t think I had any less fun. For me, the actual “fishing” part was almost incidental. At its essence, “fishing” meant sitting in a boat together with my brothers and my Dad and cracking jokes all day. And, as I mentioned, a boat ride.

I still remember the feeling of exhilaration of those boat rides at dusk, after another day of fishing. I loved to sit in the front of the boat, feeling the gusts of wind on my face, imagining myself a superhero flying across the water. In the distance, I still remember how pretty it was to see the approaching shoreline, where the tiny cabins had turned on their lights for the evening and fishermen had built little fires to cook their dinner.

When we arrived back at the cabin for the night, we would usually eat one of two meals: Hamburger Helper or fresh fish. After dinner, we would filet the fish we caught that day, prepare our rods and reels for the next day, or play card games like Hearts or Whist for hours.

These are often the things that happen when you have no television: you communicate as a family and enjoy each other’s company. You see your Dad be happy. You see brothers become brotherly.

Almost four decades later, I look back on those trips with joy. And you know something? I wish we’d never stopped going.

I understand why we stopped: life happens. We had colleges to attend, jobs to work, careers to foster, and our own families to raise. Worthwhile things, all.

But I also understand this: people grow apart. Even brothers.

And so, dear reader, my advice is that you use your vacations to grow closer as a family.

Please consider making your annual vacation with your children something you continue after they grow into adults. If you play your cards right, you might even learn a little French along the way.