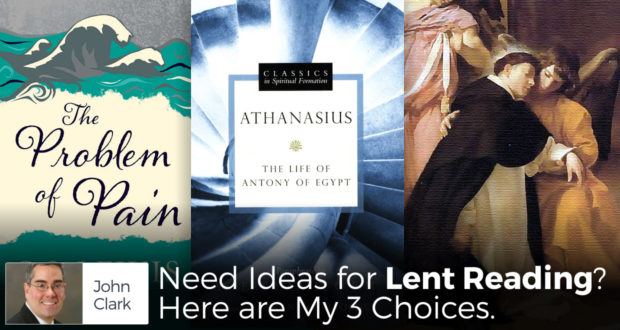 Need Ideas for Lent Reading? Here are My 3 Choices.

Though I’m guessing that Lent is one of the more unpopular ecclesiastical observances, it is important that we recognize Lent as an opportunity to grow closer to God.

It is a time for sacrifice, mortification, and resolution, but also a time for understanding.

There are things that I can know and understand that will bring me closer to God this Lent; I pray that these three sources are part of that journey. I pray that they may be for you as well.

The Problem of Pain

Though I have read many of Lewis’ works, I have never read this in its entirety. Perhaps like many other people, I am familiar with only the best-known quotes from its pages.

But my experience is that it’s nearly impossible to understand the full meaning of his works without reading every word. And if you really want to grasp the subtleties and message of Lewis, you do yourself a huge favor by reading his essays in one sitting.

For instance, last year, though I hadn’t picked up The Screwtape Letters in years, I sat down and read it in a single day, and my impression of the book was quite different than what I remembered.

Having absorbed it little by little years ago, my recollection of the book focused on the devils; but when I read it in one sitting, my focus was much different.

This time, I was focused on the man who was being tempted: his strengths and his weaknesses, his failings and his resolutions. All the while, the constant thread is a truth that even the devils know: each one of us fallen humans is created for greatness, love, and an unwavering happiness that only Heaven can provide.

These are certainly themes that Lewis addresses in the Problem of Pain. Arguing against the idea of a utopia, Lewis writes:

Hungry men seek food and sick men healing none the less because they know that after the meal or the cure the ordinary ups and downs of life still await them. I am not, of course, discussing whether very drastic changes in our social system are, or are not, desirable; I am only reminding the reader that a particular medicine is not to be mistaken for the elixir of life. C.S. Lewis, The Problem of Pain, (New York: HarperCollins, 2009), p. 115, Kindle.

I’m confident that there is much in here that will help me discover a greater meaning to suffering and happiness this Lent.

This seems like a terribly obvious thing to read during Lent. Here you have a biography about the founder of Christian monasticism (Saint Antony), written by a Doctor of the Church (Saint Athanasius).

“For we wrestle not against flesh and blood, but against principalities, against powers, against the rulers of the darkness of this world, against spiritual wickedness in high places.”

St. Antony’s life is a reminder of that truth, as he repeatedly and victoriously stood strong against the dark forces of Hell for the amazing one-hundred-and-five years of his life. During one such incident of being attacked by devils, St. Antony responded to them:

If there had been any power in you, it would have sufficed had one of you come, but since the Lord has made you weak, you attempt to terrify me by numbers: and a proof of your weakness is that you take the shapes of brute beasts.

Nor was the Lord then forgetful of Antony’s wrestling, but was at hand to help him. So looking up he saw the roof as it were opened, and a ray of light descending to him. The demons suddenly vanished, the pain of his body straightway ceased, and the building was again whole. But Antony feeling the help, and getting his breath again, and being freed from pain, besought the vision which had appeared to him, saying, ‘Where were thou? Why did you not appear at the beginning to make my pains to cease?’ And a voice came to him, ‘Antony, I was here, but I waited to see your fight; wherefore since you have endured, and hast not been worsted, I will ever be a succour to you, and will make your name known everywhere.

St. Antony, please pray for us this Lent, and always.

On “Temperance” and “Fasting”

Some people view Lent as a forty-day denial of goods; and in some sense, it is. But St. Thomas Aquinas offers a more complete view.

In classic scholastic fashion, Thomas begins his treatise on temperance by stating the objections to temperance, which he will later address.

The first objection goes like this: temperance cannot be a virtue, because it pulls us away from “pleasures to which nature inclines.”

Nature inclines everything to whatever is becoming to it. Wherefore man naturally desires pleasures that are becoming to him. Since, however, man as such is a rational being, it follows that those pleasures are becoming to man which are in accordance with reason. From such pleasures temperance does not withdraw him, but from those which are contrary to reason. Wherefore it is clear that temperance is not contrary to the inclination of human nature, but is in accord with it.

As Thomas explains, temperance does not deny man’s nature; temperance affirms it. Not a bad lesson for Lent.

In the section on fasting (though he explains that not all people can or should practice fasting), Thomas speaks of a three-fold benefit to fasting:

Perhaps as we go forward in Lent, we can read some of Thomas’ thoughts on these subjects.