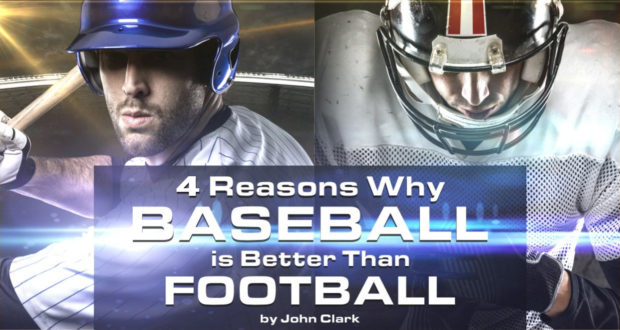 4 Reasons Why Baseball is Better Than Football

A few weeks ago, baseball passed the sports baton to football. And so, at about this time every year, I start to become a little sad.

Others look at the calendar to know whether it is still summer; I look at the baseball fields. But as the sun has set on the last game of the year, I thought it was time to share my thoughts as to why baseball is better than football.

I understand that sports fans everywhere will be unmoved. For the lover of football, nothing I am about to say will strike you as convincing. I write this instead for posterity.

1. Baseball is a game that is designed for warm, sunny weather.

When we were first married, Lisa took me to a football game in Cleveland, Ohio under the guise of a birthday gift. (Despite this, our marriage survived.) Several painful notches beneath cold, it was downright cryogenic. With an unmerciful wind that blew in from Lake Erie, it made the North Pole feel like Nassau.

In the most brutal physical profession of the post hoc ergo propter hoc fallacy that I have ever witnessed, the guys in front of us took off their shirts in the hope that their team would score. (They didn’t.)

One final observation about that day: when your team loses in December and the last ten seconds tick off the clock, it feels as though the countdown refers less to the time than it does to the temperature.

Football’s preseason is almost unwatchable, even for diehard football fans. In some notable cases, veteran players refuse to play at all for risk of injury. Not that I blame them, but that leaves the viewers to root for many players they’ve never heard of.

The only person who wins in that scenario is the nacho vendor in the bowels of the football stadium.

For you married men, try this exercise. Your wife wants to drag you to a birthday party for her cousin on the same night that your team has a preseason game. Do you want your best defense to be that you need to “check out your team’s backup punter” to see if he can make the squad? Good luck. Even you aren’t buying that one.

Contrast this with baseball.

About ten years ago, after a particularly dark and miserable winter, I called my wife and asked her to get the kids in the car. She asked why. I told her that we needed to go to Florida for spring training. Right away.

That was the antidote that we all needed. It’s warm and sunny. You get to meet players. Tickets are cheap. With stadium capacities of maybe six or seven thousand, there are no bad seats. It’s been said that preseason baseball is better than most sports’ regular season. Did I mention it’s warm?

Every year, football graces us with its final game. But with every passing year, the event seems to become less about the actual game itself. It is a corporate event, at which business is transacted; it is the nineteenth hole of the football world for the fabled 1%.

The other 99% of us endure football parties, which are about anything other than football. I’ve been to a few, but the game itself is often an afterthought. It’s about beer, snacks, games for the kids, and gossip about the neighbors.

A number of people look forward more to the commercials than the game. In fact, there is probably more talk about the ads the following day than the game. Say what you want about the baseball, but I’ve yet to hear this comment: “Did you see that great ad between innings last night?”

4. Baseball is more hopeful than football.

Until the last out is recorded, your team still has a chance. Not so with football. Once your team is up by three touchdowns in the fourth quarter, you get to look forward to a steady diet of running plays (often by backup running backs).

By then, most people are flipping back and forth between that and M*A*S*H reruns.

Once again, thank you for letting me get that off my chest. I appreciate it. It’s going to be a long winter.