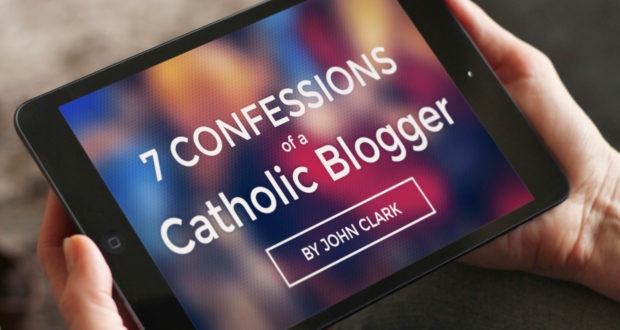 I have written a few serious columns lately, and as my faithful readers (OK, “reader,” singular) know, I am not a very serious person.

So I thought it might be time to step back and observe my craft—to “sharpen the saw” as Stephen Covey might say.

In that spirit, it’s time to make some observations/confessions about blogging; specifically, Catholic blogging.

I don’t want to speak for Catholic bloggers everywhere, but then again, I’m not going to lie awake at night worried about it either (I will lie awake nights worried—just not about that.). Here goes.

Me? I try to take time for sufficient reflection before writing. It may not show up in my blogs, but it does make for a more meaningful Confession.

Nothing. Fellow bloggers often couldn’t care less what I write, or how well I just explained some difficult concept of the Faith. These are irrelevancies. They ask only one question: “How many clicks do you get?”

For the woefully (yet, undoubtedly happier) uninitiated, a “click” equals a view. It’s a measure of the number of people who have seen your column. “Clicks” are the currency of blogging, and a completely irrational (yet insistent) basis of self-worth for bloggers.

Keep in mind, no one pays to read our blogs. In fact, though there are companies that make millions of dollars a year by blocking blogs like ours, we congratulate ourselves nevertheless. In the blogosphere, there is a competition for clicks. There is also a competition for “likes,” “tweets,” “pins” and “shares.”

I don’t even know what some of these things are, but I know I want them. Pope Saint John Paul II might have referred to this as “electronic consumerism.”

4) My real friends are my online friends.

Throughout human history, the saints, poets, and philosophers have had a difficult time defining the concept of friendship. The notion of friendship is so touching, so loving, so moving, that artists have found it hard to express this idea in words. Bloggers don’t find it hard at all.

A friend is someone who “likes” or re-tweets your blog.

End of sentence. End of paragraph.

As far as social media is concerned, I’d rather be “liked” than loved. The first time I wrote a blog that received 100 “likes,” I inadvertently broke into an audible rendition of Sally Field’s famous Academy Awards acceptance speech. At the library.

Call that pathetic if you want, but that’s more people than like me in real life.

I’d rather be referred to by a more flattering word, like “idiot.” Shakespeare once wrote that the names of things don’t matter much, commenting: “a rose by any other name would smell as sweet.” Nonsense.

First of all, “blogger” sounds like a bad word. It even looks like a bad word on paper. Calling someone a “blogger” sounds more like pejorative than praise. What if you were giving a speech, and you were introduced with the following words: “Ladies and gentlemen, I’m pleased to introduce you to the world’s greatest blogger.” That would draw more laughter than applause.

If you tell someone you are a blogger, their words might say: “Oh, that’s great.” But behind the words, I know they are thinking: “Just keep at it. Someday you will find meaningful work.”

Some bloggers issue daily blogs; I have no idea how they do it. I do a weekly blog, but I have found that even that can be challenging.

As I once tried to explain to my freshman English teacher: even bad writing takes time.

But judging by the crud on the blogosphere, I think this makes me unique.

It’s been estimated that there are over one billion blogs, and I doubt many of them are edited. This might sound phony, but I like to see red marks on my rough drafts. I look at corrections as just that: corrections.

Some of the editors I have used in the past are better than others. Some hand my rough drafts back and say: “I liked it,” (and not in the meaningful way of internet “liking”) with no marks on the paper. That doesn’t help me.

What I’m really looking for is the editor who is not only emotionless, but slightly cruel—the one who says:

If I find that guy, I’d have to consider hiring him.