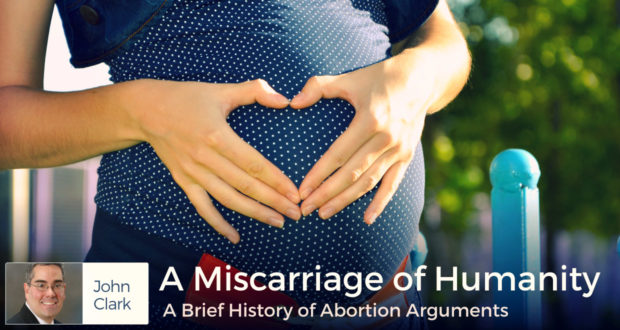 A Miscarriage of Humanity: A Brief History of Abortion Arguments

Now that new pro-abortion arguments are coming into vogue, I thought it was time to look back at some of the arguments of yesteryear before addressing those of today.

In the early 1970’s, abortion advocates asked: How could you assign the word “human” to a blob of tissue that has no recognizable human parts like a heart, lungs, or liver?

Though that question was intended as a mocking rhetorical one, technology was providing an answer. With equipment that was advanced in the late 1950’s (though not commonly used in American hospitals until the late 1970’s), obstetric ultrasound scanners were producing images of recognizable human babies developing inside their mothers.

As the writers of Imaging and Imagining the Fetus: The Development of Obstetric Ultrasound wrote:

“Fifty years ago, the unborn human being was hidden, enveloped within the female abdomen, away from medical gaze. The fetus made its presence known largely by its effects on the pregnant woman’s body…Imaged by the ultrasound scanner, the developing human being became, for the first time in its history, a clinical entity, a patient in its own right…. What is more, the fetus has acquired a public presence, a social identity. It now features in family photograph albums, pictured apparently as casually as a toddler on the beach.”

If a goal of society is to protect innocent life, the advent of obstetric ultrasound should have ended the abortion debate in America.

It only changed the argument.

With the “blob of tissue” argument proven visually false, abortion promoters shifted gears. This doctor argument had been around for decades, but it picked up steam in the 1980’s. The argument was that no one—not other doctors, not lawmakers, not even an adolescent’s own mother—should interfere with the abortion decision that a woman and doctor make together behind closed doors.

But this prompts a few questions.

First, since this “closed-doors” argument presumes the unshakable ethics of abortion doctors, what other profession in America is granted this sort of pass? Nearly every profession in America has laws, regulations, and/or codes of ethics associated with those professions. These laws, legislative bodies, and ethical boards constitute what could be termed third-parties.

The answer to that question is really interesting. In the 1980’s, there were laws, regulations, and codes of ethics for healthcare professionals and the medicine they practiced. However, abortion regulations (especially in the first three months) were almost entirely non-existent.

Why? Because as attorney Clark D. Forsythe explains in Abuse of Discretion: The Inside Story of Roe v. Wade, it was difficult to determine if abortion regulations were even Constitutionally allowable after the Roe decision.

Forsythe writes: “It took nearly twenty years—until the Court’s Planned Parenthood v. Casey decision in 1992—for the Justices to clarify that some regulations were permissible.”

Between 1973 and 1992, an American woman could often have expected more regulatory and ethical oversight for a teeth cleaning than for an abortion. In practice, this sometimes remains the case. That “abortion is just something between a woman and her doctor” loses some of its rhetorical luster when one considers that her doctor may have been Kermit Gosnell.

As it turned out, there is a certain perverse truth to the doctor argument. In the absence of meaningful regulation, abortion often has been something only between a woman and a doctor, but why that was ever an argument in abortion’s favor is bizarre.

1990’s – 2010’s: “Any and every regulation of abortion will bring about the complete elimination of women’s rights.”

The argument was made that if any abortion regulations were enacted, it would eventually lead to the rejection of all women’s rights.

(Somewhat ironically, as the following video illustrates, some used the actual term of the fallacy “slippery slope” to defend their position.)

“Sure,” the argument went, “Partial-birth abortion might be grisly and ghastly, but that’s the price that must be paid to ensure the rights of women.”

Whether or not abortion involved taking a human life became incidental.

By the year 2000, it was eminently more reasonable to doubt satellite pictures of the earth than it was to doubt the high definition 4D videos of prenatal babies. And when you see images of someone smiling and playfully sucking her thumb, it can disrupt your pro-abortion arguments.

Therefore, rather than a new argument, pro-abortion groups countered with an accusation: “You’re against abortion? You must be part of the war on women.”

Thus, “war on women” was the trump card in a new rhetorical game to be played across America. Hats off to the folks who coined the term. For the past 25 years it has proven to be perhaps the most effective ad hominem fallacy in history.

By this fallacy, to be pro-life, or even to being in favor of a single abortion regulation, equaled hating women; ironically, including those girls who are aborted.

Again, whether or not abortion involved taking a human life was incidental to the argument.

In a sense, abortion arguments have come to term. Rather than the 1970s “blob of tissue” argument, the argument now is that aborted babies are specifically not just blobs of tissue. The argument is that since these babies have skulls, livers, and hearts, it would be wrong not to use organs from aborted babies to potentially save lives. Ironically, baby girls are being aborted, dissected, packaged, and shipped off to medical research labs so that men might, potentially, live.

And if you have a problem with that, you are part of the war on women.

For the record, the pro-life argument has remained essentially unchanged since the time of the Ancients. The advantage of making logical arguments based on principle is that you don’t have to change your arguments. And our principle yesterday, today, and tomorrow is this: the deliberate taking of an innocent human life is wrong.