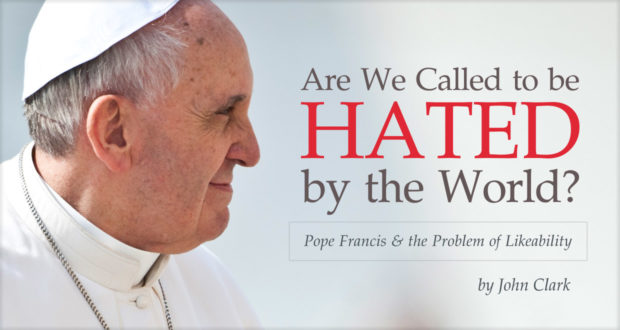 Are We Called to be Hated by the World? Pope Francis & the Problem of Likeability

Since the first moments of his papacy, Pope Francis has been criticized by some Catholics for being liked by the world. Admittedly, he seems to be liked in venues not traditionally affectionate toward Catholicism, such as GQ, Time Magazine, and Elton John concerts.

This likeability makes some Catholics feel uncomfortable, perhaps mortified that the rock of Peter would be liked by Rolling Stone Magazine. Some center on Our Lord’s words of John 15:18: “If the world hates you, know that it has hated me before it hated you.”

Let’s begin with another question: Was Jesus liked? For an answer, we can observe that both Scriptural and non-Scriptural history records the existence of a massive number of followers of Jesus. The Gospels repeatedly speak of a “great multitude” following Him. Consider the miracle of the loaves and fishes, at which 5,000 men—not counting women and children—were present to meet with Jesus. Considering the overall population, that number is striking.

The Gospels (Mark 3:9-10) mention that large crowds often had to be held back from approaching Jesus. Jesus was rejected in Nazareth and hated by the Pharisees, but the view that Jesus was commonly disliked is distorted.

If Jesus was liked by many on Earth, then, what is the message of Jesus in the above Johannine quote? St. Augustine provides us with a possible answer. St. Augustine wrote that there are those people who love themselves in such a disordered way that they hold God in contempt. Augustine viewed that these people are members of what he called an “Earthly city.”

Jesus is teaching us that the members of this Earthly city might hate us, because they hated Him first. But Jesus did not mean that everyone in the world hated Him, or would hate us.

Hated for It’s Own Sake?

Moreoever, Jesus did not mean that we should seek to be hated for its own sake. We cannot desire for other people to commit a sin, whether it be lust, envy, or hate. We can accept the hatred of others for the sake of loving God, but we can never hope to be hated. On a practical level, if we Christians are hated, few people will be moved to Christianity through us. That’s a pretty simple calculus.

In short, Christians are not necessarily doing something wrong if they are not personally hated by the world. They will “know that we are Christians by our love” toward others, not necessarily by the absence of others’ love toward us.

Of course, he is not the first to focus on compassion. St. Anthony, St. Nicholas, St. Therese of Lisieux, and a great litany of saints have exemplified compassion, and were liked for it. When they practiced compassion, they were following Jesus, Who had compassion on the blind, the sick, the outcast, the sinner, the leper, the hungry, and the poor.

Sometimes some of us Catholics have forgotten the role of compassion in our Faith. Pope Francis is reminding us. If he is liked for it, we should not view that affection as an indictment; we fellow Catholics should be happy about that.

We should also appreciate the effect that a likeable pope can have on the world. Coming to the Faith happens in myriad ways: a friendship with a Catholic, a simple conversation, reading a biography, and countless other paths. The history of conversion evidences that many roads lead to Rome.