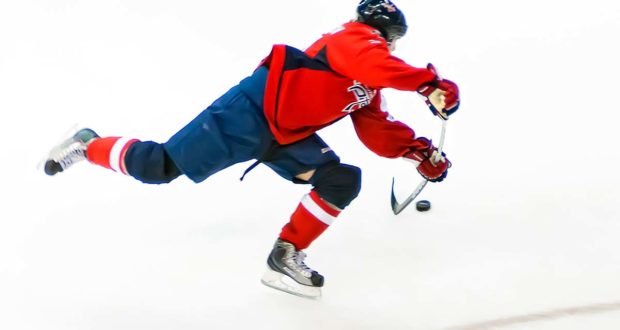 Thanks to some good friends generously giving us tickets and inviting us to go along with them, Veronica and I recently went to see an NHL hockey game. I have four alpha-male boys, yet somehow it is my daughter Veronica, the possessor of impeccable cosmetology talents, who is the biggest hockey fan among my kids.

We sat just a few rows up from the ice, almost directly behind the net. You can learn a lot about the game from that viewpoint. For those of you who are not “into” the sport, let me assure you: it is physically brutal—these guys aren’t missing teeth because of bad dentistry. The amount of endurance hockey takes is staggering. Next time you watch a match, forget about the game they’re playing, and just watch the skating. Skating forwards and backwards in full gear for twenty minutes at a time takes vigorous dexterity. Then throw in the sliding on the ice, being slammed into the glass by opponents on skates traveling awfully fast, and getting tripped by opponents at full speed. At some point, you almost begin to question the very sanity of the players, and wonder if they understand that what they’re doing is crazy.

At hockey games, the fans all stand and cheer when their player scores, but I was most impressed with the goalie, because his job must be the hardest. I read somewhere that if you show up at a pick-up hockey game, and volunteer to be the goalie, people appreciate you. That may be due to the fact that hockey sticks flying near your head all night and frozen pucks coming at your face at speeds of 120 miles per hour is not most people’s idea of amusement. And it’s not terribly forgiving. Jacques Plante, who played goalie professionally for almost 30 years, once said, “How would you like a job where, every time you make a mistake, a big red light goes on and 18,000 people boo?”

Thousands of us sat and watched the goalie heroically stop shot after shot at the net, stopping some shots with his chest, some with his glove, some with his legs, seemingly impervious to the pain and exertion that each “save” physically cost him. Though his shoulders and quadriceps must have been begging him to rest, he stood firm. And the closer the opponents skated to the goal, the more intense his concentration must have become. The viewer got a sense that the goalie’s mind and body were working together and striking a defiant tone, almost telling the opponent, “There’s no chance you’re getting anything in my net tonight. Not while I’m here. No way!”

At some point in the second period, I began to see the similarity between a goalie and fathers. While the goalie has a net that he must protect, we have a family. Good fathers stand and protect against the things that would assail their families, such as the drugs, pornography, materialism, and atheism that are so prevalent in the world today. On the other hand, seemingly unaware that there is even a game to be played, many fathers today leave the net unguarded, and then wonder why their families break down.

Herb Brooks, the coach of the 1980 U.S. Olympic hockey team, once told his players, “If you give 99 percent, you will make my job very easy.” Whether he realized it at the time, Brooks was giving a life lesson to his players— that there’s a big difference in life between giving all you have and almost all you have. And it makes you wonder if there is someone thinking that right now about us fathers: “Give 99%, and you’ll make my job very easy.” The good news is that if you give 100%—if you love God with all your heart, all your soul, all your mind, and all your strength, it makes the work of evil almost impossible. And part of this 100% is looking over and realizing that your coach is God, Who has given you all the tools you need for the strength of a father.

In the most important game Brooks ever coached—in fact, the most famous hockey game ever played—a group of amateur American boys took on the best Soviet hockey team ever assembled, and won. At the end of the game, the announcer, Al Michaels, famously asked a question which is remembered to this day. It was a very simple question: “Do you believe in miracles?”

We need to live a life of believing in miracles. We need to believe that God can take us unworthy servants—faults and all—and mold us into fathers who can raise saints, and become saints ourselves in the process.

Jacques Plante was right about the booing. But I hope he understood two other things: first, that a “save” is properly named and second, that when he made them, there were a lot of cheers. In his case, it was only some fans cheering about a game played on ice. But in your case, when you make saves for your family, the choirs of Heaven are cheering. Loudly.