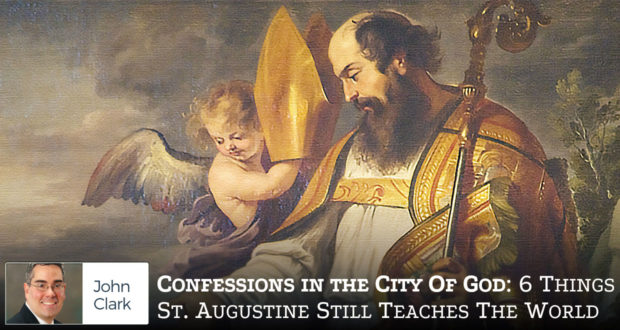 Confessions In The City Of God: 6 Things Saint Augustine Still Teaches The World

Since today is his feast day, it seems appropriate to take a glimpse at the wisdom of Saint Augustine.

Though he gave us a great wealth of theological insights, below are several that seem to particularly apply to our world today.

1. Restless Till They Rest in You

“You move us to delight in praising You; for You have formed us for Yourself, and our hearts are restless till they find rest in You.” (Confessions)

In our world, restlessness often takes tangible form, and is evidenced by the world around us. We see it in baronial houses and luxury cars, in monstrous televisions and perpetually-upgraded cell phones, in absurdly-priced meals and first-class everything.

As someone once observed, “Money never sleeps.” It’s true. Consumerism is a cruel mistress, and she never lets you rest.

But there is One Who will lead you by still waters, makes you lie in green pastures, and restores your soul. And as Augustine observes, there’s no rest until we rest in Him and with Him.

No doubt, Saint Augustine presents one of the greatest turnaround stories in ecclesiastical history. And we can believe that there will be others; indeed, some of us will be the others.

But some of us attempt to be the turnaround story “one day.” We rely on the ever-distant “one day” that we will turn around our lives. We wait to be the great Dismas, but we grow increasingly dismal in the waiting.

Augustine expresses a deep sorrow for the lateness of his conversion. Augustine understood that loving early is far better than loving late. Let’s learn from Augustine: if our goal in life is intimacy with God, what are we waiting for?

“I may add that, since divine truth and scripture clearly teach us that God, the Creator of all things, is Wisdom, a true philosopher will be a lover of God. That does not mean that all who answer to the name are really in love with genuine wisdom, for it is one thing to be and another to be called a philosopher.” (The City of God)

As Augustine observes, the term “philosopher” is awarded far too easily and inappropriately. One could only wonder what Augustine would say of the past century or so—a time in which persons like Bertrand Russell, Simone de Beauvoir, and Jean-Paul Sartre achieved the title of “philosopher,” while many philosophy students graduated without ever hearing the names Deitrich von Hildebrand or Edith Stein.

As a homage to Augustine, let’s go back and read some philosophers who truly loved wisdom.

“So it falls out that in this world, in evil days like these, the Church walks onward like a wayfarer stricken by the world’s hostility, but comforted by the mercy of God. Nor does this state of affairs date only from the days of Christ’s and His Apostles’ presence on earth. It was never any different from the days when the first just man, Abel, was slain by his ungodly brother. So shall it be until this world is no more.” (The City of God)

In a passage that serves as both historical observation and prediction, Augustine notes that the constant companion of Christianity has been oppression. In that regard, times do not change. But then, neither does the source of our consolation: the mercy of God. And if we often do not feel at home here, it serves as a reminder that our ultimate home is in Heaven.

“And men go forth to wonder at the heights of mountains, the huge waves of the sea, the broad flow of the rivers, the extent of the ocean, and the courses of the stars, and omit to wonder at themselves…” (Confessions)

In Augustine’s time, men often wondered and marveled at the created world, yet failed to do so about the mystery of their created selves. Today, by frantically arguing in favor of unintelligent design and rationalism, men have largely lost the sense of meaningful wonder.

May God give us the grace to restore that sense of wonder at all those things He has created, but especially ourselves and the roles we are all meant to play.

“Whoever, then, thinks that he understands the Holy Scriptures, or any part of them, but puts such an interpretation upon them as does not tend to build up this twofold love of God and our neighbor, does not yet understand them as he ought.” (On Christian Doctrine)

The two “Great Commandments” that Jesus gave us were to love God and to love our neighbor. Sometimes we Christians forget the second commandment, and thus, forget the first. These commandments rise and fall together. If we are not evangelizing others, or helping others to do so, we are not living the Gospel. If we are not using every day as a new and fresh chance to spread the Good News, then who will?

Saint Augustine, patron saint of theologians, pray for us.