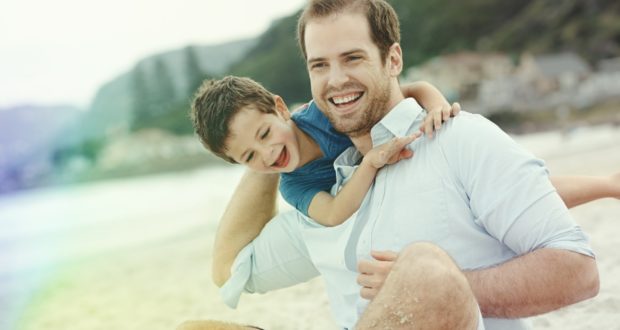 Fathers, Children, and the Mercy of the Fourth Commandment

Of course, the irony is that his father changed little—it was the son who really changed. Whoever actually made this observation, he was speaking for many of those who slowly, and often reluctantly, realize the wisdom of their fathers. And the recognition of fatherly wisdom is often the starting point of our real maturity. Sadly, many children never get to Twain’s magical age of 21—allegorically the time in which they see the wisdom of their fathers.

When some parents think back to the time they were 18 or so, they may have thought that they had it all pretty much figured out. Sure, they had parents, but they were smarter than their parents were. Their parents just didn’t “get it.” This is a pity, made worse by the fact that they often turn toward their peers for bad advice.

It’s peculiar how often teenagers reject the insight of the only man who is ever given the sacramental grace to raise and protect them, yet they desperately seek counsel from their adolescent contemporaries. Maybe the great majority of us seek such juvenile “guidance” growing up, but that doesn’t make it any less bizarre. Some seem to have an insistent temptation that father, in fact, does not know best. You could refer to this as pride, but there is a reckless hubris in thinking that you have it all “figured out.”

At some point—hopefully—you grow up and realize that you have very little figured out, so you turn to God. And you discover something that you haven’t wanted to admit: your parents did “get it.” The person who didn’t get it…was you.

Sadly, this is an altogether familiar story, yet it seems to happen to the best of people, over and over and over.

It’s sad that it takes so long for some of us to recognize fatherly wisdom. Actually, it goes well beyond “sad.” Many fathers go through an agonizing epoch of their lives, in which words that would honor them are never spoken by their children. Many fathers die un-honored by their own children. That’s a heartbreaking tragedy for the father—but it’s worse for the child.

Scripture offers harsh rebukes of those who do not honor their fathers. The Book of Sirach states: “Whoever forsakes his father is like a blasphemer…” Yet, as the Catechism of the Catholic Church reminds us, the fourth commandment is the first one that comes with a promise: “Honor your father and mother, that it may be well with you and that you may live long on the earth.” Teenagers rarely view it is this way, but it is clear that the fourth commandment is a mercy of God, forever bonding parents and children to each other.

To you teenagers, let me assure you that although you may not understand this yet, the fourth commandment is among the greatest mercies you will ever know. In your father, God has given you the human equivalent of a guardian angel. I had one growing up. By the love of God, I still do. As I get older, my Dad keeps looking out for me. By the mercy of God, as he gets older, I sometimes have the honor of looking out for him.

And if you can tell me what I did to deserve my Dad, please let me know. Maybe it’s time we all ask ourselves that same question, and honor our fathers.