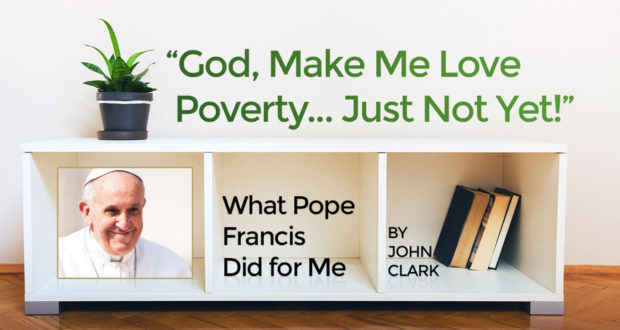 “God, Make Me Love Poverty… Just Not Yet!” – What Pope Francis Did for Me

Over the years, my column has tackled many subjects, but the underlying theme has been the defense of fatherhood. Within that purview, I have written two columns lately about the Holy Father, Pope Francis. I cannot decipher the liturgical and doctrinal issues that the mention of his name seems to produce.

I am not an expert on canon law or bishoprics or cardinals, and so I will leave these matters to respected theologians. The following reflection is not meant to be theological, at least in any systematic sense. It is merely an observation about what Pope Francis did for me.

Working in the financial field for many years, my concentration was on money. I traveled around the country speaking about the goods of the free market, and I wrote articles defending capitalism. (By the way, I don’t regret that; I think capitalism is great. What I do regret is my own failing to develop a sense of detachment. That’s not capitalism’s fault. It’s mine.)

I wasn’t exactly Ebenezer Scrooge, but when I wrote out my list of daily tasks, “foster the spirit of poverty” was not on the list. Worse, I didn’t teach the virtue of poverty to my children in a very meaningful way. I regret that. I didn’t buy into not buying.

Last year, I read something that changed me, or at least began to change me. It was called Evangelii Gaudium. It was Pope Francis’ first apostolic letter.

As I read it, for the first time in my life, I began to understand the beauty of poverty. Now, you might be thinking: “What about the words of the saints, imploring us to practice poverty? What about all the beautiful writings of St. Francis, St. Clare, and all the other saints who wrote about poverty? Why didn’t those writings change you?”

You would be right in asking those questions. I have asked myself those same questions in the past year. I don’t have that answer. I should have seen the good in poverty long before my forty-third birthday. But whatever the cause of my spiritual myopia, Evangelii Gaudium healed my vision. Pope Francis challenged me to see the joy in the virtue of poverty. For whatever reason, I got a glimpse of it, and it looked wondrous.

And it isn’t just his Apostolic Letter—it’s the way he lives his life. His multi-faceted embrace of the poor, the sick, and the downtrodden has been powerful. His actions have inspired me to strive for the virtue of poverty. It’s not always easy.

For the first time in years, I have begun going to daily Mass. I have found that the spirit of poverty and daily Mass are closely linked. That came as a surprise.

This is not meant to be an essay that highlights my virtue; believe me, the memory of my sins would strike me with terror without the knowledge of God’s mercy. But it is meant to highlight, in a tangible way, how Pope Francis helped steer the ship of my soul. Plus, I’m not there yet. We’re never “there yet.” There is much work to do on my part, like reading, praying, listening, and observing Pope Francis’ affection for the poor.

Poverty is a difficult road to travel in America, because that passage is littered with stoplights, and adorned with pretty gadgets, big houses, and other cool stuff. It’s a narrow path; the pavement of poverty has sidewalks of gold, and we are often tempted to veer off course. Peripheral vision entices, but the focus must always be on the destination.

Patience is essential, and our question must not be whether we have arrived, but whether we are still traveling. Conversion is the journey of a lifetime; you don’t go from being materialistic to being St. Francis of Assisi in a day. But for me, this journey is exciting.

It’s the opening sentence in a story that Pope Francis helped write. That’s what he did for me.