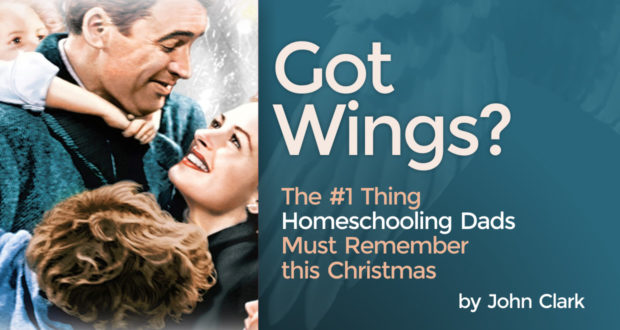 Got Wings? The #1 Thing Homeschooling Dads Must Remember this Christmas

To give John some well-deserved R&R this Christmas, we asked him to pick his favorite, homeschooling dads’, Christmas-theme column. This piece was originally titled ‘Its a Wonderful Life’, and published on December 2010.

It seems no Christmas season is complete without a family viewing of the Frank Capra classic It’s a Wonderful Life. But maybe we’ve never really considered the implications it has for us homeschooling fathers.

Most of us know the story. It revolves around a man named George Bailey who spends his childhood dreaming of traveling the world and doing important things. Due to family circumstances, he is forced to remain in the little town of Bedford Falls and operate the family Savings and Loan business.

As the years go by, George sees his friends go live the dreams that he once had for himself. George finds that his life is devoted to the Savings and Loan, not because he loves the business, but because he sees the good that can be accomplished for others with it.

However, one Christmas Eve, when money is missing from the Savings and Loan, George is tempted to despair, commenting that things might have been better if he had never been born. George finds himself tearfully praying and asking God for help. God answers his prayer and sends him a guardian angel to show him what his life would have been like if he had never been born.

In the course of this exercise, the angel shows George that many of the little things that he had done in his life made a profound difference; in fact, some of them changed the world. In the end, George realizes that he really did live a wonderful life, and his angel presents him with a message that reads: “No one is a failure who has friends.”

What would life have been like if you hadn’t homeschooled all these years? Unlike in the movie, it’s hard to know what would have happened under different circumstances. But whether your desire to home school was born from the motive to protect your children from harmful influences or to simply give them a better education, it was love that motivated your decision.

The homeschooling father’s life consists of acts that many people would consider insignificant: deciding to start a family and raise children instead of going off to pursue more worldly aspirations; choosing to enroll your children in an expensive violin or piano class instead of spending the money on a new car that might impress your friends; turning off an exciting football game at halftime on a Saturday afternoon in order to take your children to Confession instead; teaching your toddlers to say the Rosary. But whereas George needed to be shown that his life mattered, we need faith to know that these things matter.

George was determined to focus on his failings. The devils tempt us fathers to do that. They want to re-direct us from good works to worry about our failings and past sins. They want us to grow in fear rather than trusting in the mercy of Jesus.

It’s easy to focus on the negative: our kids are behind in math, our wives are overworked, we feel like we just aren’t qualified to teach science or chemistry as well as the local school teachers. We fathers are tempted to say to ourselves: “Maybe my kids would be better off if I had never home schooled them at all.”

In order to overcome these doubts, we must have faith. And we must remember that our Faith teaches us that all these things matter. Last week, I was feeling a little depressed about something, and a father called and told me how much my articles meant to him. Let me assure you: that mattered.

Last night, my son Bonaventure was up with a cough which meant that Lisa and I got very little sleep. So this morning, I overslept and had to run out of the house without eating breakfast to get to work on time. My wife arrived an hour later at my office and brought me a blueberry waffle and a cup of coffee. That mattered.

There have been times when you, as a father, were tired from the events of the day. You considered not saying the Rosary that day because everyone was so exhausted. But you said it anyway. That mattered. It mattered to you and your family; it mattered to me and my family; and it mattered to the world. The rest of the world may not recognize it for a very long time, but it mattered.

In the great plan that God has for us, everything matters. Your decision to be a father, and your decision to homeschool, has caused a profound change for good in the world. Though I don’t have my wings yet, let me assure you: it’s been a wonderful life.