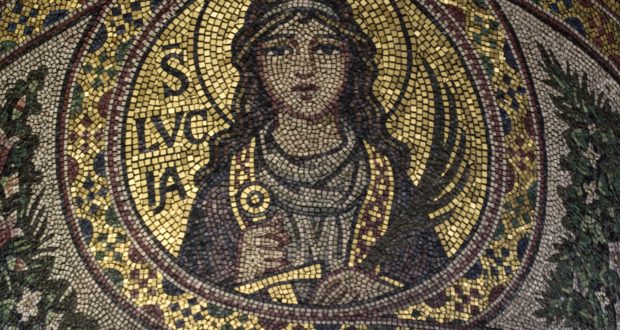 Most Catholics are aware that the Church places a special designation to virgins and martyrs among the saints. For instance, if you look at the “saint for the day” on a Catholic calendar, you may see a name listed like this: “St. Lucy, virgin and martyr.” Among theologians, it is commonly opined that these two classes of saints achieve a special “crown” in heaven. Many saints have both attributions, and there are many beautiful and inspirational stories about the saints and how they achieved these victories.

One saint, for instance, revealed that when he was a young boy, he was very determined and concerned about choosing the correct path in life that God had ordained for him. One night, in answer to his prayer, the Blessed Mother appeared to him and held out two crowns—a white crown that represented virginity, and a red crown that represented martyrdom. Our Lady asked him which crown he desired. The boy responded that he chose both. Years later, at Auschwitz, when one of his fellow prisoners was chosen by the Nazis to be executed, the boy, who had grown up to become a Franciscan priest, stepped forward and asked to die in the place of the man.

Almost two weeks later, when the Nazis administered a lethal injection to him, the promise was fulfilled. This man, known to the Nazis as Prisoner Number 16670, is now known to heaven and earth as St. Maximilian Kolbe.

Under normal circumstances, most fathers are called neither to a life of virginity nor one of martyrdom. Surely, we are called to a life of sanctity and holiness, but these white and red crowns are not to be ours. I’ve thought a lot about this “crowns” idea during my life. And though I’m not worthy to have a place in heaven at all (although I have confidence in the mercy of Jesus that I will have a place), I’ve wondered what I can offer Jesus.

Then, last week, as I was doing research for a speech, I came upon a section of St. Thomas Aquinas’ Summa Theologica that I never had read before. Thomas, the Angelic Doctor, argued that there is a third crown, writing:

Just as by virginity and martyrdom a person wins a most perfect victory over the flesh and the world, so is a most perfect victory gained over the devil, when a person not only refuses to yield to the devil’s assaults, but also drives him out, not from himself alone, but from others also. Now this is done by preaching and teaching: wherefore an aureole is due to preaching and teaching, even as to virginity and martyrdom.

Thomas makes the argument that a crown (aureole is translated roughly to English as “halo”) can be awarded to teachers and preachers, just as one is awarded to martyrs and consecrated virgins.

A third crown? An aureole. How beautiful.

But this must be only for priests and learned doctors of the Church, right? Not so, says Thomas, continuing:

Nor can we admit, as some affirm, that it is due to prelates only, who are competent to preach and teach by virtue of their office, but it is due to all whosoever exercise this act lawfully. Nor is it due to prelates, although they have the office of preaching, unless they actually preach, since a crown is due not to the habit, but to the actual strife, according to 2 Timothy 2:5, “He…shall not be crowned, except he strive lawfully.

St. Thomas clearly explains that the office, or state in life, is not the chief determinant to this crown being awarded. One need not be a priest, or even a teacher by profession, to achieve this success. It is simply necessary that someone strive to teach others the Faith, and thereby win victories against the devil, and for Jesus. It seems obvious that there is a class of people who fall into this category: homeschooling parents.

As Catholic homeschooling fathers and mothers, preaching and teaching is your chosen calling. When we think of preaching and teaching, we envision something grandiose—the travels and missionary work of St. Paul and St. Francis Xavier, or the writings of St. Bonaventure and St. Augustine perhaps. But there is a call to preach and teach in another special place in the world: your living room.

Just like in the example of St. Maximilian Kolbe, this crown is difficult to achieve. It may require dedicating ten, twenty, thirty or more years to teaching your children. It may require dedicating years to teaching your grandchildren. It’s not too late to start this missionary work. As we work our way into the new year of 2012, let the words of St. Thomas console you during the hard times.