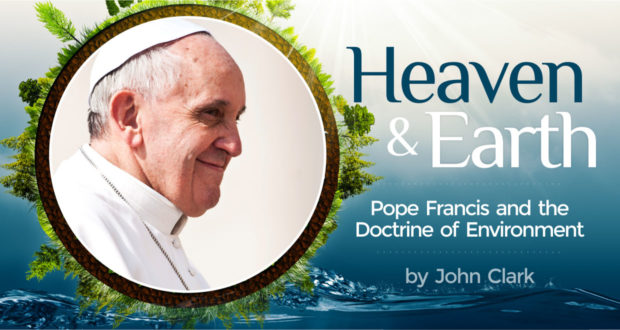 Heaven & Earth: Pope Francis and The Doctrine of Environment

According to recent reports, Pope Francis will be releasing an encyclical about the environment later this year. This announcement has caused the sort of media circus that we have come to expect—some are concerned that the encyclical will be misunderstood while others are eager to misunderstand it.

When the document is released, people will claim that the Church is addressing the topic of the environment for the first time in Her history. Once again, they will be wrong. The truth is that the environment has been a concern of the Church since Her earliest days.

The Church recognizes that the protection, fostering, and care for the environment was one of the first and primary duties that God gave man. As Genesis 2:15 reads: “Then the Lord God took the man and put him in the garden of Eden to tend and keep it.” The Church regards this as an ongoing duty. Even though man sinned and was cast out of the Garden, his duty to tend and keep the earth remained.

But when he sinned, something terrible happened: sin brought on a radical change in his surroundings—in his environment. God tells him in unmistakable terms: “Cursed is the ground for thy sake… Thorns also and thistles shall it bring forth to thee…” (Gen 3:17-18)

This marked the first example of “climate change,” although that term is a radical understatement for what happened to the Earth. We can argue about terminology, but because of the Fall, a rose by any other name would not only smell less sweet, but have thorns. The principle was established: sin had an effect on man’s surroundings.

After Cain’s murder of Abel, God tells Cain: “When you work the ground, it will no longer yield its crops for you.” (Gen 4:12) In the sixth chapter of Genesis, God explains to Noah: “The end of all flesh is come before me; for the earth is filled with violence through them; and, behold, I will destroy them with the earth.” (Gen 6:13)

A global flood, the penultimate environmental cataclysm in history, was the result of sin. Dozens of other examples could be cited. In Biblical times, it is clear that sin disrupted the environment in radical ways.

In the New Testament, the theme from the Old Testament remains, but we are presented with many examples of nature being employed to glorify God. As the Compendium of the Social Doctrine of the Church explains:

In his public ministry, Jesus makes use of natural elements. Not only is he a knowledgeable interpreter of nature, speaking of it in images and parables, but he also dominates it (cf. the episode of the calming of the storm in Mt 14:22-33; Mk 6:45-52; Lc 8:22-25; Jn 6:16-21). The Lord puts nature at the service of his plan of redemption. He asks his disciples to look at things, at the seasons and at people with the trust of children who know that they will never be abandoned by a provident Father (cf. Lk 11:11-13). Far from being enslaved by things, the disciple of Jesus must know how to use them in order to bring about sharing and brotherhood (cf. Lk 16:9-13). (Compendium, 453)

The environment is thy neighbor’s goods.

The Catechism of the Catholic Church clearly illustrates that caring for the environment is a Catholic issue. As the Catechism puts it:

“Far from diminishing our concern to develop this earth, the expectancy of a new earth should spur us on, for it is here that the body of a new human family grows, foreshadowing in some way the age which is to come.”(CCC, 1049)

As the Catechism explains, we cannot lose sight of the fact that eschatological goods do not contract Earthly goods. Caring for the earth and its inhabitants and caring about heavenly things are complementary—not binary—pursuits. Properly caring for the environment is a Catholic ideal. And to disregard the environment can be sinful.

Christian environmentalism, the belief that the Earth should be properly safeguarded due to divine command, is doctrinal. Christianity does not mandate the use of windmills, but neither does it consider it quixotic to protect the Earth. It is our duty.

One of the clearest links between caring for the environment and Catholicism was made by Pope Saint John Paul II:

“…it is the relationship man has with God that determines his relationship with his fellow men and with his environment. This is why Christian culture has always recognized the creatures that surround man as also gifts of God to be nurtured and safeguarded with a sense of gratitude to the Creator. Benedictine and Franciscan spirituality in particular has witnessed to this sort of kinship of man with his creaturely environment, fostering in him an attitude of respect for every reality of the surrounding world”. (John Paul II, Address to participants in a convention on “The Environment and Health, par. 464” (24 March 1997), 4: L’Osservatore Romano, English edition, 9 April 1997, p. 2.)

Man’s relationship with God “determines his relationship” with his environment. Could the pope have used any stronger terms? If environmental concerns were presented in this way, Christians would understand why they should be embraced.

However, the praiseworthy concept of caring for the environment is often code for unrelated politics and erroneous agendas such as population control. The logic is that since man and his carbon footprint are the problem, fewer men mean fewer problems. But the Church objects to this tortured logic.

The Church recognizes instead that the dual divine commands to “be fruitful and multiply” and to care for the Garden are not contradictory commands. Nor could they be.

As the Catholic views things, God has given man the power, the creativity, the genius, to overcome environmental challenges. It is not the footprint of man on which we should be focused, but the fact that man is the fingerprint of God. It is only when we begin to re-appreciate the harmony between God and man that we will once again appreciate the harmony in nature.