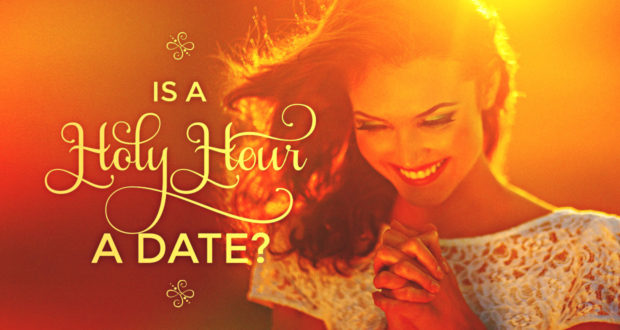 Yesterday morning, Lisa informed me that she would like me to take her out to breakfast. She explained to me that we “Hadn’t been on a date in a while.”

“What do you mean we haven’t been on a date in a while?” I responded in amazement. “We went to Holy Hour just last night!”

So began the great discourse of the day. (By the way, most of the ensuing conversation occurred over breakfast at a local restaurant, lest there be any doubt as to who was triumphant in our little exchange.) As she enjoyed the spoils of her victory—in this case, an egg sandwich—Lisa explained that a Holy Hour didn’t count because I didn’t buy her any food, and there was no coffee.

“But buying food can’t be the criteria for a date,” I pleaded. “After all, I bought the food in the fridge. For that matter, I bought the food on the floor… and in the couch.” (She had a point about the coffee. Athanasius, the oldest of my nine children, bought that.) Lisa was unmoved.

Looking for an official ruling, I did what I usually do in such matters: I turned to the Doctors of the Church. However, I quickly discovered that most of the Doctors had never been on a date and had little advice on such matters. Lacking an ecclesiastical reference, I turned to the secular authorities. Merriam-Webster.com defines date as: “a social engagement between two persons that often has a romantic character.” But that seems to beg the question as to what constitutes “romantic.” Merriam-Webster’s third definition of “romantic” is: “impractical in conception or plan.”

(Whoever wrote that definition of “romantic” was on to something. According to the standards of many experts, having nine children is “impractical.”)

So much for an official ruling.

Thinking back a generation or so, when Lisa and I were dating, or “courting” (and I really have no idea what that means), we went on Rosary walks together, we went to pro-life marches together, we listened to religious talks together, and we studied for Doctrine tests together. You might be thinking: “Didn’t you do any fun stuff?”

Let me tell you something: that was fun stuff. That’s what Catholics do on dates. At least, that’s what we did.

We were young, Catholic, and broke. (Come to think of it, not much has changed… except the “young.”) Oh, and to you young Catholic men out there: if you don’t think reading Aquinas with a girl is romantic, you’re with the wrong girl.

I didn’t learn a lot from our discussion yesterday other than two things: first, egg sandwiches are a better way to start your day than work, and second, whether or not it’s a date, any couple who finds themselves at a Holy Hour together is doing a lot right.

For the record, here is my definition of a married date: “A married date is any activity between a husband and wife that occurs without kids.” By that definition, a Holy Hour counts.

So, in the spirit of a blog, I ask you, the well-informed Catholic reader: “Is a Holy Hour a date?”