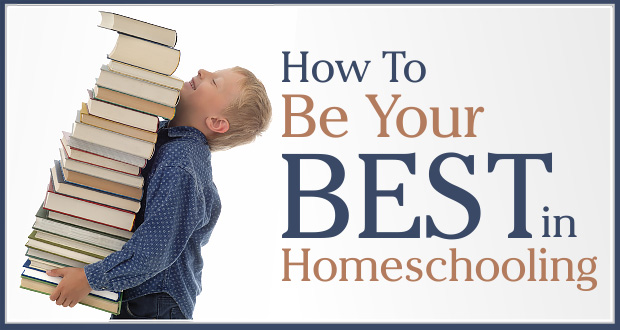 How To Be Your Best In Homeschooling

In my experience, no one makes comparisons more than homeschoolers. We say things like: “Mrs. Jones is better than I am at teaching math,” or “Why can’t we get our kids to do their violin practice as well as Mrs. Smith’s children?” or “That family doesn’t let their kids watch television—they’re better than we are.”

When it comes to comparisons, we do it so often that we don’t even think about it any more.

Comparisons often ruin relationships because they focus on what is absent more than what is present. For the same reasons, comparisons can ruin homeschooling.

And, yes! Someone homeschools their children better than you.

Does that mean you’re a failure? Of course not.

It’s time that we homeschoolers accept a basic truth: being your best has nothing to do with the other guy. It has to do with you.

I first got a glimpse of this fact one afternoon when I was about ten years old, when my Dad took me golfing. It was my first time on a golf course, and I couldn’t understand why my Dad liked the game. After all, I had seen my dad play softball and heard the excitement of the crowd when he hit the ball. In golf, no one cheered, even when you made spectacular shots. Not only did no one cheer, but no one seemed to even care.

On the back nine, my dad met a friend of his who explained to me why he loved golf. He said that, in most sports, you are competing with someone else, but in golf, you are competing against yourself. At first, I didn’t understand, but as the game continued, I guess I came to understand what he meant—about why this sport was different from others.

Away from the cheering crowds and the scoreboards, removed from an illusory world where the success of one equals the failure of another, there is a place where we can try to be better than we were yesterday.

That’s where attitude comes in. Lisa and I recently showed the children a video about an Australian man who was born without limbs. Though he is not Catholic, there is a lot that we Catholics can learn from him. His name is Nick Vujicic, and his life slogan is “No arms. No legs. No worries.”

Once you watch him speak for a minute, the most noticeable characteristic about Nick is his smile. Why? Because he believes that God has a plan for him, and he is excited about fulfilling that plan, and his joy is evidenced in his smile. He realizes each of us is called by God do something wonderful and unique. He says that he didn’t understand the purpose of his life until he read the Gospel account of Jesus curing the blind man. Our Lord says that the man was born blind so that the works of God can be revealed through Him.

Nick doesn’t compare himself to those with their limbs. He understands something that many of us often forget. The greatest competition we ever experience is within ourselves. You have a unique set of challenges and gifts. It doesn’t matter how well Mrs. Smith teaches math or how well her kids play violin.

What matters is how you use your own gifts better today than yesterday.