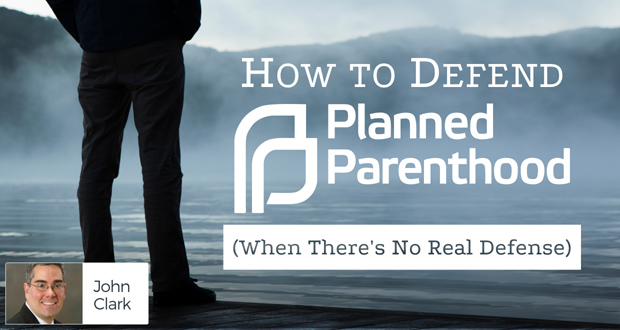 How to Defend Planned Parenthood (When There’s No Real Defense)

If you’re like me, you’ve come across some newspaper articles defending Planned Parenthood against the recent allegations of misdeeds.

Before you use these to line the bottom of your bird cage, you might consider using them to teach your older children some lessons in logic. Or some lessons in fallacy, if you will. As you will see, some of these articles are riddled with fallacies.

Here’s a quiz I assembled using actual statements from two such articles.

Here is the quiz:

1. “The politicians howling to defund Planned Parenthood care nothing about the truth here, being perfectly willing to undermine women’s reproductive rights any way they can.” (New York Times)

A. Ad Hominem
B. Circumstantial Ad Hominem
C. Attacking the Straw Man
D. All of the Above.

Explanation. This question is tricky because the statement is so obviously an ad hominem (an attack on character rather than on the argument) that you just want to check “A” and move along with your life. But give the other options a chance.

A slight twist on the garden-variety attack on character, the circumstantial ad hominem, is an attack not only on character, but on the perceived intention of the character. And there are few greater examples possible than the universal one that the author provides: that some politicians “care nothing about the truth.”

What about answer C? Attacking the straw man changes the original argument to make it easier to argue against, and that is exactly what this statement does. The argument is not whether anyone wants to “undermine women’s reproductive rights,” but whether or not Planned Parenthood has a Livers-For-Lamborghini’s program in place.

2. “But it is the latest in a series of unrelenting attacks on Planned Parenthood, which offers health care services to millions of people every year.” (New York Times)

A. Non Sequitur
B. Argument From Consequences
C. Appeal to Fear
D. All of the Above

Explanation. This statement is a non sequitur because discussing the provision of health care services diverts the argument to irrelevance. Let’s use an example: Joe is videotaped bragging about a theft he committed, and is later brought to trial. His defense attorney argues: “This trial is the latest in a series of unrelenting attacks on Joe, who cooks dinner for his wife every night.”

Joe sure sounds like a great cook, not to mention a wonderful husband. Now can we talk about the matter at hand: the theft?

This is also an argument from consequences because it implies that if Planned Parenthood is defunded, that “millions of people” would suffer as a result. For this reason, it is also an appeal to fear.

3. “There appears to be no end to the creative deviousness of people looking to harm Planned Parenthood, America’s most important reproductive healthcare provider.” (LA Times)

A. Begging the Question
B. Ad Hominem
C. Poisoning the Well
D. All of the Above

Begging the question involves stating the conclusion in the premise. If one claims that someone is the “most important” entity, that is a conclusion. It’s also a strange characterization insofar as this: wouldn’t “America’s most important reproductive healthcare provider” be more involved with what used to be considered the natural result of reproduction: namely, live childbirth?

An ad hominem is an attack on character rather than on the argument. Example: “Of course Joe is wrong about the issue of zoology; he’s a known thief.”

Poisoning the well means to mock and/or condemn a position prior to, or instead of, addressing it. Example: “Before we get started with this debate tonight, let me just point out that Joe cheats on his wife.”

4. “With proper safeguards, why shouldn’t it be used in research that might one day find a cure for Parkinson’s, Alzheimer’s, AIDS, dementia, diabetes or heart disease?” (LA Times)

A. Red Herring
B. False Dilemma
C. Consequentialism
D. All of the above

This statement is a red herring (employing a distracting and irrelevant statement) insofar as it changes the topic from organ harvesting to diabetes.

The argument is also a false dilemma (the idea that there are only two solutions to a problem). Here’s why. Implied is this statement is that either we use fetal tissue to save us from the horrors of heart disease, or we’re doomed.

This statement is also textbook consequentialism, which we can put under the category of moral fallacy. Consequentialism is the idea that an act should be judged, not on its ethical merits or demerits, but on the consequences of the act. In other words, an evil today could result in good tomorrow, and it is therefore acceptable.

Though the writer referred to abortion in this sentence, the word “it” could mean anything here to make the same point.

Let’s look at it again:

“With proper safeguards, why shouldn’t —– be used in research that might one day find a cure for Parkinson’s, Alzheimer’s, AIDS, dementia, diabetes or heart disease?”

With minor differences, this argument has been used to attempt to justify almost anything and everything.

5. “According to a letter sent by Roger Evans, a lawyer for Planned Parenthood, to the House Energy and Commerce Committee, the video is a result of a yearslong campaign of deception.” (New York Times)

A. Appeal to false authority
B. Non sequitur
C. Loaded Language
D. All of the above.

Answer A is tempting. Worse than irrelevant, lawyers are not only biased, but are compensated to be biased. Example: “Joe’s not guilty because his lawyer says he’s not guilty.” Oh, well then. A trial at this point seems a waste of time.

Claiming that a video is “a result of a years long campaign of deception” is also a non sequitur.

Loaded language is a fallacy in which hyperbolic words are used in order to garner agreement, as in the term “campaign of deception.”

A. Appeal to ignorance
B. Moral high ground
C. Moving the Goalposts
D. All of the above

Moral high ground is used to present oneself as more ethical than another, regardless of objective standard.

Moving the goalposts means requiring a higher level of evidence than usual, or even possible. For instance: “We saw Joe brag about a theft on tape, we observed Joe selling stolen goods from the back of his car. Then Joe admitted to the theft. But we are going to need much more evidence than that before we indict Joe.”