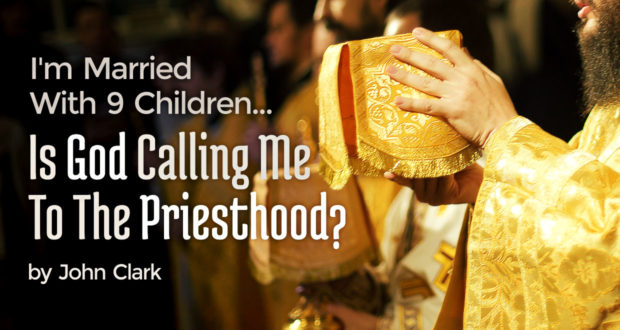 Is God Calling Married Men To The Priesthood?

When Pope Francis recently lifted the long-standing prohibition on married priests in the Eastern Catholic Church in North America and Australia, it received scarce media coverage. But under-reporting notwithstanding, let there be no doubt: for us Eastern (sometimes called “Byzantine”) Catholics—and, by extension, for all Catholics—this marks a profoundly important moment in our lives, and in the life of the Church.

The Eastern Church in the West

To explain why, let’s begin with a little background. While it is the tradition in the Roman Catholic Church that only unmarried men may be ordained, it is the tradition in the Eastern Catholic Church that married men are allowed ordination. Though in many parts of the world this Eastern tradition has been uninterrupted, it has been disallowed in America in recent times. The reason for the prohibition dates back to the late nineteenth century, when the American bishops spoke out against the practice, claiming that the presence of married Byzantine priests presented a “constant menace” and horrible scandal to many Catholics. A declaration of American Archbishops in 1893 summarized their position:

“It is the solemn judgment of the Archbishops of the United States that the presence of married priests of the Greek rite in our midst is a constant menace to the chastity of our unmarried clergy, a source of scandal to the laity and therefore the sooner this point of discipline is abolished before these evils obtain large proportions, the better for religion, because the possible loss of a few souls of the Greek rite, bears no proportion to the blessings resulting from uniformity of discipline.”

Whether the “scandal” of married Byzantine clergy amounted more to phantom than menace, the Vatican took their dire warnings seriously. In 1929, the Vatican issued regulations against the married priesthood for Eastern Catholic men in North America. Not only were married men disallowed ordination, but a decree was issued that forbade the exercise of the priestly ministry by married priests. In America, married priests of the East were faced with several choices. One, they could discontinue their priestly ministry in America. Two, they could leave the Catholic Church for the Orthodox Church to continue acting as priests, although not Catholic priests. Three, if they could afford to do so, they could travel with their families to Eastern European dioceses that allowed married priests. However, considering that 1929 was the start of a worldwide depression, followed by political, World War II, and the Communist takeover of Eastern Europe, this option was not realistic for most people. While it is difficult to estimate how many men chose each of these paths, Cardinal Leonardo Sandri recently estimated that 200,000 people left the Catholic Church and joined the Eastern Orthodox Church in reaction to the decree. While the American bishops had predicted the “possible loss of a few souls” in theory, the Eastern Catholic Church was decimated in practice.

Though 1929 marks a sad moment in the life of the Eastern Church in America, things have been changing. The Second Vatican Council document Orientalium Ecclesiarum of 1964 declared:

“History, tradition and abundant ecclesiastical institutions bear outstanding witness to the great merit owing to the Eastern Churches by the universal Church.… Those who, by reason of their office or apostolic ministries, are in frequent communication with the Eastern Churches or their faithful should be instructed according as their office demands in the knowledge and veneration of the rites, discipline, doctrine, history and character of the members of the Eastern rites.”

Change Made by Pope Francis

But is Pope Francis who has restored tradition to the East, once again allowing the married priesthood. As some of us Byzantines have observed, Pope Francis, who has only one physical lung, is helping the Church breathe with two. Since Pope Francis has lifted the ban, Eastern Catholic married men in America may now become priests. The Sacrament of Matrimony no longer precludes men from receiving the Sacrament of Holy Orders. The ramifications of this are, on an ecclesiastical level, immense.

On a personal level, it would be no exaggeration to say that they are staggering. Certainly many young Catholic men at least consider the possibility of the priesthood. Yet, in the past, a choice between marriage and the priesthood had to be made. But now, there is no longer the necessity for Eastern Catholic men to choose between two goods. A door that was closed—the Royal Door—has now been opened.

Let’s pray that many of us are called.

And that many of us are chosen.