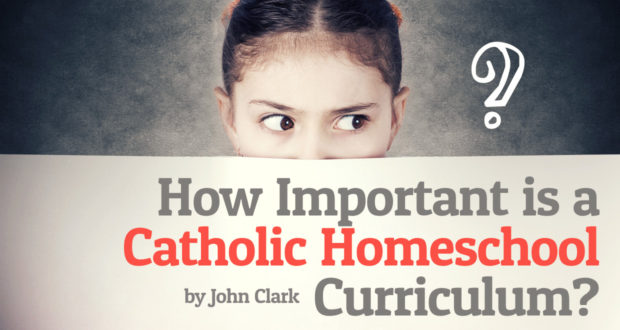 How Important is a Catholic Homeschool Curriculum?

Last year, I finished writing the rough draft of an online Catholic economics course for Seton Home Study School. (It should be available for credit by fall.) Prior to this, I had not helped write a course for many years, and certainly never in this much detail. After spending much of my life in the financial field, it was surprisingly enjoyable to write this course.

For some bizarre reason, I still have my Economics textbook that I used at Christendom College, and I occasionally used it for a reference as I wrote the course. It was fun to see what I had highlighted and written in the margins.

The book served as another reminder: I had the luxury of studying a book that was sympathetic to the free-market. Many students don’t have that luxury. Many students are indoctrinated into ideologies that have been condemned by the Church, such as socialism and Marxism. Spending time researching other textbooks makes that clear pretty fast.

Curriculum matters more than many people realize. A student’s course of study can dictate the course that the student’s life takes, and it centers on curriculum. Curriculum means the difference between studying St. Thomas Aquinas or Friedrich Nietzsche in philosophy; between reading C. S. Lewis or Kurt Vonnegut in literature; and between examining St. Augustine or Lenin in history.

Forget about the three R’s; which of the three C’s will be a greater influence: the Cathechism of the Catholic Church or the Common Core Curriculum? Each teacher or learning institution must decide what that their curriculum will look like, and every student will be required to take courses in that curriculum. That presents an enormous responsibility.

Frank Capra wrote that movie “directors have the power to speak to hundreds of millions for two hours, and in the dark.” (Frank Capra, The Name Above the Title, p. 178) Capra marveled at that kind of power and influence. But if a movie can have that kind of effect, think about how much effect that teaching can have. A curriculum is taught to students for hundreds and hundreds of hours, in a way that may leave students in the dark when it comes to the most important things.

For the writer of courses, that is a daunting observation. It is something that I kept in mind throughout my writing. I knew that I had to write a course that not only informed the students about economics, but prepared them for a lifetime of secular objections to the Catholic points made in it.

From a Catholic perspective, economics is about persons and their relationships with one another; most importantly, it is about our relationship with God. Does that take the study too far? I don’t think so, and neither will Seton students. They are accustomed to a curriculum in which every area of study is saturated with the Faith.

As a practical matter, when you are asked if you can write a Catholic economics course by an institution that produces Catholic handwriting courses, you answer in the affirmative!

I am currently writing an online Catholic American Government course. Like just about any other course, it covers the American Government basics: how a bill becomes a law, how old a senator must be to get elected, and so forth. But the strength of the course is that it is Catholic. How?

All of these subjects are addressed from a Catholic perspective at Seton, and should be at every school or university that calls itself “Catholic.” With any luck, this course will also be available later this year.

If only I can locate my political science textbooks.