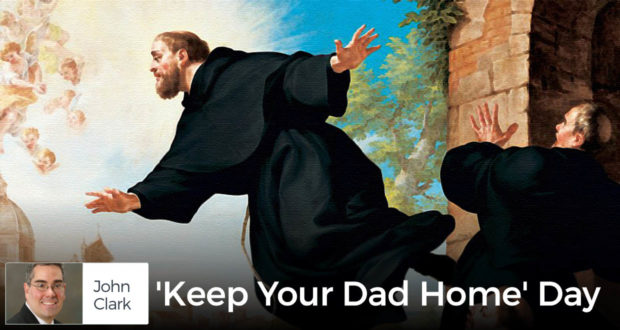 Years ago, someone popularized the idea of fathers taking their children to work for a day. Hardly a novel idea, since most of recorded history recounts children and fathers working together; yet in the modern world, the idea make a lot of sense.

When a child understands what his father does all day at work, it is easy to see how the relationship can benefit.

When I worked as a stockbroker and brought my high-school age children to work with me, they would come into my office and see the multiple computer screens lit up with flashing stock quotes.

I tried to explain to them what I was doing and what all those flashing letters meant, but I doubt they were able to understand the subtleties of modern finance. Nevertheless, one of my children told me recently: “When I used to come into work with you, I wasn’t sure what you did, but I knew it was important.”

I think that’s a pretty healthy response to seeing a dad at work. It not only helps the child, but it also helps the father to communicate the importance of his work to his children.

As I’ve said in different ways in dozens of articles: the biggest problem in the Catholic homeschooling world is not the lack of curriculum; it’s not that Billy is a semester behind in Geometry; it’s not that your search for a better geography book has proven fruitless. The biggest problem is that dads are not involved enough in the process. And if that’s a secret, it’s a poorly kept one.

At other random homeschool presentations, moms commonly outnumber dads by over 5 to 1, and sometimes more like 10 to 1. This is pragmatically explained away, but outside of homeschooling, what other aspect of parenting involves this type of ratio?

Moreover, I suspect that the ratio inside the home is sometimes even greater, and the question becomes a binary one, as in “My wife does the homeschooling. I don’t.” (I’ve heard countless forms of that statement in the past thirty years.) Seton’s internal research has illustrated the positive correlation between fatherly involvement and homeschool success. We fathers need to step up to the plate. Home plate.

To that end, I suggest the first and inaugural “Keep Your Dad Home Day” for September 18th, the feast of St. Joseph of Cupertino. For many of us, that’s a couple weeks after homeschooling begins. That gives our wives and children the chance to unpack their boxes and sharpen their pencils.

Why that feast day? St. Joseph of Cupertino was the worst student in his class. In fact, Joseph’s story is one of the most hard-luck stories in history, Christian or otherwise. He was rejected by almost everyone he came across, and some rejected him on numerous occasions. At one point, he was given the job of merely taking care of a mule, although no one thought he could accomplish even that task properly.

However, after several years of everyone observing his holiness and love of God, Joseph was allowed to sit for an exam, the passing of which meant that he could follow to the priesthood. Joseph was asked one question, the answer to which he explained so incredibly well that the examiner did not feel the need to ask any further questions. This was fortunate for Joseph, since he knew the answers to little else.

Joseph later became a priest and his life as a priest was one of the most miraculous in history. And in many ways, it began with knowing the answer to one question on an exam.

So on September 18, stay home — and homeschool.

What we would like is for fathers to write in with their stories of how they spent their day, what they learned by staying home, and the effect that this day had on their families. Send me your stories, and I will write a blog about it shortly thereafter.