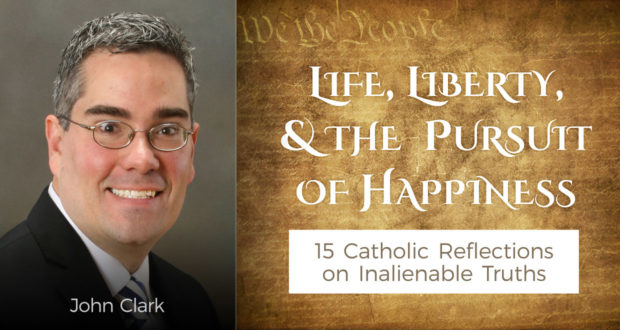 As we Americans celebrate the signing of the Declaration of Independence, it’s a great time to look at some statements of Catholics over the years on life, liberty, and the pursuit of happiness.

Turns out, we Catholics love all three.

“This century has shown that once the right to life of some category of people is denied, then all human rights are in jeopardy.” – Pope St. John Paul II

“The fundamental human right, the presupposition of every other right, is the right to life itself.” Pope Benedict XVI

“The right to life: This right is basic and inalienable. It is grievously violated in our day by contraception, sterilization, abortion and euthanasia, by widespread torture, by acts of violence against innocent parties, and by the scourge of war, genocide, mass campaigns against the right to life.” Pope Paul VI, 1974

“This is what is happening also at the level of politics and government: the original and inalienable right to life is questioned or denied on the basis of a parliamentary vote or the will of one part of the people…” Pope John Paul II, Evangelium Vitae, 1995

“Those who hold the reins of government should not forget that it is the duty of public authority… to defend the lives of the innocent… Among whom we must mention in the first place infants hidden in the mother’s womb.” Pope Pius XI, Casti Connubii, 1930

“All life has inestimable value even the weakest and most vulnerable, the sick, the old, the unborn and the poor, are masterpieces of God’s creation, made in his own image, destined to live forever, and deserving of the utmost reverence and respect.” Pope Francis

“…We exhort all people and all classes of society to that peace which finds its basis and nurture in justice, liberty, and love.” Pope Pius XII, Datis Nupperime, 1956

“The end, or object, both of the rational will and of its liberty is that good only which is in conformity with reason… if the possibility of deflection from good belonged to the essence or perfection of liberty, then God…would have no liberty at all…” Pope Leo XIII, Libertas

“These dangers, that is, the confounding of license with liberty…have so wrapped minds in darkness that there is now a greater need of the Church’s teaching office than ever before…”
Pope Leo XIII, Testem Benevolentiae Nostrae

“…efforts of all kinds are being made to supplant the kingdom of God by a reign of license under the lying name of liberty.” Pope Saint Pius X, Communium Rerum, 1909

The Pursuit Of Happiness

“Final and perfect happiness can consist in nothing else than the vision of the Divine Essence.” Saint Thomas Aquinas, S.T., I-II, Q. 3

“To understand things that are important and good, or even divine, is the happiest thing.” St. Augustine

“The wholehearted acceptance of the will of God is the sure way of finding joy and peace: happiness in the cross.” St. Josemaria Escriva

“And it is because you don’t know the end and purpose of things that you think the wicked and the criminal have power and happiness.” Boethius

…(M)an cannot find true happiness — towards which he aspires with all his being — other than in respect of the laws written by God in his very nature, laws which he must observe with intelligence and love. Pope Paul VI, Humanae Vitae, 1968