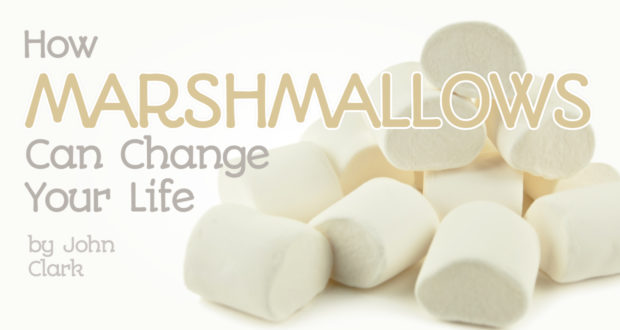 How Marshmallows Can Change Your Life

Of all the spiritual misconceptions of the modern age, poverty is one of the most misunderstood. Part of the difficulty with poverty is that the word itself has disparate meanings.

It can refer to the condition of lacking the means to provide material needs. Pope Benedict XVI referred to that sort of poverty as a “poverty to be fought.” But the word poverty can also refer to a free-will decision, sometimes being called voluntary poverty; as such, it is recognized as a virtue.

The core of the virtue of poverty lies in detachment from material goods. And in the sense that poverty is about moving beyond our over-attachment to material goods, all Christians are called to practice poverty.

That doesn’t mean that we can’t own anything. Quite the contrary: our state in life might require us to own things. For instance, under normal conditions, parents cannot take formal vows of poverty because private property is necessary to raise their children. But even under these conditions, some poverty must be practiced. In these instances, poverty is more about needing less than having less. We often put far too much faith in material goods, and as a consequence, far too little in spiritual goods.

Poverty is an essential nutrient in the Christian spiritual diet. Without it, we can succumb to the hunger of materialism and drive a wedge between ourselves and eternal life. As far as poverty is concerned, to paraphrase a popular slogan: “You can’t get home without it.”

But how do we develop a sense of detachment? How do we get started? I propose one answer that might seem odd.

Here it is: give up marshmallows. For the rest of your life.

With apologies to marshmallow manufacturers everywhere, here is my logic. Even if it’s a comparatively unimportant thing, it’s a little scary to give something up forever. There is finality to it—at least, an Earthly finality. But it’s also a recognition that this life is not final.

When we give something up, we are sacrificing a good on Earth because of the belief in a greater good in Heaven. To get there, we must not cling too strongly to anything on Earth. Giving up marshmallows is a baby step toward virtuous poverty.

You might think that giving up marshmallows for the rest of your life is pretty inconsequential, but I’m guessing that it’s not. Detachment from marshmallows is not about marshmallows—it’s about detachment. A disordered attachment to material goods keeps us from entering Heaven, the home that God created for us. On the contrary, poverty spells a detachment from material goods and makes our Heavenly home more attractive to us.

“For poverty is that heavenly virtue by which all Earthy and transitory things are trodden under foot, and by which every obstacle is removed from the soul so that it may freely enter into union with the eternal Lord God. It is also the virtue which makes the soul, while still here on earth, converse with the angels in Heaven. It is she who accompanied Christ on the Cross, was buried with Christ in the Tomb, and with Christ was raised and ascended into Heaven, for even in this life, she gives to souls who love her the ability to fly to Heaven, and she alone guards the armor of true humility and charity.”

As Saint Francis tells us, poverty and detachment mean the proper orientation of spirit versus flesh and of mind versus matter.
Detachment has its objectors, even among Catholics. The argument is that since God gave us a wonderful world to enjoy, we should enjoy it. So they might ask: doesn’t God want us to enjoy marshmallows?

Of course He does. He also wanted us to enjoy the Garden of Eden. But man fell, and man began to believe that Earthly things were the best things. They’re not. Heavenly things are the best things. Simply put, the marshmallows in Heaven are better than the ones on Earth.

I’m not suggesting that you give up marshmallows forever—just for the rest of your Earthly life.

By the way, it doesn’t need to be marshmallows. Make it some other small thing, like cinnamon gum, glazed donuts, or raspberry tea. Pick something to give up.

That seemingly small act might make a world of difference in your spiritual life. It’s a detachment from something little, but an attachment to something much more wonderful.