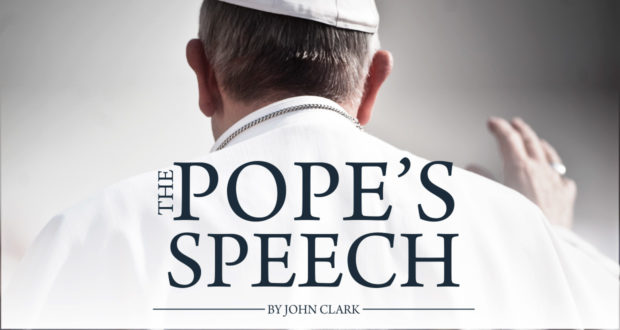 Pope Francis Just Delivered The Best Speech of the Year

On October 18, Pope Francis approached an audience to deliver perhaps the most important speech of his papacy.

Five days previous, a draft prepared by the Synod on the Family was released. This document was viewed by some Catholic commentators as a virtual nullification of previous dogmatic teaching. Some members of the clergy openly expressed their disdain for one another’s opinions in the wake of this document.

The secular media seemed to enjoy the rift, gleefully declaring that the Catholic Church was effectively in a shambolic state. Indeed, history will find it nearly impossible to adequately express the mood of many conservative Catholics in the days that followed.

After such a week of chaos, Pope Francis rose to give a speech that attempted to accomplish what many people must have thought hopeless: to pastorally unite the members of the Mystical Body of Christ on earth in a way that was doctrinally sound. Succeed or fail, it would likely be considered the most important speech of his papacy. In light of all this, Pope Francis stood before the podium.

As I read the words of Pope Francis’ speech, I had a feeling of déjà vu. There was something in me that insisted that I had viewed this scene before. And then I remembered what it was.

In 2010, a movie called The King’s Speech was released. The film recounted the events of the reluctant rise to power of King George VI of England. As the movie progresses, the viewer develops a sense of pathos toward King George, as the viewer begins to grasp that the gravity of office carries special burdens known only to its occupants.

Ultimately, King George, after being thrust into an office that he never wanted, is required to deliver a speech to the world that is meant to re-assure all his subjects that the United Kingdom would be resolute in its stand against Hitler and against evil. Everyone, including King George, knew that this speech would be pivotal to the spirit of a nation, and would define him as a leader.

Pope Francis faced a similar moment to that of King George. His first year as pope has been marked by open criticism by both the right and the left. He has endured mockery and personal attacks on his character.

Further, after one of the most tumultuous weeks in recent ecclesiastical history, Pope Francis rose to speak. He must have known what he needed to do.

He needed a speech that was doctrinally strong, yet loving and merciful; that was fatherly, yet brotherly; that was loving, yet challenging. A speech of this caliber would be difficult under the easiest of circumstances, not to mention the most difficult. But Pope Francis delivered on all counts.

It is a truth of history that inspirational speeches often arise from great moments of difficulty. This speech was an example of that.

After thanking all who had worked on the synod, Pope Francis warned the faithful of five temptations that we must overcome:

After challenging the faithful, Pope Francis then calmed the faithful and re-assured us of the love of God. He reminded us that times have been rocky before, but that God always cares for his Church.

At the conclusion of his speech, the audience—consisting of those who had recently been openly argumentative toward each other—stood side by side and gave Pope Francis a four-minute standing ovation. As a speechwriter, let me assure you, that is astounding.

Will history remember this as a great speech? We have to consider that the impact of speeches is often unknowable in the moment in which is it delivered. When one declares something a “great speech,” there is something of a predictive nature to that statement. It is not only an observation of what has occurred at the moment, but a prediction about the impact that it will have in the moments to come.

For instance, when Ronald Reagan delivered his “Berlin Wall” speech, it was not universally hailed as a “great speech” nor was it thought to be an overwhelming success at that moment. Little did anyone guess that Reagan’s speech had helped changed the world. Though few people may have realized it at the time, Reagan’s demand to “tear down this wall” became the battle cry of a generation.

As a reader of the writings of Pope Francis, my belief is that this speech is very much who he is. And when we are forming our impressions of him, it is unfair to ignore this speech. It is the laity’s decision—it is the decision of you and of me—whether this will become a great speech. Pope Francis has done his part.

It remains to be seen whether we will do ours.