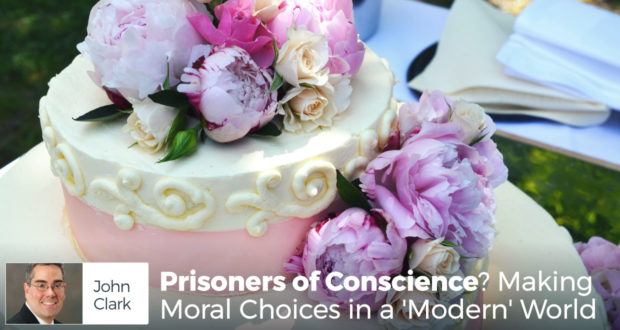 Prisoners of Conscience? Making Moral Choices in a ‘Modern’ World

With the events surrounding the same-sex marriage licensing controversy in Kentucky, one of the things that has struck me is how dismissive the political class has been on the issue.

Two years ago, commentator Bernard Goldberg wrote a column titled: “Gay Rights vs. the Rights of the Faithful.” Since his viewpoint seems to increasingly represent the views of many, it is worthwhile analyzing that column.

“Let me offer my succinct analysis of the plight of these put-upon Christian small business owners who find gay unions a sin frowned upon by God Himself: Too bad! Believe whatever you want inside your church, but when you set up shop on Main Street you have to play by America’s rules—not the church’s.”

Let’s take a look at these cases. The Washington florist refused to decorate for a same-sex wedding. She was subsequently sued by the State of Washington and the ACLU. She has stated that due to the potential legal fees and fines, she could lose her business, her home, and her life savings. (In perhaps the most telling aspect of the case, among the damages claimed in the case was seven dollars and ninety-one cents: the cost of driving to another florist.)

In New Mexico, the photographer has spent eight years in litigation to fight a $6,000 judgment that was imposed when she refused to photograph a same-sex wedding.

In Oregon, a bakery owned by a Christian couple refused to bake a wedding cake for a lesbian couple. The bakery owners were fined $135,000. This may have been the first “civil rights” issue since the days of Marie Antoinette to involve frosting.

Goldberg seems untroubled by these lawsuits. Here’s my question: Does anyone find this proportional? There used to be a saying that has fallen out of favor: “Let the punishment fit the crime.”

Speaking of proportionality, because some same-sex couples want their unions to be recognized by the state as marriages, the laws in almost every state were disregarded, the Constitutions of these states were vacated, the votes of tens of millions of people were overturned, and the entire societal understanding of marriage and child-raising must change.

Apparently, that level of accommodation is okay. But if you’re a clerk who doesn’t want to sign a marriage license or a baker who just doesn’t want to bake a cake, “Too bad!”

By the way, some of those in favor of traditional marriage were famously accused by Supreme Court Justice Anthony Kennedy in United States v. Windsor of being motivated by a “bare…desire to harm” others. Unlike Kennedy, who can apparently read the hearts of tens of millions of people whom he’s never met, I possess no such gift; yet I wonder about the motivation of those who thunderously applaud the imposition of insurmountable financial hardship on people for following their consciences.

“People of faith, of course, will not buy this argument. They believe God’s rules—or their interpretation of those rules—trumps anything civil society might come up with. They’re wrong, of course, so let’s try to help them see the light.”

Mr. Goldberg, there is a term for the moral choices people make based on their interpretation of God’s rules. It’s called “conscience.” Once upon a time in America, it was popular to defend the rights of conscience.

Today, society seems intent on punishing all who dare to follow their conscience and do what they see as right. To seek out Christians for lawsuits seems orchestrated, vindictive, and for lack of a more high-dollar word, mean. And Mr. Goldberg’s response is to help Christians “see the light.”

The more I delve into this topic, the more I realize that some people simply do not understand what conscience is; nor do they understand the actions of someone who attempts to follow their conscience. I don’t mean that in a pejorative sense; I’ll assume ignorance on their part. But Christians are not ignorant of conscience.

In fact, the idea of conscience—and the duty to properly form one’s conscience—is central to his or her every moral action. As the Catechism of the Catholic Church states:

“Conscience is a judgment of reason whereby the human person recognizes the moral quality of a concrete act that he is going to perform, is in the process of performing, or has already completed. In all he says and does, man is obliged to follow faithfully what he knows to be just and right.”

“Christians, like all people of good will, are called upon under grave obligation of conscience not to cooperate formally in practices which, even if permitted by civil legislation, are contrary to God’s law.”

Moreover, under all but the most dire of circumstances, I would regard it as sinful to try to force another to violate his conscience, even if I disagreed with him in principle.

In ancient Rome, Christians were ordered by the Roman government to offer sacrifices to pagan gods in an effort to force Christians to violate their consciences. Perhaps the contemporary logic of political commentators would be: “If you want to sneak down into the catacombs once a week for Mass, go ahead. But once you go out onto the streets of Rome, you play by Roman rules, regardless of what those rules may be.”

Or, more succinctly: “Too bad.”