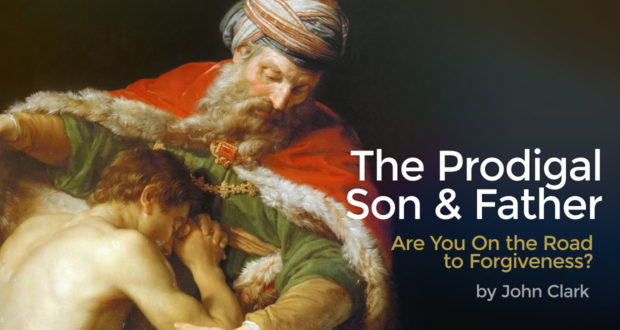 The Prodigal Son & Father: Are You On the Road to Forgiveness?

One of the most endearing parables of Jesus is the story of the prodigal son. Like many others, I have identified at various times with either of the two boys.

At some points, I have felt like the long-suffering good son who wonders why seemingly hard-earned respect fails to come his way. At other moments, I have been the prodigal, who set off looking for hog heaven only to find swine hell.

But as I grow older, I have begun to identify with the patriarch in the parable. That is not a commentary on my children, or for that matter, on my parenting skills. Rather, it is an observation about the nature of forgiveness and the role that each of us has to play in it.

The parable presents us with a dysfunctional family dynamic involving these three people. One senses that the prodigal’s departure was a long time in coming; his mind had entertained thoughts of leaving home long before he physically left. He was discontented being the mere son of a father…even a great father. The prodigal’s routine had become routine, and he had enough of it.

The other son, though he considers himself superior to his brother, has his own problems. He may not be prodigal, but he is not prodigiously faithful either. Though he remains loyal to his father, we later discover that it has been a rather begrudging commitment, shown in the fact that he laments that his father had never funded a celebration for him and his friends. He even refused to attend the party for his wayward brother’s return.

One can guess that these brothers often fought with each another, and that there was no love lost between them as the prodigal son leaves town.

But the father does lose love. He loses his son’s love.

The father has devoted his life to his family, but the prodigal son’s departure forms an unmistakable response to his father: it’s not good enough. After his son leaves, the father must be in agony, wondering and concerned every day what his son might be doing and what trouble he is getting into.

When you ponder the sadness and suffering that the father endured, you gain a sense of the majesty of what happens next. When the father catches the first distant glimpse of his prodigal son, he runs out to the road to embrace him. As the Gospel of Luke recounts:

“But when he was yet a great way off, his father saw him, and had compassion, and ran, and fell on his neck, and kissed him.”

Jesus presents a challenge to us by relating this parable. Here is the challenge: are we like the father? Are we not only willing to forgive, but race to forgive those who have offended us the most? Do we throw our loving arms around those who have hurt us? Or do we hold grudges and wonder how family and friends can expect to simply waltz back into our lives after stomping all over our hearts? Do we refuse to attend the party for those who finally return? Do we forgive?

Without forgiveness, our lives are stuck in gear, leaving us only an awkward glimpse of a possible road to be traveled, but no way to embark upon that journey.

The painful memories and injuries in our rear view often encompass our entire field of vision, making it impossible for us to go forward. Worse, we can obstruct everyone around us as they try to advance toward their destinations.

But it does not have to be that way. If we do offer forgiveness, we mirror our Father and our Creator, and reflect a unique joy and peace known only to those who behold the beauty of forgiveness.

And it’s not simply our children who may need our forgiveness.

It is our parents.

It is our spouses.

It is our brothers and sisters.

It is our friends.

It is our enemies.

It is the world.

If we’re looking for resolutions for 2015, let’s all try this one: let’s ask to be forgiven, let’s forgive ourselves, and let’s forgive everyone else. Let’s make 2015 the year of forgiveness.

Let’s run out to the road and start our journey back home.