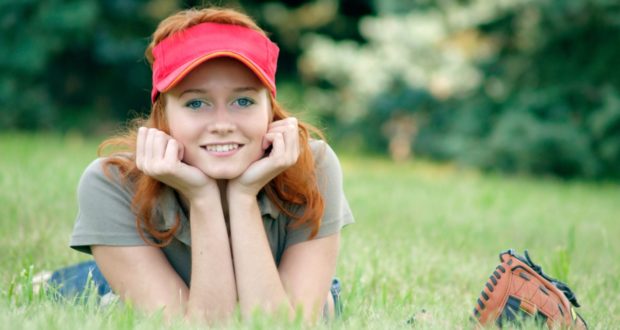 It is often said that baseball is a game between fathers and sons. I have a thirteen-year-old daughter named Philomena who would disagree, or would at least argue that this definition is incomplete.

The tipping point for her love of baseball occurred last year as the Cincinnati Reds were in the pennant race. In late September, as the importance of each game seemed to increase by the day, Philomena and the rest of the family would eat dinner, say the Rosary and turn on the Cincinnati Reds games. And she learned a lot.

She would ask me: “Why don’t the Reds pitch Cueto tonight?” or “Why don’t they use a pinch runner every time?” She patiently learned the difference between a change-up and a fastball; between a power hitter and an average hitter.

She was dazzled by Aroldis Chapman, the Cincinnati Reds closing pitcher who can hurl baseballs up to 105 miles per hour. Another of her favorite players, Billy Hamilton, runs so fast when he steals bases that many catchers never even bother throwing to second base because he’s already there when they look down there.

Philomena was saddened when the Reds lost their final game last October; we no longer had any game to watch after the Rosary. But she was excited this year when spring training started. She began to understand the magnitude of a baseball lover’s favorite four words: “Pitchers and catchers report.”

When Philomena and I were talking about the new season the other day, she reminded me that she had never been to a major league game. My heart sank. I am only able to make it to a game or two a year myself, and I usually take Lisa or one or two of the children, but somehow Philomena slipped through the cracks. I have taken her to college games, but never to the game’s highest level. So I told her that when the Reds came to town against the Washington Nationals, we would go. So she marked it on her calendar and anxiously looked forward to the day.

When the day came, we got in the car and drove out to the nation’s capitol. And when we walked into the park, I noticed Philomena’s face light up as she saw the sheer magnitude of a major league park. I saw how happy she was to see her favorite players in person. But we had one problem: the clouds looked dark and the weather forecast looked awful. And then it started to drizzle. Moments later, the umpire halted the game for rain, and the ground crew came out to cover the field. Though we were both a little afraid to mention it to each other, we both knew that this meant that our day at the park might be over, so soon after it began.

Yet, for the all the dismal forecasts, the clouds cleared away after about an hour.

After the rain stopped, I asked Philomena which prayer she prayed for God to clear away the clouds.

And she quizzically looked at me and asked: “How did you know I prayed, Daddy?”

“I know you pretty well Philomena. I prayed, too.”

The tarp was rolled back and the game began, going another four innings and letting Philomena see her favorite players play, and the Reds win. All in all—the time of her life. And her Dad had a pretty fun day, too.

Baseball is often criticized for being a boring game that moves so slowly—that lacks the flash and frenetic excitement of football. It lacks the constant running and scoring of basketball. But a funny thing happens when fathers watch games with their children: togetherness. For parents and children, baseball is often more about what happens off the field than what happens on it. Baseball allows for conversation between parents and children—and not always about sports.

Maybe that is its greatest attribute.