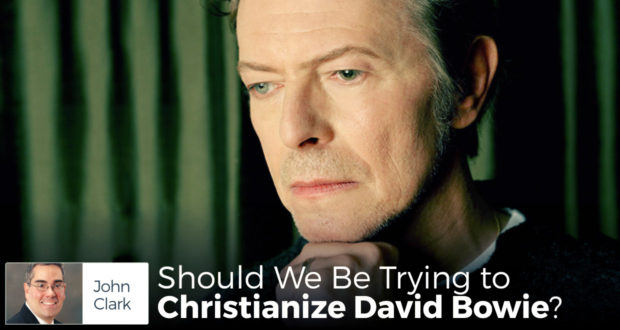 Should We be Trying to Christianize David Bowie?

Earlier this week, a musician named David Bowie passed away. After I heard the news, I did what I hope all Christians did: prayed for him.

I prayed for him not because he asked for my prayers, but because God deserves those prayers. The late atheist Christopher Hitchens specifically asked the Christian world not to pray for him, and yet I offered a prayer for him this morning.

I don’t wait for someone’s permission to pray for them; I have the mandate of God to do so.

But while praying is a reasonable, charitable, and necessary response, some Christians have gone much further. In fact, there seems to be an effort to glorify or even Christianize Bowie and his music, as many blogs and articles, including a recent piece in Crux recently witnessed.

The Crux article cites two examples of Bowie’s flirtations with Christianity. The first is that he wrote an album called “Station to Station,” with the title track “being a reference to the Stations of the Cross.”

Perhaps someone will claim to find some Christian significance in that song. I could not. In that song, the word “station” appears twice, and they occur in the same stanza.

“There are you, you drive like a demon from station to station.”

If this is a reference to Christianity, it does not seem a pleasant one.

Many readers may not remember now (and I don’t want to go into disgusting detail on this website as to why), but this film was condemned by many Catholics as the most offensive film to Christianity ever produced. Acting in this film might illustrate an interest in Christianity, but not in any sense that promotes the divinity of Christ, much less Catholic orthodoxy.

There is an old challenge to Christians that goes like this: If you were on trial for being a Christian, is there enough evidence for a conviction? Let’s be honest: there’s not a jury in the land that would indict Bowie.

When a musician dies, his passing often creates an impetus to acquaint or re-acquaint oneself with his work. Judging by the Catholic blogosphere, there is now an effort Christianize Mr. Bowie. How does that do a service to Christianity or truth? More to the point, how wise is it for the Christian to promote Bowie’s music to a new generation of would-be fans?

Especially considering that, as the Crux article quotes, Bowie admits to having engaged in Satanism. Are we concerned that this dabbling might have translated to the lyrics that our children might be listening to? Many of us don’t seem to be. On the contrary, those of us who are not terribly familiar with him and his work are called out on it.

When I began writing this column, I tried to think of how many David Bowie song titles I could name off the top of my head. I was able to think of only one. I also remembered that he sang a Christmas song with Bing Crosby many years ago. That’s about it.

Some would say this is a shame, or even a tragedy. As many journalists and bloggers have put it in some way this week: How could you possibly live your life without experiencing the genius of David Bowie’s music?

My answer goes like this. It is not a tragedy that some middle-aged Catholic guy can name only one song by David Bowie. What is a tragedy is that I can name more David Bowie songs than many Catholics can name books by Saint Thomas Aquinas.

That’s a silly point, some might think. Simultaneously admiring the work of both rock musicians and scholastic philosophers is possible, right? This isn’t a binary question, is it?

In his book, The Closing of the American Mind, Dr. Allan Bloom devotes a chapter to the effect that rock music has on the education of youth. Bloom concludes that listening to such music has the effect of making the student grow cold to the Western canon.

“Rock music itself and talking about it with infinite seriousness are perfectly acceptable. It has proved to be the ultimate leveler of intellectual snobbism…

My concern here is not with the moral effects of this music…The issue here is its effect on education, and I believe it ruins the imagination of young people and makes it very difficult for them to have a passionate relationship to the art and thought that are the substance of liberal education….

…But as long as they have the Walkman on, they cannot hear what the great tradition has to say. And, after its prolonged use, when they take it off, they find they are deaf.”

When you read this, it’s worth considering that Professor Bloom was not a flag waving Catholic traditionalist; in fact, Bloom claimed he was not even a conservative. He was simply making a pragmatic observation about the exposure of Western youth to a certain brand of music, using his experience with his own students.

Certainly, it is unfair to lump rock music together in a way that is often done. Whether its Metallica versus Manilow or Aerosmith versus Air Supply, we are examining contrasts, not comparisons.

That said, how does Bowie’s music stack up? What was his music about? He answered that question in an interview with the BBC in 2002, saying:

“Personally, I feel that I’ve consistently written about the same subjects for 35, nearly 40 years. There’s really been no room for change with me. It’s all despondency, despair, fear, isolation, abandonment.”

Despondency, despair, fear, isolation, and abandonment. Lest otherwise disinterested third parties think differently, please allow me to clarify that those are not the marks of the Church; nor are they considered the “Big Five” of the Western Canon.

Regarding this, I think that Bowie made Bloom’s point very well.