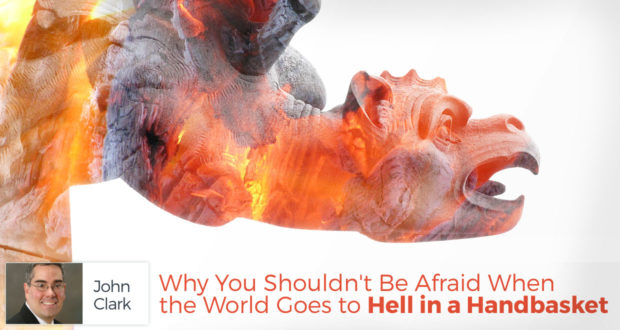 The story is told about a medieval saint who was granted the ability to see both angels and devils.

The saint traveled from city to city spreading the Faith, and each time seeing many—perhaps hundreds—of devils just outside each city’s gates.

However, upon coming to one notoriously evil city, the saint saw only two devils outside its gates. Expecting many more in such a place, the saint asked the devils: “There are only two of you?”

“This city is so evil,” the devil replied, “it needs only two of us.”

We are living in a world that has largely rejected the Catholic Faith. Those who steadfastly adhere to the Faith are attacked: by legal fiat in more civilized countries; by brutal force in less civilized ones. Christianity is being strangled in the region of its birthplace in the East; in the West, Christianity is mocked, derided, and worse.

As the medieval anecdote suggests, in evil times, the devils’ devilish work is often a fait accompli. Heavy lifting needs to be done in order to convince a soul to abandon the love and mercy of God, yet we seem to be living in a world of spiritual powerlifters. How many devils does the world need today?

In times such as these, do the devils—with legions in the same number as they have always been—have more time on their hands than they have had in the past? We are taught that idle hands are the devil’s workshop; have we reached a stage in which they themselves are idle, having little to do?

The spiritual forces of evil still have vast numbers. But if there are few left to tempt, what does that leave them to do? I have one answer, and it’s not pretty. On a human level, it seems like this leaves more time for them to devote to tempting the good men and women of the world. In the darkest hour of the night, that’s not the happiest thought.

But Ephesians 6:12 isn’t the end of the story. It’s only the beginning. It follows with a recipe for spiritual victory: our victory. The victory of God. Ephesians continues:

Therefore take up the whole armor of God, so that you may be able to withstand on that evil day, and having done everything, to stand firm. Stand therefore, and fasten the belt of truth around your waist, and put on the breastplate of righteousness.  As shoes for your feet put on whatever will make you ready to proclaim the gospel of peace.  With all of these, take the shield of faith, with which you will be able to quench all the flaming arrows of the evil one.  Take the helmet of salvation, and the sword of the Spirit, which is the word of God.

We should never worry. The shield of faith will quench the flaming arrows of Hell. We have God’s word on that.

Ancient Answers for a Modern Crisis

In truth, the answers to our modern times are terribly old: receiving the sacraments of Penance and Holy Communion, forgiveness toward others and ourselves, daily penitential acts, being instruments of peace, the Rosary, Holy Hours, love.

And don’t forget about hope. Do not drown in a sea of despair, because even with the threat of Hell and high water, we always have hope in this life. For ourselves, we have hope.

For our families, we have hope.

For our friends, we have hope.

For those who do not know God, we have hope.

For those who do not believe in God, we have hope.

For those who do not love God, we have hope.

For those who hate God—though it must incite the anger of every damned soul in Hell—as long as they are living, we have hope.

St. John Vianney, who was often assailed by demons, once said that the mere name of Saint Philomena was glorified in Heaven and feared in Hell. That’s worth pondering.

And neither should we. You and I are on a rescue mission from God.

And whether our enemy numbers two or twenty million, if we stay close to God, this is a mission that we will win.

Readers, what inspires you to keep your chin up?