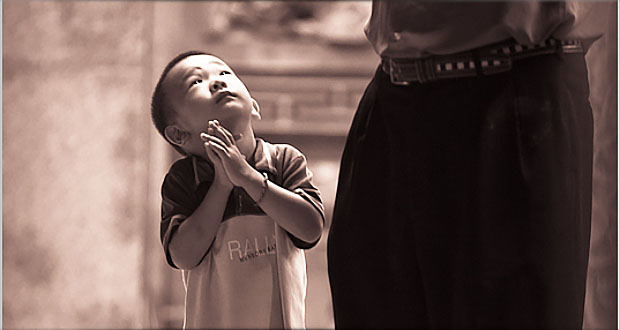 When I was growing up in the 1970’s, many Catholic parents took turns going to Mass: Mom might go to an early Mass while Dad stayed home with the kids; when Mom returned, Dad would then go, and Mom would care for the children. Presumably, the logic was that they could concentrate on the prayers of the Mass better without children, and that keeping the children home helped eliminate the distractions that children inevitably cause. This method seems to be coming back into vogue, and no doubt there is some valid motivation to it, but it comes with a cost.

Although Lisa and I are usually a little embarrassed by our children’s behavior, nearly every Sunday after Divine Liturgy someone comments about how well-behaved our children are. I always smile and answer: “Thank you,” but what I’m really thinking is this:

Did you and I just attend the same Liturgy?

If you missed it, let me fill you in. Mary Katherine (3) kept insisting on playing with Lisa’s teddy-bear keychain, along with audibly pretending to be the bear. Immaculata (5) was tired during Liturgy, and used the kneeler as a makeshift bed, which wouldn’t have been too bad except for the fact that she kept demanding a pillow.

Bonaventure (7) made a paper airplane out of the church bulletin during the second reading; and despite the consumption of a handful of Lorna-Doone’s and Fig Newton’s, along with a half bottle of Mango Madness Snapple on the way to church, Dominica (9) was characteristically hungry and thirsty during Liturgy, and she let us know about it several times during the homily.

By the way, thanks for not noticing that my hair is not exactly “combed.” I was planning on bathing this morning, but my “shower time” was spent on helping to find Demetrius’ dress pants and Tarcisius’ church shoes.

Yes, they could have behaved better, and I could have concentrated better. But I remind myself of Our Lord’s words in Matthew 19:14: “Suffer little children, and forbid them not, to come unto me: for of such is the kingdom of heaven.” Maybe those who compliment the children are confirming a belief that it is natural for children to attend Mass.

Sometimes I forget this lesson.

On Wednesday of Holy Week this year, my six oldest children got in line for Confession. Mary Katherine—who is three years old—didn’t want to be left out, so she walked over to the waiting line, and calmly and serenely—rare qualities for her—waited right along with them. I let her stand there for a minute or two, but then I picked her up and took her to the vestibule. I sat her down on a bench and explained to her that she wasn’t old enough to go to Confession. She would hear none of it—she folded her little arms, donned a petulant scowl of disapproval, and looked away from me, giving me the silent treatment. But as this scene unfolded, I realized something: she was right. Sometimes our three-year-old has a greater sense of the Faith than we adults do. Instead of taking her out of line, I should have stood with her and asked the priest, when it was her “turn,” if she could talk to him for a few seconds.

I reflexively made a classic blunder, falling into the misbelief that Christianity is more for adults than for children.

Christianity is full of ironies; here are a few that go through my mind.

First, I’m not delusional. I don’t inspire many people to be a better person, but I think that my children do. When I walk down the aisle with my model-esque wife and my nine wonderful children, I am just a reminder that some people are way too lucky. But it’s hard not to think about how much God loves us when you watch my little daughter Immaculata half-genuflect while getting to her pew, and then see her turn and smile at you.

Second, children are often reprimanded for their behavior in church, but I wonder if they’re better at it than adults. I’m not saying that children should make paper airplanes in church, but I do believe that their love of God is often more pure than mine. As we get older, we are tempted to lack trust in Jesus, even though our experience has confirmed that He deserves our complete and unshakable trust. It is commonly observed that children seem to have that naturally.

I’m not counseling distraction at liturgical events; I’m just pondering whether love is a loftier goal than perfect concentration. I know that there will be a time in my life when the children are gone and I will have the chance to really concentrate. But I also know that when this time arrives, I will miss the “distractions” I have today.

What “distraction” do you hold dearly in your memory?