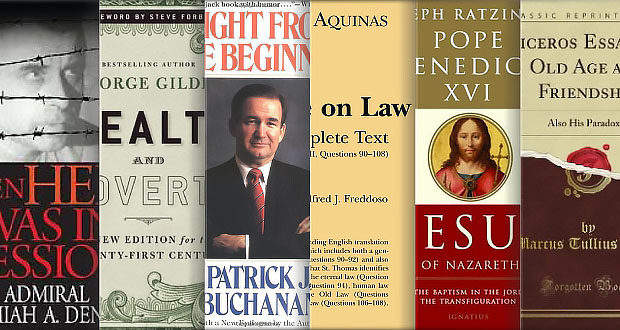 In the second part of his article, John Clark continues to explain the books which have had a great impact on his life.  Part 1 here.

‘When Hell Was in Session’ by Jeremiah Denton

When I applied to Christendom College in 1988, I was asked to write an essay about the book that had most changed my life. This book was my answer. Relating the account of Denton’s ordeal as a prisoner of war in Vietnam for nearly eight years, it is clear that his struggle to practice his faith and keep his sanity during this time were beyond heroic. At the time I read it, it was the perfect antidote to thinking that I “had it hard” in life. In years since, every time I hear someone claim that it is impossible to live as a faithful Catholic in this culture, I think back to this book.

I offered myself to God with an admission that I could take no more on my own. Tears ran down my face as I repeated my vow to surrender to Him. Strangely, as soon as I made the vow, a deep feeling of peace settled into my tortured mind and pain-wracked body, and the suffering left me completely. It was the most profound and deeply inspiring moment of my life.

‘Wealth and Poverty’ by George Gilder

It is a tragedy to me that many Catholics find their justifications for capitalism in the writings of atheist Ayn Rand. They should be reading George Gilder. Gilder illustrates not simply the moral defense of capitalism, but the moral imperative for capitalism. Gilder also beautifully illustrates how man’s God-given creative power combines with his love of family to produce wealth. His love and respect for entrepreneurship encouraged me to start my first company.

Under capitalism, the ventures of reason are launched into a world ruled by morality and Providence. The gifts will succeed only to the extent that they are “altruistic” and spring from an understanding of the needs of others.

‘Right From the Beginning’ by Patrick J. Buchanan

Patrick Buchanan has written about politics for almost of all his adult life, yet this family memoir is his most enjoyable writing. For me, this book illustrated that the way that someone is raised influences their politics.

There are sections in the book that struck me as eerily similar to my own childhood in the Clark family, like the following.

The problem with the Buchanan Dinner Table Debating Forum was endemic. Every one of us was opinionated; and we were all taught not to back down. Whatever our positions lost in logic might be recovered with invective. If you never quit an argument, presumably you never lost. To make oneself heard as the argument got intense, we got louder and louder. The only one who could halt the uproar was my father. Arguably the most opinionated of us all, he would invoke the authority of pater familias…After stating his views and impatiently tolerating several contrary opinions, he would silence the table, restate his view, and announce it as the final decision. The dinner conversation was a cross between a papal audience and “The McLaughlin Group.”

Call me crazy, but I (almost literally) teach this to my children in the cradle. Many of the political errors that Catholics make can be addressed with a simple reading of the Angelic Doctor’s section on law in the Summa Theologica. This section in the Summa is permanently etched in my mind, and influences all that I believe about the political and economic sphere.

Five pages into this book, I realized that this was the greatest modern work of Christology I had ever read. This analysis of the life of Jesus was so meaningful to me that I ordered 100 copies of the book to send out as gifts to our clients.

It contains a beautiful exposition of The Lord’s Prayer, the meaning of the parables, and the significance of events in the life of Jesus.

Pope Benedict’s examination of who Jesus is compels us to change who we are—and what we want out of life here on earth. It was a reminder to me that we create our own Heaven or Hell in own hearts and minds long before the day we die.

Earthly kingdoms remain earthly human kingdoms, and anyone who claims to be able to establish the perfect world is the willing dupe of Satan and plays the world right into his hands.

Now, it is true that this leads to the great question that will be with us throughout this entire book: What did Jesus actually bring, if not world peace, universal prosperity, and a better world? What has he brought?
The answer is very simple: God. He has brought God.

‘On Old Age’ by Cicero

Still considered one of the greatest orators of all time, Marcus Tullius Cicero seemed gifted in every arena in which he entered: politician, speaker, writer, and philosopher. His On Old Age was a good introduction for me to his brilliance.

As a teenager, few things frightened me more than the thought of old age. Yet somehow, after reading Cicero, I started looking forward to it, not as a time of dread, but as a time of wisdom, joy, and peace.

The fact is that old age is respectable just as long as it asserts itself, maintains its proper rights, and is not enslaved to any one. For as I admire a young man who has something of the old man in him, so do I an old one who has something of a young man. The man who aims at this may possibly become old in body—in mind he never will.

Your turn: Have you read these books? Got a favorite quote from them? What are your top three books that impacted/impressed you?
aquinas benedict books buchanan changed clark George gilder hell in Jesus john life my nazareth pat patrick sesson ten thomas was when xvi 2013-09-17
John Clark