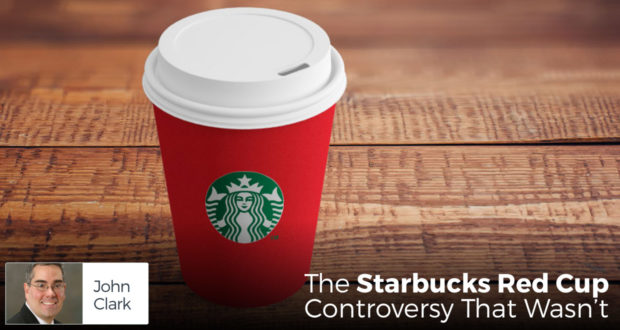 There is currently a rumor going around the internet. Surprise! It seems that Starbucks has changed the design of their coffee cups, and that Christians are none too happy about that fact.

Apparently, in previous years, the company used coffee cups that referenced the holiday season. This year, they are using a bright Starbucks red cup devoid of an explicit holiday reference. We are told that this has troubled some Christians to the point of a boycott.

Here’s why we’re not.

First, it might surprise many non-Christians to know that most of us Christians don’t have many mugs, pots, pans, or other crockery that say “Christmas” at all. When this “story” broke, I went to my own cupboard and searched for any cups I owned with the word “Christmas” on them.

Though I found other oddities—a ceramic cow creamer, a white croissant holder that I will probably re-gift (and I hope the recipient is not reading this)—I found no cups with the word “Christmas.” The closest thing I found was a cookie jar that bears the rotund countenance of Santa Claus that I was given last year, along with the gifter’s comment that she “thought of me when she saw it.” I’m sure she meant that in the best possible way.

Second, it might surprise many non-Christians to know that most of us didn’t find much religious significance in past years cups either. In the past few years, cups featured images such as snowflakes, a snowman winking, more snowflakes, and a boy sledding down a hill with a dog on his back.

But how were they Christian? Maybe those who are upset about this year’s cups found a religious significance in yesteryear’s winking snowman, but the rest of us feel a little left out by that reference.

What makes this year so different?

If I didn’t know better.

Third, most of us Christians are not the kind of people who are constantly looking for ways to be offended, by coffee cups or anything else. We don’t need to look, even if we wanted to look. Christians are being tortured and murdered all over the globe, especially in the Middle East. To put any energies into boycotting a company based on a plain red cup it to have one’s priorities a bit out of whack.

In closing, I’ll let the rest of the world in on a little secret on this talk of a boycott. In my circle of friends, and circles (or squares) like mine, we do tend to boycott $5 coffee.

We also tend to “boycott” Lamborghini, Rolex, and Neiman Marcus for very similar reasons. If I’m not buying expensive coffee this year, there might be a simpler answer that good ole’ Bill Ockham himself might appreciate: I need to get my washing machine repaired instead. It’s a less flamboyant reason, but alas, it’s no boycott.

Happily, I don’t know any Christians who are. And no one else seems to, either.