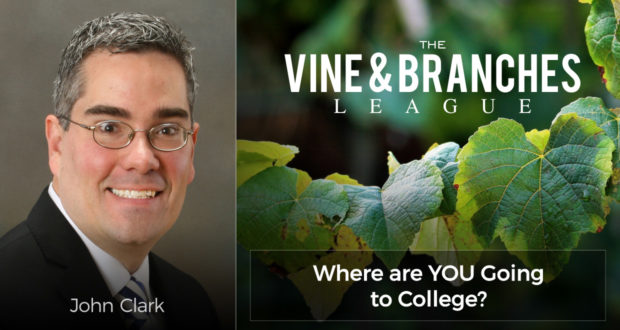 The Vine & Branches League: Where are YOU Going to College?

Being homeschooled before Seton started graduation ceremonies, I ‘graduated’ only once; it happened on a bright and sunny spring afternoon in May of 1992 on the campus of Christendom College.

As I looked back over the previous four years, I thought about how attached I had become to those people and that place. Between academic years, I used to count the days until summer was over and I would be reunited with my friends. But as I sat with my fellow graduates after the ceremony, there was nothing to count down any more. I had a feeling like claustrophobia in reverse: I felt like I was no longer confined to Christendom, and that was not a good feeling.

For four of the best years of my life, I was allowed to call it “home,” and now I had to leave. As I surveyed the brick buildings, the tiny chapel, and the paths of the campus that I had walked so many times with my future bride, I kept thinking and praying: “Dear God, I’m going to miss this place.”

Presumably, we are supposed to be happy at graduation ceremonies; they are viewed as a happy ending to a wonderful story. But to me, “happy ending” was a contradiction. I prefer happily-ever-after. No ending. Just happiness. If I could have discovered a way to stay there forever, I would have tried to do it. I had taken a trip to Catholic Narnia and had little interest in walking back through the wardrobe.

Much time has passed since graduation, and I was beginning to forget how much I loved it there. But suddenly, a funny thing happened: I remembered. I fell in love with it again.

Just two years ago, our oldest son, Athanasius, faced the decision of where to attend college. I prayed that Athan would go to college where he could play baseball, and Lisa prayed that Athan would go to Christendom. Simply put, Lisa prayed harder. Put better, God answered the right prayer of Lisa, and rightly answered the wrong prayer of her husband.

I recognized this as soon as Athan began studying at Christendom. He would come home and talk to me about his classes; and in those discussions, I remembered why I loved Christendom. It’s not only the people and the culture; it is that you can spend four years drinking in the intelligence of Saint Thomas, the compassion of Saint Augustine, and the majestic beauty of Dante. And if you are given the grace, you can love the truth.

There are few things more exciting than watching someone grow in his Faith, and at Christendom, I saw it every single day. Now, I see it again. And from the perspective of a parent, I assure you that there is an inexplicable joy that a Catholic father experiences when he walks into his living room and sees his son reading Aquinas’ Treatise on Being and Essence.

Athan’s time at Christendom has made me appreciate my alma mater even more. And after twelve years of homeschooling, during which I taught him his Faith, Athan now teaches me many of the things that I had forgotten about mine.

Graduates, I relate this to you because some of you are about to go to college. That is exciting, but you should realize that there may be no better place to lose the Catholic faith than the average college. In many cases, college can be a spiritual ghost town. Some of these institutes of lower learning are openly, insistently, and proudly hostile to Christianity. They are places where, as Lewis might say, it is “always winter but never Christmas,” because their insistence on the rejection of divine things leaves the students frozen in the mouth of despair.

You might think you’ll make more money going to a prestigious school, rather than to a solidly-Catholic one. And you might. But if making lots of money is a top priority for you, you need to change priorities, wherever you go to school. All too often today, the mad dash for the medium of exchange only results in exchanging spiritual goods for material ones.

You might think you’ll be held in higher esteem by going to a prestigious school, rather than to a solidly-Catholic one. And you might. Yes, these are not Ivy-League schools. But schools like Christendom are in what I call the Vine and Branches League. Isn’t that the one you want?

We parents keep asking our children: “What do you want to do?”

But we’re asking the wrong question. We need to think about a question that Jesus posed to the Apostles two millennia ago, and asks each of us again at this very moment: “Who do you say that I am?”

Answer that question. And then we’ll make less important inquiries.

I am often asked, “What will Athan do after he graduates?” My answer is simple: “He will defend the faith.”

Graduates, the college you attend will almost certainly be one of the most important and longest-lasting decisions you ever make. Please pray for the grace, wisdom, and courage to make the right one.