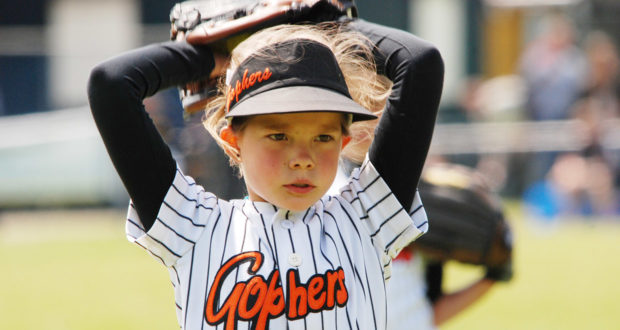 Transitions: How Homeschooling Broadens Your Horizons… As a Parent

Philomena (10) and Dominica (8) recently began playing in a girls’ softball league. Before one of their games, I took a bucket of balls and began to pitch to them to prepare them to hit.

Seeing that I was willing to help, the head coach asked if I could stay and coach first base. Having coached baseball at a number of levels, I figured that softball was pretty similar.

To the uninitiated, it might seem that baseball and softball are almost exactly the same. They aren’t. There are three bases and home plate. That’s where most of the similarity ends.

Sure, the smaller fields and the underhand pitching are obvious differences, but there are more subtle ones as well.

Baseball has its own language. For instance, a short fly ball is called a “can of corn.” A batted baseball that is easy to field is called a “room service” grounder. The slang words for home run include: “going yard,” “Jack,” or “bomb.”

Softball has an entirely different lexicon. After a line drive over her head, one of the girls said, “If it were a snake, it would have bit me,” which I was told meant that the ball came very close to her. Baseball has one or two chants—things like “Hey, batta, batta, batta…swing batta.”

Softball has so many chants that—even though the girls shout them pretty constantly—after five or six games, the girls have rarely repeated themselves.

Coaching styles that proved effective at the college level don’t translate well to 8-year-old softball players. At the college level, you can tell your players: “If you don’t start taking this game seriously, maybe we should all go home!”

But it’s hard to say these words to someone who is wearing a pink batting helmet with a pony tail coming out the back. So instead, you find yourself saying things like: “Try to take a little lead off of first base after the pitch, Honey,” or “You can steal second base now if you want, but if you don’t want to, that’s OK, too.”

For example, at last week’s game, Philomena and Dominica each told me: “Daddy, it was fun running to first base; but it was even more fun because you were there when I got there.” I don’t remember my sons ever telling me that (although they would have probably regarded taking only one base as a failure).

If a sport were judged by its camaraderie, softball wins hands down. The 2011 Major League Baseball Official Rule 3.09 reads: “Players of opposing teams shall not fraternize at any time while in uniform.” This rule does not seem to have filtered down to girls’ softball.

In fact, after each game, all the players from both teams gather at the pitcher’s mound and shout out a poem:

Not that they don’t take it seriously—they do. In fact, after a game that saw Dominica and Philomena get their first hits of the year, we went out to celebrate at a fancy restaurant (at least by Front Royal standards).

As we ate dinner, we noticed that there was a television that was showing the World Series. As one of the batters for the Texas Rangers came to the plate, Dominica asked me, “Daddy, am I a better player than that guy?”

“Not yet, Dominica,” I answered, “but he’s had a lot more practice than you.”

I think that in the back of their minds, they are open to the possibility of being the first two women major leaguers in history.

Sometime between trying to memorize the softball chants and walking to the concession stand (or, as Dominica calls it, the “Confession stand”) for Ring Pops, something dawned on me. I didn’t expect to like being an assistant softball coach.

But after a few games, I’m hooked. It’s just one in a long line of activities that my children have liked first, and that I have liked as a result.

Even the academic subjects come alive once again for us homeschooling parents. As a friend of mine recently commented, communicating history, philosophy, mathematics, theology, and even grammar facts to our children can be fun. Sometimes it’s birthday party fun and sometimes it’s rewarding fun. But done properly, it is fun.

I like helping my children learn; I like discovering what interests them, whether it’s science or softball. This process also allows you to transition yourself into a better father.

Transitions make many people uncomfortable, but they are often a chance to better yourself. I always had the most respect for the coaches who were willing to adapt to their players, instead of forcing the players to adapt to them.

Bill Parcells, the former coach of the New York Giants, was a good example of that principle. He coached the players he had—not the players he didn’t have. Coaching like this sounds obvious, except for the fact that many coaches never make good transitions, and sadly, many of them don’t even try.

Regardless of the players, they insist on doing it their way. But coaches who insist on “their way or the highway” soon find themselves hitchhiking.

Fatherhood is a lot like coaching. You always retain the important ethical principles, but you adapt your fathering style to your particular child.