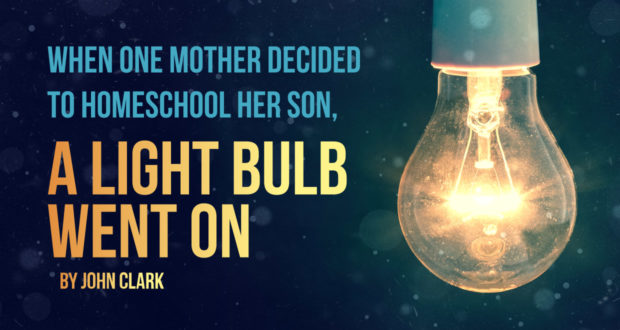 When One Mother Decided to Homeschool Her Son, A Light Bulb Went On

In a Midwest school many years ago, a little boy sat in class asking many questions, but getting few answers.  Though he was very inquisitive and had a sincere desire to learn, his teacher grew increasingly frustrated with him, which caused him to question his own intelligence.

But after hearing that his teacher regarded him as a dunce, the little boy’s mother decided to pull him out of school after just three months of formal education.  Instead, she decided to educate him at home.  Though she didn’t believe in the educational methods of the school, she did believe in her child.

While some dream of achieving a single patent in their lifetimes, Edison is credited with over one thousand patents.  Though his inventions include the phonograph, the motion picture camera, and a series of advances to the telegraph, his most notable invention was the first feasible incandescent light bulb.  People sometimes comment that something “changed the world,” and it is often an overstatement.  Yet, in the case of Edison’s light bulb, how can we conclude otherwise?  There is scarcely a single area of human endeavor that failed to benefit from this invention.

Tom Philbin, author of a book entitled “The 100 Greatest Inventions of All Time,” ranks the light bulb as the second greatest invention in history, second only to the wheel.  Philbin pithily sums up the light bulb’s significance by saying: “The light bulb changed night, in a sense, to day.”

When you look today at all the marvels of modern technology like the smartphone, the DVD, high definition television, GPS, Wi-Fi, and magnetic resonance imaging, you could certainly claim that Edison played a role in many of them.  His inventions were a springboard to the creativity of others.  Though he passed away in 1931, Edison’s work continues to make a powerful impact that is felt every day around the world.

That observation raises some questions.  How much of Thomas Edison’s impact was due to his mother?  How important to the equation was homeschooling?  Admittedly, we will never know how far Edison would have gone if his mother had not homeschooled him.  All we know for sure is this: Mrs. Edison homeschooled her son, and her son grew up to be one of the greatest inventors in the history of the world.

Looking back, I wonder if Mrs. Edison encountered many of the objections that mothers hear today.  How will Thomas be socialized?  How will you teach him subjects that you don’t know yourself?  Is it healthy for a child to spend so much time with his mother?  Mrs. Edison did have a background in teaching, but it is interesting that with that background, she decided that the best place for him was at home.

Though it will always be hard to quantify the influence of his mother, Edison made a comment later in life that speaks volumes.  He reminisced: “My mother was the making of me. She was so true, so sure of me; and I felt I had something to live for, someone I must not disappoint.”

It is unrealistic to think that we could go very far in life without someone who believes in us.  Those who doubt us seem to be many, and their skepticism often adds to the fact that we doubt ourselves.  The Edison family illustrates a central truth: homeschooling is a structure of belief.  A mother’s decision to homeschool is commonly born of a belief in her child, and this belief is born of love.

You Catholic homeschool moms should always remember something.  Edison’s greatest invention lit the world with mere lumens, but you are helping your children learn and love their Faith to become a light to the world.  From a spiritual perspective, our world is very dark; we seem to be reminded of this every day.  But you are making a difference.  You are the ones lighting a candle rather than cursing the darkness.  Your love is making all the difference, not merely for your family, but for the whole world.