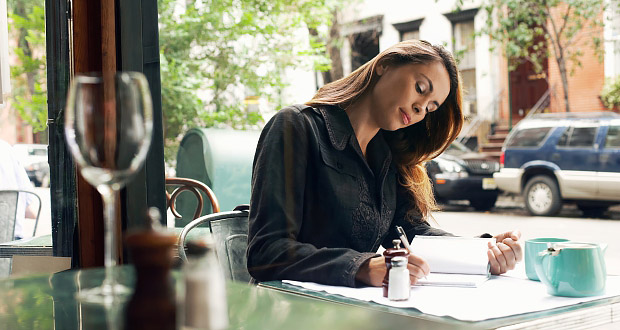 Why don’t more people write moving pieces? I think that one of the answers is that it’s risky. When you leave a part of yourself on the page, and someone doesn’t like it, it is hard to accept that fact—when people don’t like your work, you sometimes feel like they don’t like you. That can be a bitter pill to swallow.

Emotive literature opens the writer up to criticism and attack. I can tell you this firsthand. There are people who really dislike my columns, and they don’t mind telling me. If you are a writer, they won’t mind telling you either; even Shakespeare had his share of critics.

My advice: take the risk.

I’ll tell you why. I saw a friend over the weekend who said he had just finished my book Who’s Got You? At first, this struck me as odd, since he mentioned he started the book months ago. But he said that he didn’t want to rush through it; instead, he wanted to savor each chapter. What he was really saying was that he wanted a daily reminder of why his life was good.

That is why I write.

Sometimes I’m asked about whether it concerns me that I am so open about my life in my columns. “Aren’t you afraid to expose your life that much to readers?” they ask. In truth, I’m afraid not to. I don’t write generic columns about husbands and wives—I write about Lisa and myself. Doesn’t the reader deserve to read something real? From my perspective, generic writing can only have a limited amount of warmth and genuineness.

As a writer, you are not compelled to write about everything. Years ago, Lisa and I lost a child to miscarriage. We have always envisioned that she is a baby girl, who we named Christiana Cherubim Clark, and that she is waiting for us in Heaven. After the miscarriage, I began to write letters to her.

When I am having a bad day, or a great day, I will pick up the pen and write to her in my journal. Maybe one day I will print them, but for now, they are the private secrets of a daddy who is madly in love with a little girl on the other side of eternity.

You don’t have to write about everything, but some writers are at the best when they do. Consider C. S. Lewis’ memoir about losing his wife—the hauntingly beautiful A Grief Observed, in which he writes:

“No one ever told me that grief felt so like fear. I am not afraid, but the sensation is like being afraid. The same fluttering in the stomach, the same restlessness, the yawning. I keep on swallowing.
At other times it feels like being mildly drunk, or concussed. There is a sort of invisible blanket between the world and me. I find it hard to take in what anyone says. Or perhaps, hard to want to take it in. It is so uninteresting. Yet I want the others to be about me. I dread the moments when the house is empty. If only they would talk to one another and not to me.”

C. S. Lewis is an example of how exceptional writing and empathy can be so powerful when they meet. One need not choose between syntax and sympathy; but a depth of feeling is not replaceable by mere style.

Good writing often involves putting yourself into your writing; it is to write what only you can write. C.S. Lewis was willing to do that, to the great benefit of his readers. We need to encourage our children to do that.

I write a column from a husband and father’s perspective, but I would love to see columns from teenagers about homeschooling from their perspective. We need columns from homeschoolers. You homeschoolers have the power to enrich the lives of others. It is often said that the goal of music is to uplift the soul; it strikes me that the goal of writing is similar: it is to make an impact on the reader, and if you’re really lucky, to change the world.

And you can do it.