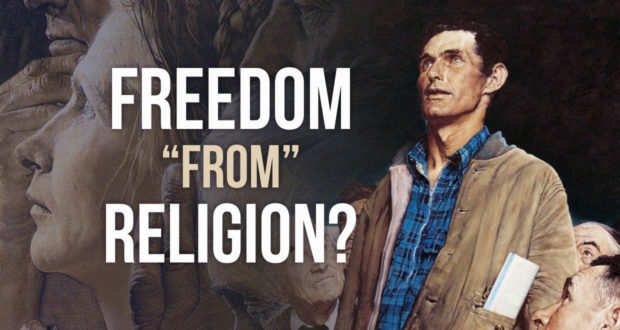 Does the Constitution Guarantee Freedom *from* Religion?

I don’t think that anyone should be required by government to follow church laws and regulations, such as being prohibited from eating meat on Friday or even having to be married according to church laws before the state would recognize the marriage. In other words, freedom from religion should mean that you are never directly required to participate in the religious life of a particular church or of any church. I think that type of freedom from religion is perfectly consistent with the First Amendment, natural law, right reason, and the teachings of the Catholic Church.

You can see this in the reaction to the Hobby Lobby decision. The majority of the court in the Hobby Lobby case said that the government cannot force employers to provide benefits to their employees which violate the business owner’s beliefs. The decision was consistent with both the First Amendment and the Religious Freedom Restoration Act, which says that the government may not impose burdens to religious practice unnecessarily.

The argument was made, though, that allowing employers to choose not to provide certain benefits gives companies (in the words of the New York Times) “an unprecedented right to impose their religious views on employees.” This is factually tenuous, since Hobby Lobby was not prohibiting the use of birth control, merely declining to pay for it.

Once you start going down that road, where does it end?  If that standard were universally applied, it would allow for religious freedom only in those cases in which religious beliefs had no impact on anyone else. You probably would be all right going into your room and praying. But what if your religious beliefs caused you to teach your children at home? That would have quite a large impact on others. It would certainly impact your local school system, which would lose funds it otherwise would have had.

According to the logic of the Hobby Lobby dissenters, if you don’t put your children into public school for religious reasons, you are imposing your religious beliefs on that school, which is losing money because of your beliefs.

Religious beliefs, if they are truly and deeply held, will almost always influence how someone lives. It will influence with whom they associate, what products they purchase, what things they watch, and how they think about public policy issues. If the Hobby Lobby dissenters are correct, then many times every day, by the decisions they make and the attitudes they hold, religious believers are violating the rights of others to be free from religion.

When the Constitution guarantees freedom of speech, does it also guarantee freedom from speech? Do people have an inherent right to be protected from the speech of others, so that no one would have a right to speak if anyone else objected to hearing it? Or how about freedom of assembly? Does that right only pertain when the assembly does not inconvenience anyone else?

We must now work and pray in order to keep our God-given and Constitutionally-recognized freedoms.