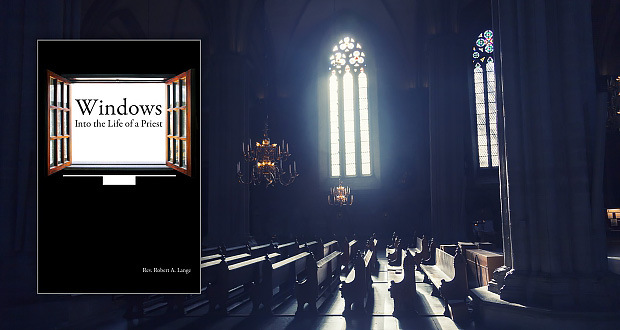 His Father Saw Him from Afar: ‘Windows Into the Life of a Priest’

Kevin Clark shares how God looked out for youngster, Fr. Robert Lange, and saved him from many mishaps. Read more in his memoirs!

When my mother and father heard about Christendom College—a small, new lay-run college in Front Royal, Virginia—they thought it might be right for my oldest brother, Ken. They enrolled him in the college, and they both made the trip from Ohio to Virginia to drop him off at the campus.

This was 1980, and Christendom had fewer than 100 students, and had only recently moved to the Front Royal location.

In fact, it wasn’t much of a campus. It was an old hunting lodge, which had been sold as a training camp to the AFL-CIO. When Christendom College brought the property, they “improved” it by adding some mobile home trailers to serve as the dorms for the female students.

When my parents arrived with Ken, Christendom was more a college in name than in fact, judging by their campus facilities. My father, disheartened at the condition of the place, wanted to turn around and drive home with Ken.

My mother, however, said that since Ken was already there, they ought to leave him and give the college a try. They could always come back and pick him up later anyway.

Through her association with Warren and Ann Carroll, my mother became the director of Seton Home Study School, which Ann Carroll had founded in Manassas, Virginia.

At the time my mother took over as Director, the home study division had about 250 students and was run from a single room.

The moral of this story is that sometimes seemingly very small events can have a profound effect on the future.

If my parents had made the perfectly reasonable decision to bring Ken back home, then the future for my family, and possibly for Seton Home Study School, would have been very different. One might chalk this up to Providence.

The message that Providence shapes our lives is the main theme of Fr. Robert Lange’s book, Windows into the Life of a Priest. Unlike the Providence mentioned above, which perhaps could be called indirect, Providence repeatedly intervened in a more spectacular and more direct way for Fr. Lange—by saving his life twice before he was a teenager.

On a hot night in August of 1949, Mrs. Lange took her five-year-old son Robert to the park to play. He was merrily swinging, when his mother thought she heard a clap of thunder.

Instinctively, she pulled Robert off the swing and brought him over by her. Moments later, a tree fell down and crushed the swingset on which Robert had just been playing.

On the second occasion, when he was twelve years old, he and his brother were fooling around with the car. Somehow, Robert got up on the hood of the car as his brother drove at a rather high rate of speed.

His brother, perhaps being scared at the dangerous situation which had developed, decided to hit the brakes. Robert could have been thrown off and killed, or perhaps been thrown forward on the pavement and run over and killed—in any case, leaving the hood of the car would likely have ended up with “and killed.”

However, his arm somehow latched onto the hood ornament of the car, which allowed him to stay on the car until it stopped. His arm was ripped up, but the rest of him remained the rest of him.

Events which seem unlikely run through Father’s life like a mountain stream after a brisk rain. He was not especially devout as a youngster and never really considered being a priest.

In fact, in early adulthood, he moved away from the faith entirely and moved into a life that included use of illicit drugs. After living the aimless life for some time, at the age of thirty-three he found himself adrift and needing a purpose.

“I had been trying to live as the world teaches, to live for today, and that brought me no happiness, only deeper despair and emptiness. The world had nothing to offer.”

But the Church did have much to offer, and he finally made his way back in the Barque of Peter.

He still, however, had no inkling that he was meant to be a priest. One night, he heard a voice suggesting that the way he could increase God’s presence in the world was to become a priest.

Besides the fact that he was already by then older than the average priestly candidate, he had another problem. Since his teenage years, he had been a stutterer.

Although a stutterer being called by God is not unheard of—it is widely supposed that Moses was a stutterer—it still poses rather difficult problems for an aspirant to the priesthood. He did his best in the seminary, but when the time came for him to speak in public, his stuttering was often quite bad.

Several months before he was scheduled to be ordained, the rector of the seminary called him in to tell him that someone who could not read at Mass could not be ordained a priest. Fortunately, Fr. Lange received some speech coaching, which helped him at least enough to allow him to be ordained. What God wants, He brings about.

Throughout his priesthood, Providence has continued to guide Fr. Lange’s life. His book is filled with stories of “coincidences” which end in the salvation of a soul which might otherwise have been lost.

The life of every priest is the story of a man and of a soul who said “Yes” to God, just as Mary said “Yes” so many years ago in Nazareth.

Fr. Lange’s book reminds us that every priest has a very special story to tell, of a call answered, and an invitation accepted.

Perhaps it can also help us to answer the calls and invitations in our own lives.

Windows into the Life of a Priest is available through Amazon.