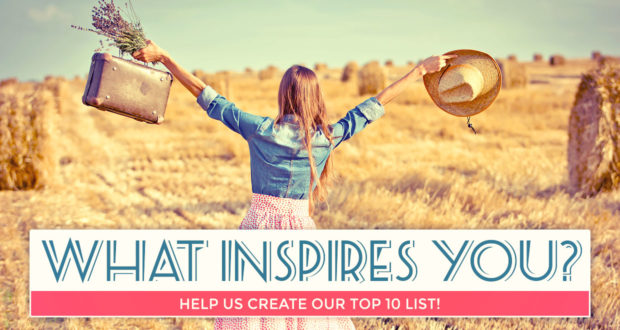 What Inspires You? Help Us Create Our Top 10 List!

Seton families! What are your favorite inspirational books, movies, television programs, videos, speeches, etc.? What are the stories, true or fictional, which make you want to become a better person?

If we can get a good number of responses, we will report the Top Ten list. Comment below!

A few weeks ago, I wrote an article which included a quote by the character Aragorn from the movie The Return of the King:

I included this particular passage in the article because I find it very moving, in a way that’s difficult to fully articulate. I have never been in the military and have never stood in front of an advancing army. But there is something universal that is being communicated by this quote. All of us have struggles.

When we look at virtues such as courage, and faithfulness, righteousness, fortitude, and honesty, we can consider them as mere ideas. We can see the inherent goodness of each of these virtues. But if we want to stop pondering virtue, and come to love these virtues so that we might practice them consistently in our own lives, we must see them in action.

There is a beautiful scene in the movie As Good as it Gets in which Helen Hunt’s character and Jack Nicholson’s character are having dinner. He is a curmudgeonly sort, and she asks him to stretch his limits by giving her a compliment. In reply he says to her, “You make me want to be a better man.” A look of wondering astonishment comes over her face, and she says to him, “That’s maybe the best compliment of my life.”

Live What You Love

Recently, I watched a video of Australian pop singer Megan Washington giving a talk before a very large audience. She spoke eloquently about her struggle with stuttering and how she has lived her life in “mortal dread of public speaking.”

There is an old saying, “Your wish is my command.” But even better for the Christian life is to say to God, “Your command is my wish.” Because, if we love the things of God, then we will not follow His Laws merely because He commands, but because we deeply feel the goodness and rightness of what is commanded. If we love honesty and faithfulness and righteousness, then it will be no great struggle against our inclinations to practice those virtues. Love will impel us toward right action. This is what St. Augustine means by “Love, and do what you will.” (Homily on the First Epistle of John)

What Are Your Favorites?

But beyond merely showing virtues in our own lives, we need to put in front of them examples of virtues–certainly in lives of the saints, but also in movies, television programs, and books which portray virtue as a thing to be loved.

So, Seton families, what are your favorite inspirational books, movies, television programs, videos, speeches, etc.? What are the stories, true or fictional, which make you want to become a better person?

If we can get a good number of responses, we will report the Top Ten list.