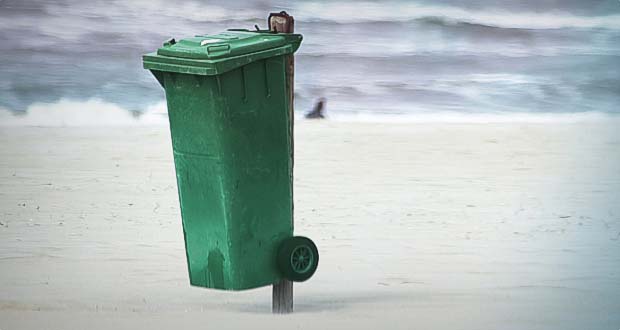 The other day, I performed a task which is very common for the father of a large family—I took my trash to the dump. I am not someone who is constantly snooping around the dump trying to find a couch with one more month of wear in it, or a lamp that needs only the cord and the base and the socket replaced. My trips to the dump are to rid myself of things, not to find things that I can bring back home with me.

However, on this particular trip, I was surprised to find that the dump is not only a place to leave refuse; it is also a repository of wisdom. On this particular trip to the dump, I saw a sign that in only ten words teaches profound lessons about moral philosophy. The sign on the side of the trash hopper said, “Everyone knows that recycling is the right thing to do.”

That was it, merely ten words. I do not know who wrote them. Perhaps it was a slogan devised by a child trying to win a recycling contest. Perhaps it was written by a nameless laborer in a cubicle at an ad agency in New York. Perhaps it is an overlooked passage from Immanuel Kant’s Critique of Pure Reason. However, the writer is not as important as the writing, because in these ten simple words are contained a crash course in moral philosophy.

“Everyone knows that recycling is the right thing to do.” Let us start with Everyone. Everyone knows this; there is no one who does not know it. No one can say, “Of course, I would have recycled, if only I knew it was the right thing to do.” No, everyone knows it. No one can plead ignorance of the principle. Of course, this leads us to ask how they know it. Who taught them this, where did they learn it? If it was taught in a school, then how did the school manage to teach everyone? Was there not even one person who was missed? No, not a single person. “Everyone knows.” We can only conclude that the principle is innate, is known without being taught, is written on the heart, because only in this way could everyone know.

We now look at “knows.” This implies certainty. Everyone knows it, not believes it, or thinks it could be correct. No ones says, “Hmm, I wonder if recycling is the right thing to do. If only I could be sure.” Not remotely! Everyone knows they should recycle. They know it in their bones; they never doubt it.

Now we get to the heart of the matter, however: “recycling.” Not only is morality certain and universal, it has specific content: recycling. Some philosophers have maintained that even if there is a moral law, humans cannot know exactly what that law requires. Some might say that the essence of morality is doing unto others what we would have them do unto us. But this is vague, and gives no explicit instructions. According to the dump, however, we can know exactly what is expected of us. It leads us to ask, if we can know that recycling is demanded by the moral law, then what else is demanded? Sadly, on this question, the dump remains silent.

Next we move to the “right thing.” The dump here sets up a binary system of right and wrong. If recycling is right, then not recycling must be wrong. Note that it cannot be the case that everything is right. If everything were right, then the dump would be telling us nothing. It would merely be setting up recycling as one of the infinite universe of right things. No, the dump would not waste our time with such notions. “Right” makes no sense unless it is paired with “wrong.” The dump knows this.

We might think that what the dump has told us already is sufficient. The dump could have said simply, “Everyone knows that recycling is the right thing.” Yet, the dump is not finished. It moves from a simple expression of a moral principle to an actual challenge to each person. That final “to do” means that every person is not called merely intellectually to assent to recycling, but to take up the cause in his or her own life. The rightness of recycling sets up a universal obligation to recycle.

What I especially admire about the dump is that it uses no qualifiers in its moral pronouncements. It does not say, “Perhaps recycling might be a good thing to do, but that’s just my opinion,” or “Some people feel that you should recycle, but aren’t sure.” It does not even appeal to public opinion, by saying “82% of those surveyed believe that recycling is the right thing to do, based on a survey of 672 adults, margin of error plus or minus 4 percent.” No, it does not do any of these things. Like an oracle from on high, handing down the principles of a good life, the dump knows what it knows. It does not ask us whether we agree. It merely tells us what we must do.

It has been said that if you laid all the moral philosophers in the world end to end, they would not reach a conclusion. The dump suffers from no such qualms. It does not wring its hands, and wonder whether or not it should impose its morality on others.

My advice to you is this. If you ever have a particularly difficult question of morality or ethics, do not consult the so-called professionals. Just load up a bag of trash in your car, and head to the dump.