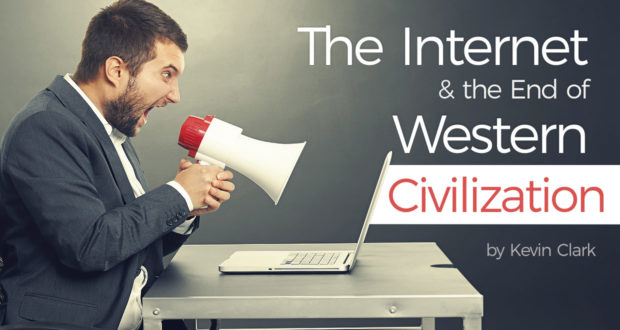 The Internet and the End of Western Civilization

Before about the year 1995, it would have been the odd person who was routinely chastised for being an idiot, or a bigot, or evil incarnate.

In 1995, most people were not yet on the Internet. If someone wanted to insult you or your mother or your sister or your ancestors they would have had to do it to your face. Oh sure, they could theoretically have insulted you in writing; however, they would have had to sit down and write a letter and then mail it to you, which is a lot of trouble to go to in order to insult a person.

It seems that the world over the last twenty years or so has become coarser and meaner. There is something about the anonymity of the Internet which moves people, who one assumes are perfectly nice to those around them, to viciously attack other human beings through posts on the Internet.

It goes without saying that anyone who believes anything politically incorrect—such as traditional marriage—will be savaged if they dare post online. I myself, for reasons known only to God, have from time to time tried to defend traditional marriage on the website Slate, which for those who don’t know—well, if you don’t know what Slate is, you are far better off.

Rarely after making such a post does anyone engage with the arguments I have made. Rather, it’s just a bunch of name-calling, anything from idiot to bigot to Nazi. I have even had people call for my untimely death.

‘Christians by our Love’…?

But it’s even worse than that. You don’t have to be fundamentally opposed to the world view of another person to be savaged. You just have to disagree about anything. Maybe not even disagree, just not entirely agree, or have reservations about an idea, or just not be fully committed to one side or another.

And it’s not just non-Christians or non-Catholics who do it. Try reading the comment sections of Catholic bloggers or online Catholic magazine websites, and you’ll find plenty of accusations, recriminations, name-calling, etc.

The old song says, “They’ll know we are Christians by our love” but people reading comments on these blogs will see a lot that isn’t love.

Even SetonMagazine.com is not immune from this. We moderate the posts, so the most uncharitable don’t get through, but still it’s hard to read comments which assume the worst possible motives about a writer.

I can understand, if not condone, the use of personally abusive language from atheists. They don’t think they’ll ever have to answer for their actions so it doesn’t really matter.

And since being personally abusive can discourage people with differing views from commenting, personal abuse makes a certain amount of sense from a purely Machiavellian viewpoint.

However, I don’t understand such actions from Catholics, who do believe they will be judged on their actions. Matthew 5:22 says that he who calls his brother a fool is in danger of hell fire. I certainly don’t want to be in danger of hell fire over a useless post to someone I don’t even know.

I’m sure I have, from time to time, written posts which were less than charitable. But, whenever posting I try to remember the following:

I never write up a comment and immediately post it. I read it and reread it. While I am checking for typos, I also check for any hint of condescension or meanness. If there is any, I take it out, or rephrase it.

And here’s a last thing to remember. They say that everything you put on the Internet stays there forever. That’s true, but there’s a more important log being kept in Heaven, and everything you write goes in there, too.

Let’s make sure our permanent record is one that will do us proud.