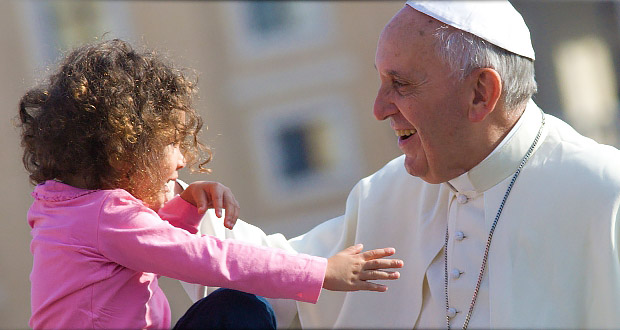 What Can We Learn from Pope Francis?

There is currently a program on network television called Undercover Boss.  If you haven’t seen it, the premise is that the CEO (or another high muckety-muck) of some large company goes undercover within the company to see how things really run.  By visiting various offices and doing various jobs with the employees, the CEO finds out whether his or her vision is being put into practice throughout the company.  Because the employees don’t know they are talking to the CEO, they are very vocal on how things work and what changes they would make.

What is most interesting about the show, though, is how profoundly most of the CEO’s are affected by the experience.  These CEO’s are ambitious and driven men and women who have worked hard to get where they are.  But what they see everyday at the corporate offices is only the big picture.  They don’t see the little picture, which is the way in which their decisions affect each of the employees and their families.

Focused on the Big Picture

The CEO, by necessity, is focused more on the company than on the employees, because if the company does not survive, then it can have no employees.  But that fact cannot obscure the other fact that the lives of each of those employees—each of those children of God—is of surpassing value, and cannot be fully subordinated to “the company.”

The CEO’s who go undercover are good-hearted people.  They care about their company and their workers and they take their responsibilities seriously.  And yet, sometimes they have forgotten to ask themselves everyday how their decisions will affect their employees.  They have not forgotten out of malice, but simply because they have not trained their spirits always to place people first.

I thought about Undercover Boss while reading Pope Francis’ new Apostolic Exhortation, Evangelii Gaudium.  In the Exhortation, Pope Francis strongly criticizes economic systems which place philosophical principles above the value of human beings.  Pope Francis writes, “The current financial crisis can make us overlook the fact that it originated in a profound human crisis: the denial of the primacy of the human person!” (Evangelii Gaudium, # 55)

Although not many of us are tasked with being the CEO of a company, or with trying to manage the ongoing worldwide financial crisis, we are the CEO’s of our own lives, and we do deal with our own crises.  In everything that each of us does, we must always, at every moment, remember the primacy of the human person of which Pope Francis writes.

The Primacy of the Human Person

There are many current areas of public policy that touch on Catholic social teaching.  Immigration, unemployment, abortion, the definition of marriage, and health care are just a few of these areas.  In each case, the principles that we put forth can lead to impacts on human beings.  While upholding principles of mercy, justice, and common good, we must understand and be sympathetic to those impacts.

Perhaps what Pope Francis understands is that the world may not listen to principles, but it might respond to love.  Once the world sees Christians as the greatest lovers of humanity, then perhaps the world will be ready to hear about the Ten Commandments.  The necessary corollary is that whatever truth we proclaim, it must be proclaimed with love and understanding.  It can never be proclaimed harshly or without compassion.  To paraphrase St. Paul, if I speak with great eloquence about traditional marriage, and have not love, I am become as sounding brass, or a tinkling cymbal.  And if I should defend religious freedom, and have not love, I am nothing.

The primacy of the human person, however, is not merely in the public realm, but in the private realm as well.  It is perhaps most needed within our own families.  As a parent, it is natural to have great plans and hopes for our children.  But each child is an individual person, with his or her own hopes and dreams.  The dreams of children are not always the same as the parents.  Sometimes even spouses themselves differ on hopes and dreams.

In my own little world, when I find myself being disappointed by others, I try to remind myself that people don’t exist to do my will.  They are individuals who have their own wants and needs and foibles and imperfections.  That understanding usually leads me to try to look at things from their point of view, and to try to think about what they are feeling.  If I can see things from their point of view, then at least I won’t feel frustration or resentment.

In thinking about others, perhaps we can do no better than the Prayer of St. Francis:

(If you find yourself with a Kindle and would like something new to read, Kevin Clark has 3 books available: Numbers Up (a murder-mystery), Will of God (an historical novel about the Plymouth Colony), and Could You Not Watch? (a collection of short stories).)