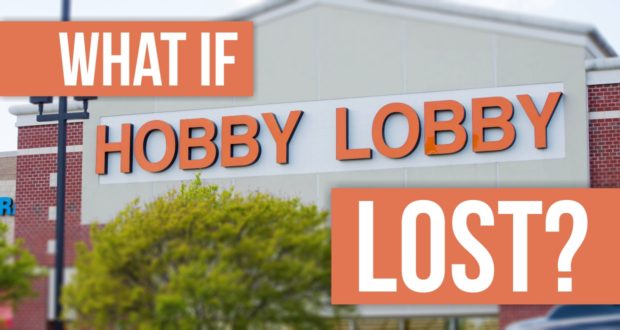 What if Hobby Lobby Had Lost?

Suppose that, in the time of the Roman persecutions of Christians, there had been a Roman Supreme Court (the Supremem Iudicatorium Romanus, if you will). When the first Christians were arrested and scheduled to be executed, they could have appealed their cases to the Iudicatorium, which would have scanned the writings of Romulus and Remus for the original intent of the founders of Rome, or perhaps used the evolving standards of the Senatus and Populus Romanus to decide the case. Lawyers would have argued back and forth about what the meaning of “est” is. The judges would have eventually come to a decision, which they would have handed down from their high places to a waiting populace, eager to see which way Antonius voted.

Suppose further that the decision of the Iudicatorium had gone against the Christians. What would the Christians have done? Would they have said, “Well, the Supremem Iudicatorium has spoken, so we will need to go ahead and sacrifice to Jupiter”? That seems rather doubtful. More likely, they would have continued in their impertinent ways and been torn apart by the wild beasts, just as they actually were. The Roman people, watching from the stands of the Colosseum, would have said to themselves, “At least they had a fair trial.”

What if They Caved?

This brings us to our second thought experiment. Suppose that the Supreme Court had decided against Hobby Lobby.

Suppose that the Court had concluded that, all things considered, it was within the power of the government to order Hobby Lobby to purchase abortifacients for its employees. What would Hobby Lobby have done?

It would have had no more appeals, so it dutifully would have obeyed the Court and the HHS rules and supplied the abortifacients in question. Right?

Of course, it wouldn’t have done so—no more than the early Christians would have obeyed a Supremem Iudicatorium ruling. The government could not make the owners of Hobby Lobby violate their firmly held beliefs of conscience. Just as the Roman government could only punish, but not compel, so the American government could only punish Hobby Lobby for their beliefs, not compel them to abandon those beliefs. Hobby Lobby could either have offered its employees non-conforming insurance, or have dropped its employee insurance plan completely. Since offering non-conforming insurance incurs a massive fine, Hobby Lobby’s only real course would have been to drop insurance and incur a small fine. This would have pushed its 16,000 employees onto the public exchanges, where many would be substantially worse off than before—but at least they would get their abortifacients.

Another organization which is under attack is the Little Sisters of the Poor. The government wants to compel the Sisters to provide contraceptive coverage to their employees.

The Sisters have given their lives to serving Christ by serving the elderly poor. As their website says, “By our vow of hospitality we promise God to consecrate ourselves exclusively to the service of the elderly poor. We welcome them into our homes, form one family with them, accompany them from day to day and care for them with love and respect until God calls them home.”

For their service to humanity, the Little Sisters of the Poor are part of what the National Organization for Women (NOW) calls the “Dirty 100”. No doubt the Sisters are occasionally dirty from cleaning up after those they serve, but if cleanliness is next to Godliness, then the Sisters are surely the most immaculately clean among us.

What does NOW think the Sisters would do if they lose their challenge to the HHS contraception mandate? Do they honestly suppose the nuns, whose religious commitment has inspired them to give all that they have to serve others, would suddenly abandon that religious commitment?

Although it may sound crazy, I believe that is exactly what NOW expects. I think that NOW does not believe that the Sisters are serious when they claim a religious objection to doing evil. I think that NOW and others like them expect that once the power of the law is brought to bear against those who dissent from the modern sexual revolution, the dissenters will simply give up. They believe that legal punishments will dissuade those who cling to outmoded beliefs, and serve as an example to others to stay away from those beliefs.

The Hobby Lobby case was decided in favor of religious freedom. But court decisions will likely not always go that way. Eventually, the courts will try to compel believers to do what those believers say is prohibited by God. NOW, and really the rest of the world, doesn’t believe us when we say we must follow the laws of God rather than the laws of men.

The Roman martyrs truly believed what they said. Of that, there could be no doubt. Their belief, their love, and their sacrifice conquered an Empire. The day is coming, and it will not be long, when the world will find out if we modern Christians believe what we say.