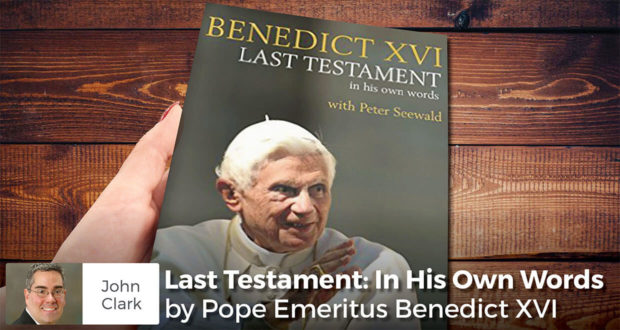 Last Testament: In His Own Words by Pope Emeritus Benedict XVI

John Clark reviews the new book-length interview, just released in English, and he discovers a gem: the incredible story of a magnificent man.

Last Testament: In His Own Words, the long-awaited book-length interview of Pope Emeritus Benedict XVI, was officially released in English earlier this week.

There will be many reviews of this book across the Catholic airwaves and blogosphere in the coming days and weeks, and I’m guessing that some of them will focus on various papal missteps or would-be Vatican conspiracies. That’s unfortunate.

When I read this interview, I came away with an entirely different point of emphasis from anything conspiratorial—and that is of the man, Joseph Ratzinger, himself. This is a personal examination of one of the most intriguing figures of the past century.

Prior to reading this interview, I had not fully realized Pope Benedict’s health issues. He had mentioned his failing health and overall weakness for some time, but many were not aware that he suffered a brain hemorrhage in 1991 and received a pacemaker in 1997; currently, he is suffering a significant hearing loss and is completely blind in one eye.

Indeed, he has much to suffer, as the burdens of the papacy perhaps continue even after his famous resignation.

The interviewer asks Benedict a wide-ranging series of questions, covering topics such as growing up in Germany, his ordination to the priesthood, his time as a professor, his friendship with Pope Saint John Paul II, the struggles and joys of the papacy, and his current days as the pope emeritus. It comprises a fascinating biographical sketch.

It is clear from the interview that some of Benedict’s happiest moments are found in writing theology; of course, that fact could be concluded simply by reading his theology.

He speaks of silence as though it were an old friend that he wishes he had spent more time with throughout his life. He explains:

If I want to write or think, I only need silence. I must be able to be alone. I must concentrate on books in peace, then thoughts are able to ripen.

The interviewer, Peter Seewald, asks questions of great importance, but sometimes it is those questions of seemingly less importance that give us more insight into the person of Joseph Ratzinger.

For instance, the interviewer inquires about his favorite artists, favorite comedian, and his favorite pieces by Mozart and Bach. It is refreshing to see the more lighthearted side of Pope Benedict.

There were a few parts at which I laughed out loud and mentally applauded, like this one:

Seewald: When and by whom was the text of your resignation speech written?

Seewald: Why in Latin?

Benedict: Because you do something so important in Latin.

At times, the interview can be likened to Cicero’s masterpiece On Old Age set to the music of theology. Cicero observed that wisdom comes with age, and Pope Benedict agrees—with a twist:

Seewald: How close have you come to Jesus?

Benedict: [Deep intake of breath] Well, naturally that is relative to different situations, but in the liturgy, in prayer, in contemplations for Sunday’s sermon, I see him directly before me. He is of course always great and full of mystery. I now find many statements from the Gospels more challenging in their greatness and gravity than I did before….On the one hand, in old age you are more deeply practised, so to speak. Life has taken its shape. The fundamental decisions have been made. On the other hand, one feels the difficulty of life’s questions more deeply…but then one also feels the greatness of Jesus Christ’s words, which evade interpretation more often than before.

With this language, Pope Benedict is perhaps preparing his listeners for experiencing the Socratic moments of truth that old age can bring—if we have the humility. And humility is another thing that comes across in this book very distinctly.

The Pope Emeritus is so humble and unassuming that, at times, the reader can lose sight of the fact that he is reading an interview with not only a former pope, but also an excellent candidate for a future Doctor of the Church. Instead, it seems as though we are hearing the words of an old country priest.

Seewald: Does a Papa emeritus fear death? Or fear dying at least?

Benedict: In a certain respect, yes. For one thing there is the fear that one is imposing on people through a long period of disability. I would find that very distressing. My father always had a fear of death too; it has endured with me, but lessened. Another thing is that, despite all the confidence I have that the loving God cannot forsake me, the closer you come to his face, the more intensely you feel how much you have done wrong. In this respect the burden of guilt always weighs on someone, but the basic trust is of course always there.

As a paradox of faith, the more one grows closer to God—the more one comes to have a deep love and affection for God—the more he becomes aware that he has offended his beloved in the past. This is an authentic development on our spiritual journey, but as he explains, the response must be trust.

Pope Benedict is asked what his favorite prayers are, and his response provides a fascinating insight. He mentions three prayers—one of which is a prayer by Saint Nicholas of Flue. Until I read this passage, I had never heard of him.

But I discovered that Nicholas of Flue was a highly-esteemed political figure in fifteenth century Switzerland who turned down a governorship numerous times. Instead, with the endorsement of his wife and ten children, he became a hermit where he lived in a small cell and was nourished with no food other than the Blessed Sacrament for almost two decades. He turned down a powerful office to be alone with God. And so it is with Joseph Ratzinger.

There is much more to say about the interview, but suffice it to say that it is an important read for Catholics at this time. I read the interview over the course of about twenty-four hours, at the end of which I felt like I had spent the day with the pope emeritus.

That’s not a bad way to spend a day.