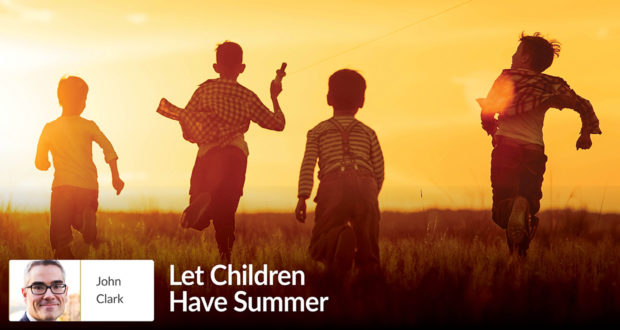 John Clark admits he might have become a better reader, writer, or mathematician if he had forsaken carefree and joyful summers spent with his family but…

As summer approaches, many parents will note that their children are a few days/weeks/months behind in their lesson plans.

And they will be tempted to keep homeschooling until all thirty-six weeks are finished—even if it takes until August. My advice: try to fight the urge. Let children have summer.

When I was growing up, our school year finished around Memorial Day and didn’t start up until Labor Day. My family spent a large portion of every summer vacationing at my grandparents’ house in Cleveland.

During those summers, we slept late and watched game shows like The Price is Right and Press Your Luck when we got up in the morning. My grandmother—a late sleeper herself—would make a dramatic, Scarlett O’Hara-type entrance into the living room every morning. She’d go around the room and hug and kiss each one of us, hold our faces in her hands, and—bringing our eyes to hers—greet each one of us by name, as though she hadn’t seen us in years.

I still remember—and desperately miss—her hands, her eyes, her smile, and her words, “Johnny, I’m so glad you are here with me!” (Of course, my faith and my hope tell me that the next time we see each other, the grand entrance will be mine. But I have no doubt that she will be waiting with that same wonderful greeting.)

After the morning sun had a chance to warm the water, we swam in the pool behind our grandparent’s house in the afternoon. We cooked hot dogs on the grill for lunch and then dove right back into the pool. After swimming wore us out, we went inside and played charades or Monopoly with our grandmother. We helped my Aunt Annie fish the fallen leaves out of the swimming pool. We listened to my Uncle Bob (a man who was physically paralyzed very young, but remains one of the strongest men I have ever known) tell funny anecdotes.

More than Dinner at the Table

At dinnertime, we would all sit down at a huge dining room table and hear our grandfather teach us about politics, law, and the American legal system. The man raised nine children, seven of whom became attorneys—and they didn’t mind arguing their cases at the dinner table. My grandfather, who sat at the end of the table, was happy to adjudicate their disagreements. From the other end of the table, my grandmother would wax eloquent about then-President Ronald Reagan and the recently-departed Padre Pio—two of her contemporary heroes.

Sometimes after dinner, we’d stay up late and play cards with our Dad as my Mom watched an old movie with our grandfather. For my father, a game of cards—whether we played Whist, or Pinochle, or Hearts—was a multi-hour marathon.

As the night wore on, every so often, my mom would come into the room in the middle of a hand of cards and say, “Bruce, these kids have to go to bed!” My Dad would respond, “Kay (my father’s favorite nickname for his wife), they can sleep all day tomorrow!” Twenty minutes later, the conversation repeated with the exact same words and the exact same inflection, as though both of them had practiced this verbal exchange a thousand times before—which they had.

On nights we didn’t play cards, we listened to my Uncle David tell ghost stories before bedtime, and we listened to E. G. Marshall’s CBS Radio Mystery Theater as we drifted off to sleep. To this day, I often turn on that same show at night and think back to
those moments.

Over the summers, we went to ceramics classes, fireworks shows, botany exhibits, softball games, and an occasional wedding. We played Space Invaders on the Atari and watched the hapless Cleveland Indians lose almost every night—despite my father’s assurances that “This was their year!” We visited our cousins, told jokes, and made cookies. If there was a favorable exchange rate with the Canadian dollar that year, we’d go to Canada for a week-long fishing trip.

And very little of this would have happened if my parents had decided to homeschool us year-round—if we had spent summer “catching up.” Maybe we’d all be smarter if they had; maybe we’d be more educated; maybe I’d be better at reading, writing, or arithmetic. Maybe. But I doubt I’d be a better person without those carefree and joyful summers spent with my family, during which I learned lessons I didn’t even know I was learning.

The American education system’s push to conduct year-round schooling strikes me as a uniquely awful idea which suggests that learning is something done only in a classroom. You homeschooling parents already know that’s not true.

So please, take it from me. Let children have summer.