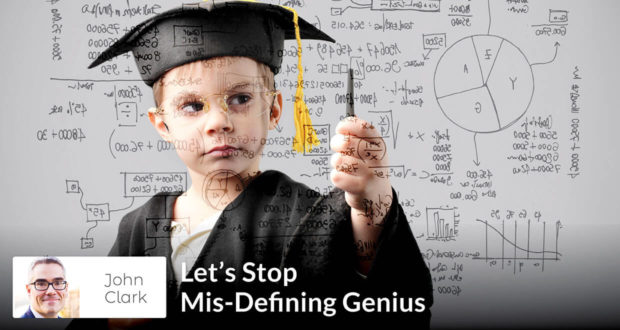 Our job as parents is to stop pigeonholing genius to classrooms and books, embrace the countless forms of genius, and see the brilliance in our children.

Aesop might refer to what follows as “sour grapes,” but I’m willing to run that risk. Here it goes.

In America, there is a radical overemphasis on the relationship between academic grades and overall intelligence. Test scores—typically, the largest component of final grades—receive a hyper-focus. In many circles, whether you are deemed “smart” depends on how well you do on tests.

Here’s where the part of the sour grape comes in: I never did well on tests in college. In fact, I don’t remember ever receiving an “A” on an exam. Not once. If final grades depended on quizzes and tests alone, I would have failed out of college.

How did I graduate?

Allow me to explain with a story.

One summer afternoon when I was about eight years old, my brother Kevin returned to the house after going out to the mailbox. After he opened one of the envelopes, he began cheering with excitement jumping with joy.

The letter informed him an article he had submitted was going to be published in a magazine. I was excited, too; after all, this meant—at least in my mind—that my brother was going to be famous.

Maybe it was at that moment I decided to be a writer. But I knew I would have to work very hard to even come close to Kevin’s level of talent. In fact, his essays were so powerful that I couldn’t understand how anyone could disagree with his conclusions.

Sure, other people could write, but Kevin’s words leaped from the page and danced. Reading his writing, I began to realize that there was an ethereal, transformational potential in the printed word, and I wanted my words printed. Thus began my quest to learn the art of writing.

By the time I started college, I could write comparatively well, and some teachers helped me write better. In fact, by the time I was a sophomore, seniors sought me out to help with their theses.

Over the years, I was able to counter “C”s and “D”s on tests with “A” papers. To many of the teachers, I must have seemed like two different students: the student who wrote polished papers, and the student who handed in lackluster tests. For that reason, I always thought I’d have to write at a graduate level because the teachers otherwise thought of me as a “C” student and my papers had to overcome that perception.

But my papers faced a more daunting task: they had to overcome my own perception of my intelligence. After all, my thought process went, if I regularly receive Cs and Ds on tests, how smart could I possibly be? For me, the sad part of that interrogative is not that I once asked it, but that other kids still do. That’s a crying shame.

Let me be clear: I am not proposing that scoring high grades on tests does not spell intelligence. I am simply saying that tests are not the only yardstick for genius. Not even close. Yet with all the “teaching to the test” nonsense in America, we keep insisting that they are. The truth, however, is far different.

As playwright David Mamet put it, “Society functions in a way much more interesting than that multiple-choice pattern we have been rewarded for succeeding at in school. Success in life comes not from the ability to choose between the four presented answers, but from the rather more difficult and painfully acquired ability to formulate the questions.”

Mamet alludes to a much broader truth: academics is not the only form of genius. Far from it. Millions of people have failed out of school or quit school, only to illuminate the world with their brilliance: inventors, artists, writers, coaches, athletes, directors, scientists, lawyers, philosophers, and mothers and fathers who have authored children.

What they had was creativity—a special form of genius that often finds no home in the classroom.

It’s not simply that God has given each of us a talent; He has graced each of us with a genius. It’s a pity we fail to recognize that—or worse, deny it. When others deny genius in us, it’s deflating; when we deny genius in ourselves, it’s stifling. Of course, it often happens in that order.

Our job as parents—in fact, our job as humans—is to recognize the unique brilliance in our children. And in each other. We need to stop pigeonholing genius to classrooms and books. We need to embrace the fact that there are countless forms of genius.

And the greatest of these is love.