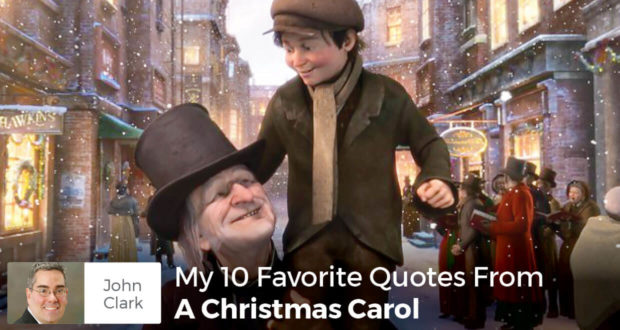 My 10 Favorite Quotes From A Christmas Carol

In reading Charles Dickens’ famous story, “A Christmas Carol,” John Clark discovered that not only had it aged well, but became more relevant than ever.

Ever since I saw A Christmas Carol performed at The Ohio Theatre when I was a little boy, I been in love with the story.

Since then, I’ve listened to the CBS Radio Mystery Theater version, I’ve seen the Henry Winkler version, the George C. Scott version, and the Disney version. I’ve even seen it performed at the famous Ford Theatre in Washington, D.C. But until this year—and I’m ashamed to admit this—I had never read it.

Yes, the Dickens version. And yes, the book was better. Why? Because, as I discovered, no version can capture the artistry of Dickens’ words—to try is to fail.

Also, as I read it, I discovered how relevant that A Christmas Carol still is; in fact, it might be more timely now than ever before. In particular, ten passages stood out for me. Here they are.

1. “External heat and cold had little influence on Scrooge.

No warmth could warm, no wintry weather chill him. No wind that blew was bitterer than he, no falling snow was more intent upon its purpose, no pelting rain less open to entreaty. Foul weather didn’t know where to have him. The heaviest rain, and snow, and hail, and sleet, could boast of the advantage over him in only one respect. They often ‘came down’ handsomely, and Scrooge never did.”

It is a criticism of Dickens that he overdraws his characters, including Scrooge. Some might even argue that A Christmas Carol is a thinly-veiled screed against capitalism and that Scrooge is the bogeyman of the free market.

But if Dickens were overdrawing, what should we make of Pope Leo XIII, who wrote half a century later that: “Hence, by degrees it has come to pass that working men have been surrendered, isolated and helpless, to the hardheartedness of employers” and went on to point out that “a small number of very rich men have been able to lay upon the teeming masses of the laboring poor a yoke little better than that of slavery itself.”

Not in a world where bankers receive nine-figure bailouts followed by seven-figure bonuses on one day and criticize those executives who strive to pay a living wage the next.

In truth, bailouts are to free market capitalism what Jansenism is to Catholicism: anathema.)

2. “Scrooge was not a man to be frightened by echoes.”

In a metaphorical sense, echoes are a reminder of the past. At the beginning of the story, Scrooge was not frightened by the past—though he should have been. And so, in some way, should we all be. Until we are frightened by the echoes of our sins, how can we understand the mercy of God? And until we embrace that mercy, the echoes will not go away.

3. “The chain he drew was clasped about his middle. It was long, and wound about him like a tail; and it was made (for Scrooge observed it closely) of cash-boxes, keys, padlocks, ledgers, deeds, and heavy purses wrought in steel….

It can be a chain of envy, and its links can be formed with houses, cars, and jewelry—all those material objects that we hated others for possessing. The question isn’t whether we have a chain, but what it consists of. And how to stop forging it.

At many and increasing levels, our society abhors conscience. It rejects, mocks, denounces, and rejects conscience again. In the eyes of some, the only properly-formed conscience is no conscience at all. But Scrooge’s restless night is a reminder that conscience is a jealous voice, and we ignore it at our own peril.

5. “Are there no prisons?” asked Scrooge.

Yes, Mr. Scrooge, there are prisons. But none so brutal as the penitentiary of an impenitent heart and soul.
Scrooge didn’t care how some people had arrived in desperate straits—only that one had arrived. Of course, the great irony is that if Scrooge had opened his wallet—and his heart—many of the desperate straits could have been avoided.

6. “The school is not quite deserted,” said the Ghost. “A solitary child, neglected by his friends, is left there still.”
Scrooge said he knew it. And he sobbed.

The tears of Scrooge should remind us of the lonely ones at Christmas. As we celebrate the birth of Jesus, maybe we should all try to befriend one more person. Each of us has the power to ensure that one less person might be lonely this Christmas, and throughout the year. That’s better than a power; it’s a superpower.

7. “The air was filled with phantoms, wandering hither and thither in restless haste, and moaning as they went….Many had been personally known to Scrooge in their lives. He had been quite familiar with one old ghost, in a white waistcoat, with a monstrous iron safe attached to its ankle, who cried piteously at being unable to assist a wretched woman with an infant, whom it saw below, upon a door-step. The misery with them all was, clearly, that they sought to interfere, for good, in human matters, and had lost the power for ever.”

Dickens’ idea—that the inability to help others constitutes an eternal burden—is a powerful one. The average day offers us so many opportunities to help others that we may not even really stop and think much about them. But the chance to offer a friendly glance, a smile, or a kind word, will come today.

The question is: Will we embrace the chance?

8. “He resolved to lie awake until the hour was passed; and, considering that he could no more go to sleep than go to Heaven, this was perhaps the wisest resolution in his power.”

There is an antithesis to “sleeping in Heavenly peace”; and that is, lying awake in hellish chaos. It’s a theme that arises in the great literature from the ancients to the moderns. The solution is repentance, which Scrooge would soon realize.

9. “He went to church, and walked about the streets, and watched the people hurrying to and fro, and patted children on the head, and questioned beggars, and looked down into the kitchens of houses, and up to the windows, and found that everything could yield him pleasure. He had never dreamed that any walk— that anything— could give him so much happiness.”

“Everything could yield him pleasure.”

Dickens’ words will resonate with the penitent who has just been absolved in the sacrament of Penance and regained the state of grace.

This Christmas, many penitents will stand in lines for Confession. When they step out of that Confessional, you may not see them dancing, but their hearts are doing what Fred Astaire could only imagine. Mere gravity is hopeless against tethering that joy. One need not try to fly; the tough task is staying on the ground.

The story of Scrooge is a story of repentance. But the best stories of repentance are fact. Not fiction. As I have said, I love this story. It is regarded as some of the finest prose in the English language.

But please remember this: If Scrooge’s story moves you to sacramental repentance this Christmas, the greatest chapter wasn’t written by Charles Dickens. It will be written by you.